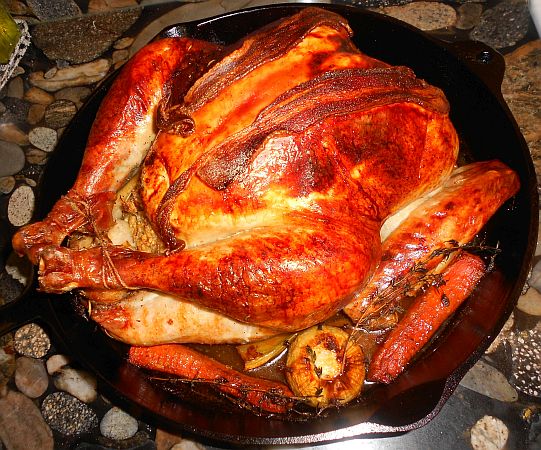 "Let the board groan, let the belly bulge, let our hearts be thankful – lest we forget what our ancestors went through to achieve that first Thanksgiving. The fullness of our fields and fruit trees, of our dairies and hatcheries load the table, and this is a day for family and friends to make welcome the stranger." –- A Treasury of Great Recipes by Mary and Vincent Price, page 281

As a long-time movie buff and recently christened cast iron cook, I've had a great respect for famous horror and B-movie actor Vincent Price. Not only was he an unforgettable presence in film history (known from such classics as Otto Preminger's Laura and The Invisible Man Returns, and especially such horror classics as House of Wax, The Fly and Return of The Fly, The Raven, and many others. However, he was also known in social circles as a gourmet cook, and his labor of love was A Treasury of Great Recipes. This was a lovingly constructed and written cookbook he made for his wife. This book has since been accepted as one of the great cookbooks of the 20th century…and in early 2015, I acquired a copy of this magnificent tome. 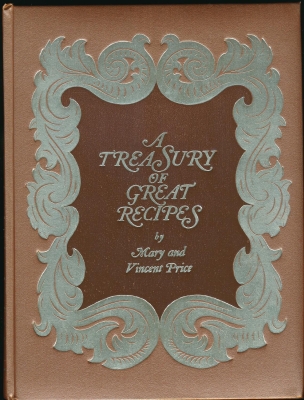 A Treasury of Great Recipes is a compilation of recipes from great restaurants around the world, "adapted for the American kitchen." This wonderful tome contains recipes from all around the world, certain to suit any palate; though it especially favors meat-laden dishes brimming with delicious decadence. However, if there is one recipe from this book that has seen far more kitchens than any other, it would be Mssr. Price's recipe for Thanksgiving roast turkey. This recipe comes from the Wayside Inn of Sudbury, Massachusetts. The book includes several recipes from this country inn, and for personal appeal it certainly grabbed me. I happened to grow up in the town adjacent to Sudbury, and when my brothers and I were young, we spent many a Saturday or Sunday trekking across town to play in the woods surrounding the Wayside Inn and its accompanying grist mill. In my later days, I returned to the same town and once again lived within a stone's throw of this marvelous place that gave me so many memories. As such, I absolutely could not pass up the opportunity to make this dish, presenting it here in a tribute to the great Vincent Price.

(This recipe is not a word-for-word transcription of the recipe from the book, so as to avoid any copyright issues.) 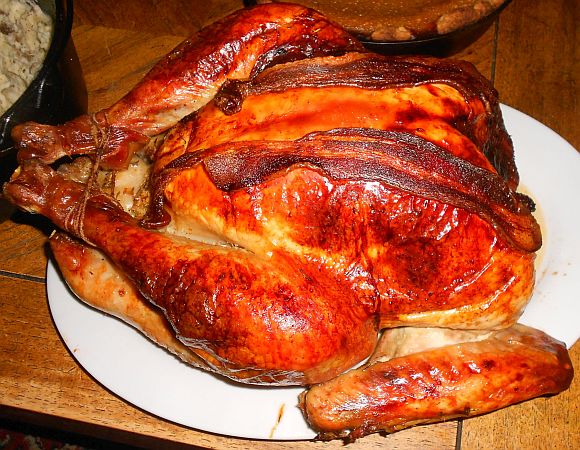 Trim the ends from the celery and carrots, and cut them in half. Stick cloves into onion. Add water to pan. Stir in paprika (to give the turkey a dark roasted color). Add basting and roasting mixture to the pan: onion with cloves, celery, carrots, bay leaves, parsley, and thyme.

The original recipe says to cook the turkey in the preheated oven at 325 degrees for "10 to 20 minutes per pound," but that doesn't produce the desired time of "3 1/2 to 4 hours" listed in the recipe. When I cooked this recipe, I set a probe thermometer to alarm when the temperature of the turkey reached 180 degrees Fahrenheit. (This is higher than the recommended 165 degrees F, but I find that with a large bird such as a turkey, the higher temperature is necessary to ensure the meat is thoroughly cooked, all the way to the bone.) With a 12 pound turkey, the temperature reached 180 degrees F in exactly three hours. In 2015, I also used this recipe to roast a 16-pound bird in four hours. This would give a time estimate of 15 minutes per pound. The recipe also states to baste the turkey every 30 minutes with drippings from the pan, though this is more to produce a crisp brown skin rather than to keep the bird from drying out.

It's actually a simple recipe, as it doesn't call for oven temperature adjustments, flipping the turkey, placing the bird into the oven legs-first, or other additions that we see in most modern-day roast turkey recipes.

– based upon Roast Turkey Wayside Inn recipe from A Treasury of Great Recipes, by Mary and Vincent Price, published in 1965 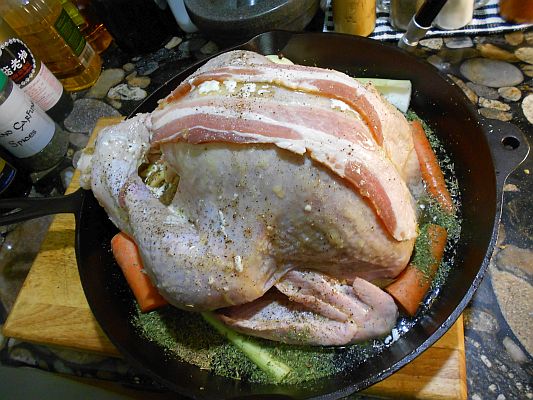 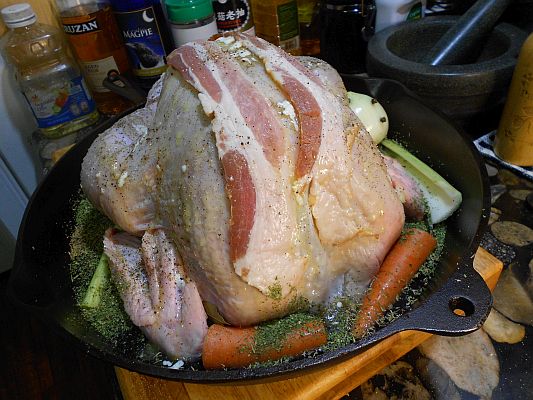 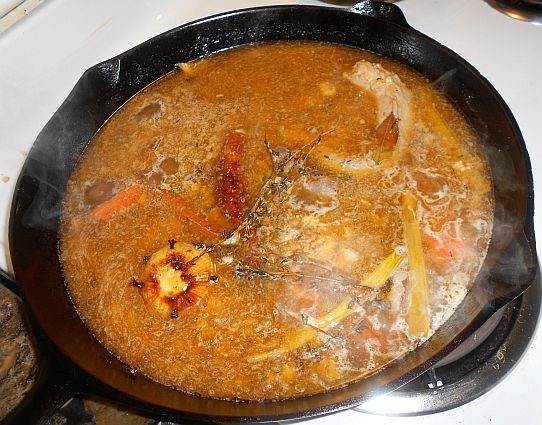 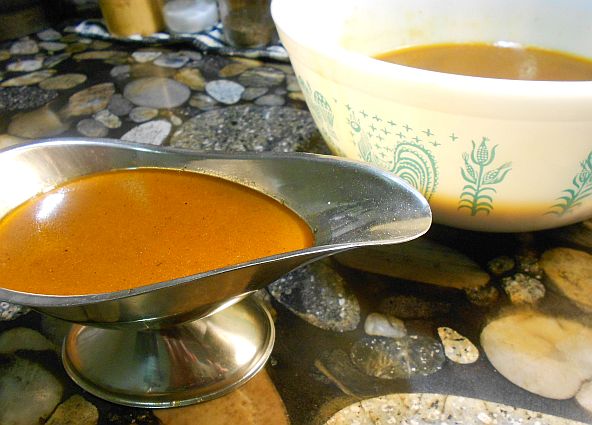 This recipe calls for using the giblets to make a good gravy for the turkey, by simmering the giblets in a sacepan for two hours. Strain the liquid out, then let it settle and the fat will rise to the surface. This fat is what is used in the gravy. After the turkey has been removed from the roasting pan, use a turkey baster to remove the fat from the saucepan and put it into the roasting pan. This will deglaze the pan, and you can use the giblets, the extra liquid, and the entire pan contents – including all of the vegetables – to make the gravy. With medium heat, stir and cook the mixture for five minutes. Strain the gravy from the roasting pan, discard the giblets and vegetables, and move the strained gravy back to the saucepan. Stir the gravy over medium heat until it is thickened and smooth, and ready for serving. 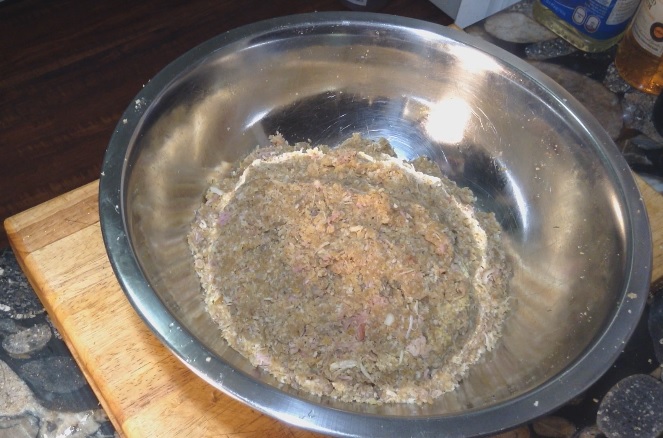 You can certainly use your favorite bread stuffing for this turkey recipe, if you prefer. Mssr. Price himself notes, "The Wayside Inn's stuffing using home-baked bread and homemade sausage has an old-fashioned excellence hard to duplicate with store-bought ingredients." It can take some effort to make homemade sausage (see below) and cooked ham and chicken, just to produce the small amounts necessary for this recipe. If you need to make this stuffing faster, just use canned pre-cooked ham and chicken, and store-bought breakfast sausages.

Heat a large cast iron skillet, ungreased, on medium until hot. Add butter to skillet. Stir until melted. Add chopped onions and celery, and cook over low heat for ten minutes, until the onions are soft and caramelized. Add sausage, diced ham and chicken, and stir fry until the sausage is cooked – because sausage needs to be safely cooked before eating.. Remove this to a large mixing bowl. Add additional ingredients: bread crumbs, eggs, sage, pepper, thyme, mace, marjoram, salt. Mix it all together, and stir in chicken stock to moisten.

Trim the excess fat from the pork shoulder, and grind the pork in a meat grinder. Mix in seasonings. If you're using this as the ingredient in Wayside bread stuffing, simply mix this mixture in with the stuffing. If you want to serve this as a sausage, shape the mixture into patties, and fry or broil slowly for 15 minutes, or until well browned on both sides.