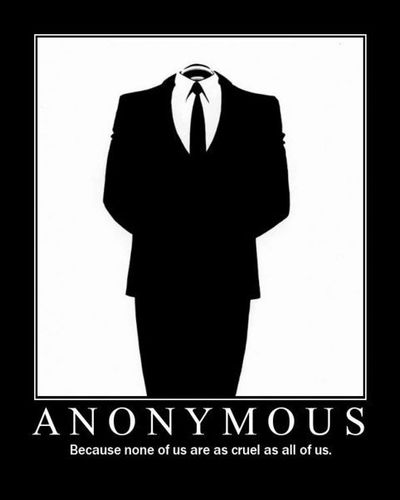 The link above certainly isn't the only site on the Web where you will find ANONYMOUS, but it's done an excellent job of cataloguing all of ANONYMOUS' exploits from an admittedly biased (or /b/iased) point of view. ANONYOUS was born in the festering pits of 4chan and its sister sites, when the strange online community known as /b/ rose to become an enormously popular center of the Web with its ongoing parade of funny and clever pictures, lame running gags and in-jokes, and porn. Most of the time, /b/ has been content to sit there and make fun of anything and everything in sight. But every so often, the masses of /b/ have come together to work towards a common goal. They realized that their numbers made them strong…and thus, ANONYMOUS was born.

ANONYMOUS is actually a running joke among the 4chan crowd, as the kids promote the idea that their combined postings and efforts have created a nebulous, mysterious presence known simply as "Anon." This is why /b/-tards are always asking Anon to provide them with something (usually a missing picture or sound file that they've been looking for). And occasionally, "Anon delivers!" as the missing treasure is found and revealed to the joyous masses of /b/.

Once in a while, something happens that grabs the interest of /b/ – usually something that provides a lot of amusement and EPIC LULZ for the 4chan kiddies. Sometimes, they've decided to stage "raids" on various targets, including Habbo Hotel and Stickam. Working together as a group, they call themselves ANONYMOUS, and give ANONYMOUS the credit for their victories. But occasionally, in the midst of its trolls and pranks and DDOS attacks, ANONYMOUS has worked to do something useful and good.

In 2006, for instance, ANONYMOUS took down the Web site for loud-mouthed racist radio host Hal Turner. After struggling to find someone to counter-attack in order to defend himself against ANONYMOUS' incessant attacks, Turner finally called it quits in the beginning of 2008 (though a couple of weeks later, his show was back with a new format). ANONYMOUS also worked together to track down a child molester and bring him to justice.

In mid-2007, a hilariously awful Fox News broadcast tried to warn the public about the danger posed by ANONYMOUS. You can watch this embarassing performance here, in which they describe the legions of /b/-tards as "hackers on steroids:"

Project Chanology: the war against Scientology

In early 2008, the release of an unauthorized biography of actor Tom Cruise (and the subsequent efforts by Scientology to crush the book) caught ANONYMOUS' attention…and its legions banded together to take action against Scientology. In the early days of its attacks, ANONYMOUS successfully took down a number of official Scientology Web sites (though most of them were back online after a couple of days). The best part of this new "attack" against Scientology wasn't the actual affect it had on the Sons of Elron, but the entertainment it provided for /b/ and any other onlookers.

Check out this eerie, campy, but effective video of ANONYMOUS' declaration of war against Scientology:

Encyclopedia Dramatica is chronicling the major events of the battle:

As for why the battle against Scientology began in the first place, an archived 4chan message thread suggests that it was started out of sheer boredom more than anything else. Supposedly the exposure of the Sons of Elron's "latest propaganda video" (i.e. the promotional video starring Tom Cruise) was the catalyst that started this; and it's possible that the person who began that message thread had it in mind when he suggest that /b/ do "something BIG." But it was the idea itself of attacking something as big as Scientology that caught on with the chansters, and the call to arms against one of the biggest and most blatantly stupid religious cults spread like wildfire across the chan boards, Encyclopedia Dramatica, Ebaum's World, and all of ANONYMOUS' hangouts – literally overnight. The attacks against the various Scientology domains began almost immediately, and they caught everyone off guard…while giving the bored masses of ANONYMOUS something new to do.

The tactics being used against Scientology have been resoundly denounced and rejected by the organization's long-time online foes – for examples of this, you can read this official statement rejecting ANONYMOUS at Operation Clambake, and an open letter to ANONYMOUS by my friend Jeff Jacobsen. But the participants in the long-term battle against Scientology online haven't realized yet that these l33t h@x0rz aren't attacking Scientology to bring it down (even though this is ANONYMOUS' stated goal)…rather, they're doing it for the entertainment. As long as interesting things keep happening and providing /b/ with entertainment, then the attacks against Scientology are likely to continue.

Still, I don't expect this to have much of an effect in the long run. Scientology has two advantages over /b/ – its legendary legal attack dogs, and patience. What will probably happen is that they will track down and sue a few of the masterminds behind the DDOS attacks, and the short attention span of /b/ will cause the attacks to quiet down and go away after a few weeks or months…but a number of determined /b/-tards will carry on the battle for years. ANONYMOUS will be popping up for a long time to come, and providing us with some interesting EPIC LULZ.

Meanwhile, the organization of Scientology has been driven into a panic by ANONYMOUS' actions…so much so, they put together their own propaganda video and made it available online for free downloading at www.anonymous-exposed.org/. Even more interesting is the way the organization has taken the time to track down several members of ANONYMOUS and expose their identities, send threatening legal notices, and even try to have some of them arrested on "harassment" charges. All this is merely fueling the fire, and ANONYMOUS has pledged to continue exposing Scientology with public protests through 2008 and into 2009.