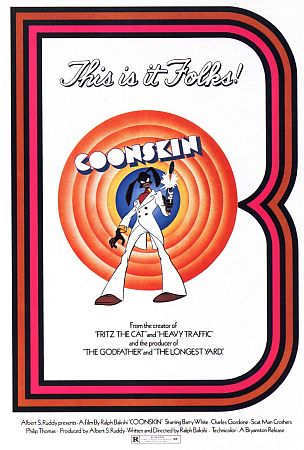 Racial satire has been one of the most explosive and emotional storytelling subjects of all time, which is why we stare in amazement when a cartoon like The Boondocks gets in our face and pokes fun at black culture in a way that would get it banned if it played anywhere near prime time on the Not-So-Big-Anymore Three networks. But a full three decades before The Boondocks, in the midst of the blaxploitation craze of the seventies, Ralph Bakshi churned out a piece of vicious black satire that offended both white and black audiences. Even the title of this movie, Coonskin, was so offensive that when it finally made its way onto video, it was renamed Street Fight and buried deep within video-distribution catalogs so that it would never see the light of day.

If you only know Bakshi from his animated films Lord of the Rings, Wizards, or even excrement like Cool World, then you won't be prepared for the hardcore filth that hits you with Coonskin. Far more outrageous than his animated adaptation of Fritz the Cat, Coonskin was Bakshi's homage to black culture of the sixties and seventies, thrown together with sly takes on Song of the South and even a subtle homage to Bugs Bunny. Even the actors who voice the main characters are well-known names from black pop culture – Scatman Crothers, Barry White, and Philip Michael Thomas (Tubbs from Miami Vice). As a satire of the black society of the day, Coonskin is merciless, and even though it falls apart at the ending (and doesn't really end), the first half of the movie is one of those rare moments in film that makes you gasp in shock, even as you're laughing from the sheer outrageousness of it all.

The movie starts with that most clichéd of roles, the prison break. Three down-on-their-luck folks are preparing bust out of the joint, and they're waiting for their contact person to drive by so they can jump into his car and make their escape…when they happen to come across a fellow inmate, an old geezer, who relates an old folk tale to them about Brother Rabbit (Br'er Rabbit), a wise-ass, up-and-coming rabbit who, along with his buddies Brother Bear and Preacher Fox, made a name for themselves in the black world. The animated characters appear in a spotlight that looks suspiciously like the famous Warner Bros. cartoon logo, and the character of Brother Rabbit is a brash, confident trouble-maker who's always in control and always running rings around his enemies – not unlike Eddie Murphy in his early movie career, or like a certain other cartoon rabbit.

Brother Rabbit is a small-time hood trying to get by in the racist South, but he gets into trouble with the white sherriff and has to flee with his companions to the big city…where he finds the black community in a shambles, squabbling with itself and unable to rise up to reach its full potential. So he puts his own plan into motion, working with the local gangs to clean up the streets and bring the neighborhood together – and kicking out the white man in the process.

This movie was made before Bakshi got into his rotoscoping fetish: all of the characters are hand-drawn in the traditional fashion, and this is where Bakshi excelled. Much of the animation had live-action backgrounds, but we don't really care about that: the characters are so exaggerated and ridiculous (both the black and white people), we know they're just cartoon caricatures. (It's a little surprising, in fact, when an animated police officer sits back in a bar and watches a live-action stripper in action.) Every so often, Bakshi interjects a satirical moment featuring an unnamed black guy being oppressed (and literally beaten up) by the United States of America; but it's funny and accurate enough that we don't mind it.

The scenes we see in this movie are like a checklist of blaxploitation – inbred, redneck, racist cops who beat their graft payments out of the local black populace; a "revolutionary" religious leader who preaches violent up rising against the white man; drug dealers who are turning the streets of Harlem (of course the story takes place in Harlem) into a war zone; and a grotesque, disgusting Mafia godfather who seems like a bloated parody of Don Corleone. Unfortunately, the whole Mafia subplot is something of a failure: the movie suddenly spends it's entire second half focusing on the the comings and goings of the Don, his battles with his wife, and the death of his gay son (who's a flaming queer, of course). Brother Rabbit is suddenly pushed into the background until the climax of the movie – which ends suddenly and abruptly, as if Bakshi couldn't figure out how to wrap it all up.

The movie is an offensive, vulgar romp for its first half until the appearance of the Mafia; after this point, I personally get the urge to turn the movie off and end it right there. But the first half is wildly vulgar, exposing the faults of black society as much as it attacks whites; it's an equal opportunity offender. This is what makes Coonskin such an angry, memorable kick in the crotch, and one of Ralph Bakshi's finest achievements.

Coonskin was so offensive that even black activist groups protested the movie, missing the point entirely and causing it to die at the box office. This is one of those movies you have to see at least once, just for the experience of seeing a rare moment of bulldada that has rarely been equaled – at least by its ability to offend, if nothing else.