Over the course of its history, Birmingham Stove & Range produced a number of cast iron pans especially for baking cornbread. (Of course, these items can be used to bake dishes other than cornbread!) Several of these items were unique and became very popular, to the point where other companies produced their own imitations. Sadly, Atlanta Stove Works has been largely forgotten in the years since the company folded. But its cast iron legacy continues to live in on many products seen today, including the popular corn bread pans seen around the world.

Birmingham Stove & Range produced many cast iron corn stick baking pans. Like their skillets, these pans did not have the manufacturer name, only a size number and mold identifier. Fortunately, as with their skillets, BS&R cornstick pans have a unique handle design that make them easy to spot. The handle is rectangular shaped, with an indentation; this is different from all other vintage corn stick pans. Also, note that the corn rows are set in opposite directions, instead of all in one direction. As with their saucepans (see also: Saucepans by Birmingham Stove and Range), a rough estimate of the age of a BS&R cornstick pan can be determined by the size and lettering of the description mark. The Red Mountain series had larger lettering, while the Century Cookware corn stick pans had smaller lettering.

The Corn Stick pans were produced in four different sizes during the Red Mountain series' production history, lasting through the 1960s. This product line was then reduced to only one size (7S) for the Century Cookware series, and continued to be produced at this size from the 1950s until the mid-1960s. At a point during the 1960s, the size of the 7S Cornstick Pan was changed, and it was made slightly smaller. Researchers on Facebook group suspect this would coincide with the introduction of DISA automated production equipment at BS&R's foundry, during the years 1966 through 1968. These smaller corn stick pans were produced from the 1960s all the way through the 1980s. 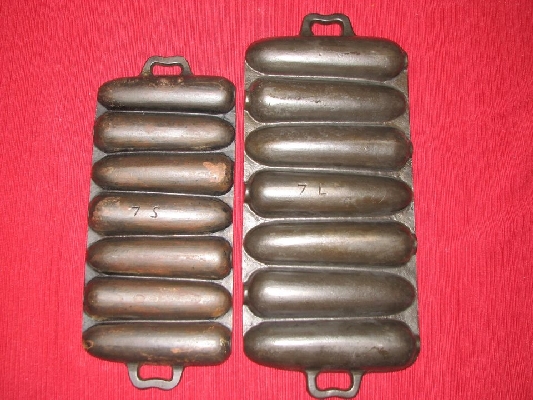 Shown here is one of the Red Mountain pans marked 7 L, of a larger size than the standard corn stick pan. This pan had the same number of corn sticks (seven), but it was physically larger in size than the 7S pan. The story of the cornbread skillet, according to retired Birmingham Stove & Range President Saunders Jones, went: "Billy Washburn was the guy in charge of the production line [Foundry Foreman], and his wife wanted that cornbread skillet for a long time but no one ever listened. Finally, one day they decided to indulge him and the thing took off! They couldn't make enough of them!" Mrs. Washburn wanted a "cornbread skillet" that would cook cornbread with a crust on all sides of each piece, so her husband used his position as one of the Foundry's Foremen and made a handmade pattern. He experimented with it in 1967, and it became their best seller.

The cornbread skillet was initially produced with a PAT. PENDING ("patent pending") mark, and not a MADE IN USA mark. This was done in an attempt to prevent other companies from producing their own imitation versions of this pan; though the attempt was unsuccessful. 1967 to 1968 were record-setting years for BS&R, largely due to the sales of this skillet. The popularity of the cornbread skillet soon enticed rival Lodge Manufacturing to produce their own sectioned "wedge pan" in imitation of the cornbread skillet, which was introduced "only three to four months" (Saunders) after BS&R began producing the cornbread skillet. The Lodge skillet had a hole in the middle, which made it lighter than the BS&R pan. When BS&R saw their skillet being imitated, they removed the PAT. PENDING mark and replaced it with the standard MADE IN USA mark, in the early 1970s. See also on YouTube: How to Use a Cast Iron Cornbread Pan When the corn bread skillet was introduced in 1967, a smaller companion pan was also produced. This smaller sized pan had only six wedges instead of eight. All of these six-wedge pans had a PAT. PENDING mark on the back. Production of this pan was discontinued in the early 1970s, likely around the same time the PAT. PENDING mark was removed from the full sized cornbread skillet and replaced with MADE IN USA. No six-wedge corn bread skillets have been discovered with a MADE IN USA mark rather than PAT. PENDING.

The original label produced with the first series of corn bread skillets.. Click on the picture for a larger image of the label. 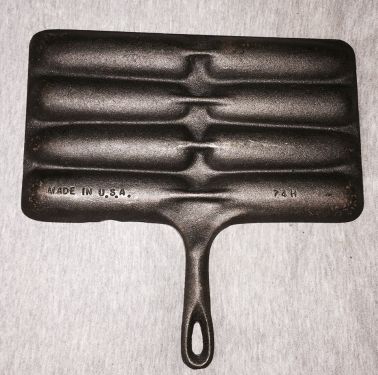 Photos by Kristina Dickey. Click each image for a larger photo.

One of the last items developed by Birmingham Stove & Range made its debut in the late 1980s. Production only lasted a few years before BS&R ceased operations, and because of this the Handy Dan Cornstick Pan is a rare item in spite of its relatively young age. (Young for cast iron cookware, that is!) Collectors and users who own one of these say the addition of a handle makes this pan far easier to use than a standard corn stick pan. The "Handy Dan" cornstick pan already commands a high price among antique dealers due to its rarity.

The Handy Dan pan had a mold number of 74H. As with the Jumbo Skillet, which was mold number 75H, only one mold was needed because only a small number of these pans were produced.

Here is a copy of an ad used to promote the Handy Dan Cornstick Pan. In 1992, clothing retailer Eddie Bauer offered a unique cast iron pan in its stores. This pan was only available for a brief period of time, as it was never produced after 1992. Social media PR persons at Lodge Cast Iron have confirmed Lodge produced this pan for Eddie Bauer. Click on the picture for a larger image.