Wait until you hear the screams from your dinner guests when you present…THIS. 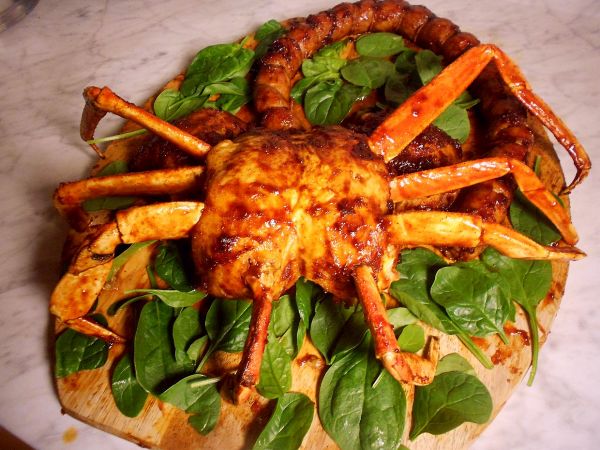 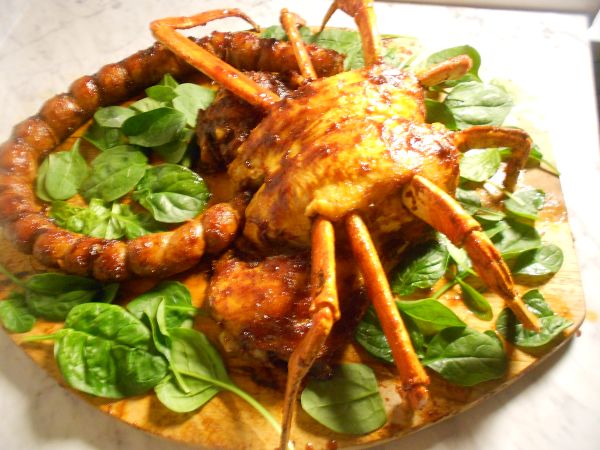 The basis of this recipe is from the Eat the Dead Web site, and I'm more than happy to promote and link to these guys. The original recipe on their Web site can be seen here: eatthedead.com/halloween-recipe-the-facehugger-feast-roasted-chicken/ A photo from that Web site was shared all over Facebook durint the summer of 2019, and it was the same for everyone: they all said, "I've got to make this!" but of course they never did. As it turned out, this was actually very easy to make, as it uses a roast chicken, a roll of sausage, and some crab legs. 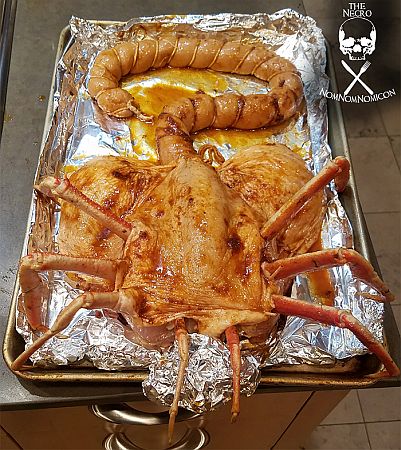 However, we're modifying the recipe a little bit, to make it easier to make and also to ensure it's thoroughly cooked. The original Web site shows photos of the entire alien being assembled before it was cooked. While this makes for great pictures, the actual cooked alien (chicken) had a little difficulty. The author of the Eat The Dead site wrote this addendum on the Web page: "I’m going to be completely honest with you and tell you that the first time I made this dish, I jammed the legs in before cooking the chicken (hence all these photos). This ruined the crab legs. If you decide to do it this way, know ahead of time that we’re cooking this beast at a temperature that will dry your crab legs out and make them taste awful. Trust me, you will NOT want to eat them…so I strongly suggest either getting the cheapest legs you can find that you don’t mind ruining, or stick them in at the end." Because of this, we're preparing each part separately, then assembling the final alien after each part has been cooked.

Pans needed: 2 12-inch cast iron skillets, one to roast the chicken and one to roast the sausage. If you don't have two cast iron skillets, get them! Or use a 9 x 13 inch roasting pan for the sausages. The chicken and the sausage must be cooked separately, because they have different cooking times. Also, a 10-inch cast iron skillet plus a long sheet of aluminum foil, to braise the crab legs. Two medium sized mixing bowls or dishes to prepare the barbecue sauce and the spice rub. A length of string or twine, safe for use with food, to wrap around the sausage. And a large serving platter to prepare the cooked alien. 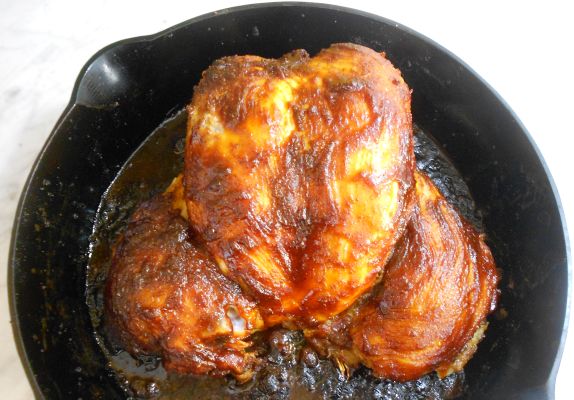 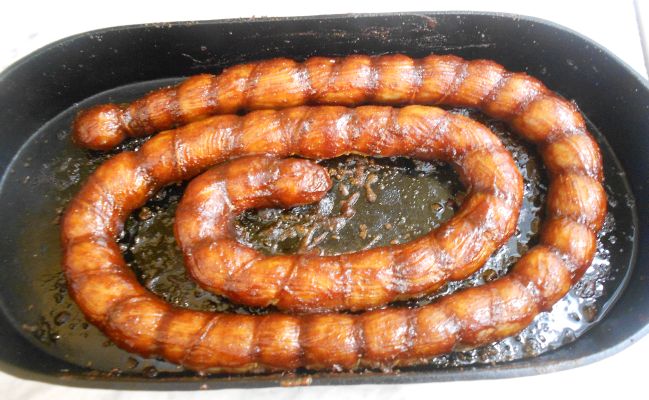 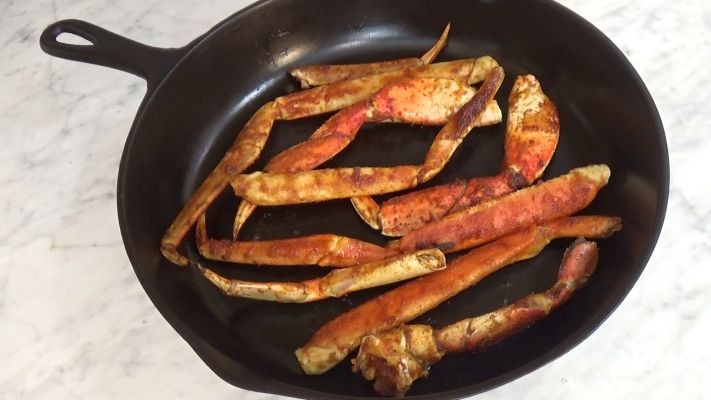 Begin preparations 12 to 24 hours in advance, in order to brine the chicken in your refrigerator.

The best roast chicken always starts by brining it in advance. I like using a buttermilk brine, because if it's good enough for fried chicken, it's certainly good enough for roast chicken. This simply requires placing the chicken in a large bowl or a gallon-sized storage bag. Mix 2 tablespoons vinegar into 2 quarts of whole milk, then add it to the bowl so the chicken is almost entirely covered. Cover the bowl with plastic wrap, and place it into the refrigerator. Let the chicken brine in the refrigerator overnight. 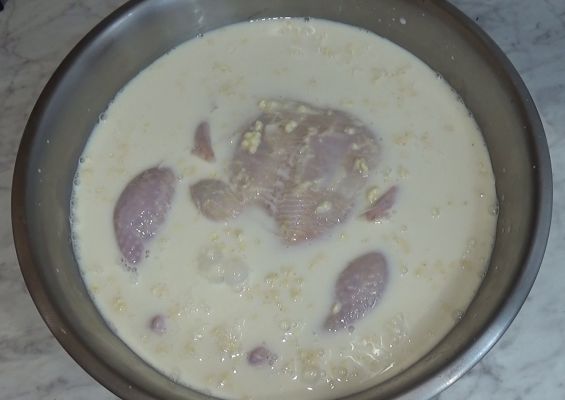 The next day, prepare the barbecue sauce and the chicken spice rub. The original recipe says to use a ghost pepper honey glaze, but there's nothing wrong with using good old barbecue sauce on the chicken. You can certainly use store bought barbecue sauce, but I like making my barbecue sauce from scratch, because it's easy to make and so much better than store bought sauce. This way you get to add your favorite spices to the sauce, such as lots of smoked paprika.

Preheat the oven to 350 degrees Fahrenheit. Remove the chicken from the brine, and rinse off the brine, Now we're ready to butterfly the chicken – a process that's also known as spatchcocking the chicken. This simply means we completely remove the spine of the chicken, cutting on both sides with kitchen shears. Place the chicken into a large cutting board, and fold it open so the uncut breast side is on top, while the inside is face down on top of the surface of the pan. This will open up the chicken, so it will roast faster and more thoroughly. With heavy cooking shears or scissors, remove the wings and cut off the drumsticks. Don't remove the thighs! Leave the thighs attached the chicken. This way it will resemble the body of the alien facehugger.

When you think about what the face hugger really does to its victim, "spatchcock" is actually a very appropriate word to use... 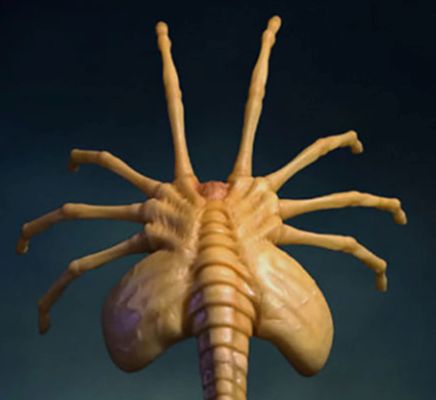 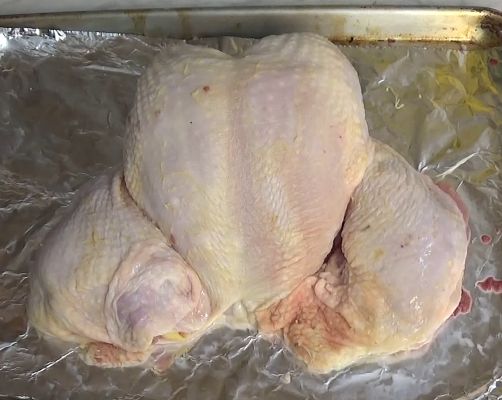 The next step is to prepare the tail. The original recipe says to stuff your own sausage, but not everyone can do this, and there's really no reason not to simply use store bought sausage. Wrap twine around the sausage so that it looks like the segmented tail of the alien. I was afraid it would be difficult to wrap the twine around the entire length of sausage, but it was actually very easy to do.

And now we get to take out our trusty cast iron. Place the chicken into a 12 inch cast iron skillet, and cover it with the rub. Take a second pan, and lay out the sausage. Once again, cover it with the rub, so the tail and the body will be the same color. Insert a probe thermometer into the breast of the chicken to track the temperature, and place the pans with the chicken and sausage into the oven. The tail goes on the top shelf, and the body goes on the middle shelf. Roasting the chicken and sausage until the temperature reaches 120 degrees Fahrenheit. Because the chicken has been spatchcocked, this should take about 40 to 50 minutes.

Raise the oven temperature from 350 to 450 degrees Fahrenheit.

Baking crab legs is very easy and fast: wrap them in foil, and cover them with more of the rub. Then, brush the legs with the barbecue sauce. Cover the legs completely with foil, and cook them for ten minutes at 450 degrees. And now our alien legs are ready! Open the foil and take the legs out, placing them on a plate to dry them off.

At last, we get to assemble the alien! All we do is insert the tail into the lower part of the chicken, and arrange it on the platter. use a knife and cut holes in the body of the chicken. Then we jam the crab legs in, so they stand up on their own. Adding the legs really brought this sculpture to life! Before we added the legs, this looked like a roast chicken. Once we added the legs, this creature took on a life of its own. From here, we gave it a final coating of barbecue sauce to make it look wet and slimy.

And with that, we've successfully created an alien face hugger. 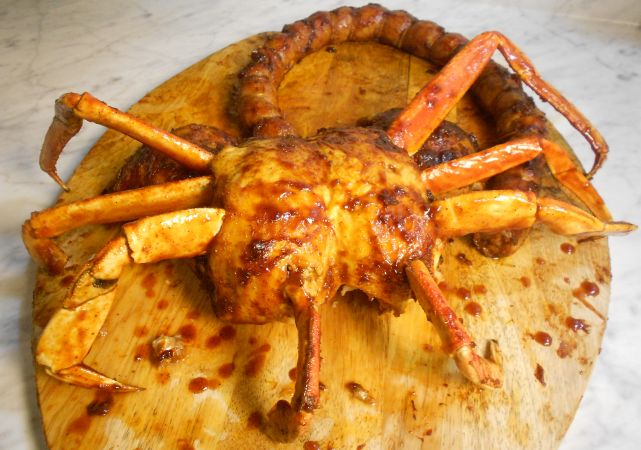 The final step was to add some green foliage to give some color to his environment, and to provide a natural setting to hunt for his next victim. And now, at last, our alien face hugger is ready to serve. 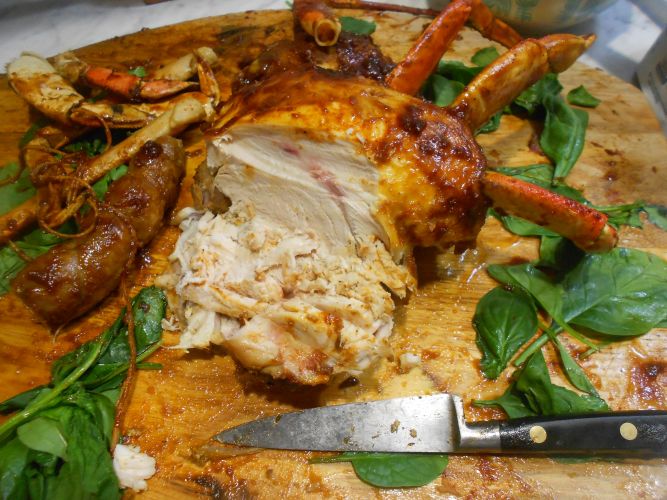