Along with lobstah and clam chowdah, Boston baked beans are as traditional a New England dish as you can get. The Boston tradition stems from the Puritans, who would prepare these beans a day in advance, bury the beanpot in the ground with hot coals, and let the beans cook overnight so that they would be ready when the long Sunday hours of church were finished.

I cobbled this recipe together for the 2012 Super Bowl, when the New England Patriots battled the New York Giants once again. Since then I've been adjusting it as necessary, and the result is a dish I'm quite proud to call my own. Most recipes for baked beans call for prodigious amounts of ketchup and Worcestershire sauce with the ingredients; and while I love Worcestershire sauce, this dish does not require either of them.

As a born and bred New Englander, of course I've eaten the world famous baked beans in Durgin Park restaurant at Faneuil Hall, Boston. Faneuil Hall has been at the center of Boston's food markets since the Colonial days, and it has changed with the times as the years have gone by. Today it's a big food mall, full of many independent food shops (and several franchises) that serve any kind of fast food you could ever want, with better quality than you would find in a typical mall food court. Durgin Park has always been a part of this; and while it does have some superb dishes (I love the key lime pie), I find its Boston baked beans to be overrated. The additional background flavoring of the pork just isn't there, though a newcomer to Boston may not recognize this. If you've never had homemade baked beans, then Durgin Park's beans are likely to taste wonderful. But if you know how to cook your own beans…Durgin Park seems weak in comparison. Does this mean I'm declaring my baked bean recipe as better than Durgin Park? Judge for yourself.

Pans needed: Heavy lidded pot for slow cooking, such as a beanpot or a cast iron dutch oven; plus a small saucepan to prepare the spices. (This recipe will work wonderfully in a crock pot.)

The traditional method for preparing Boston baked beans requires a lot of time: the beans need to be soaked overnight, and when they've been prepared they will need to be baked in a 250 degree (Fahrenheit) oven for six to eight hours.

Use a Salt Brine

The traditional method of soaking beans is to simply cover them with water and soak them overnight. This easy method usually works well, but there are times when the beans don't soften – especially if you're in an area where the local tap water is "hard" mineral-rich water. This is why I recommend soaking the beans in salt water. There's a popular belief that salt water will harden the beans, but foodie blogs and YouTube videos have demonstrated this to be incorrect: the salt water breaks down the hard shell of the beans and softens them, so that after the beans are cooked they'll be soft and chewy, with the right consistency – but not mash.

For each pound of beans, add one quart of cool-to-warm tap water; it doesn't need to be ice water, but it can't be hot water. (Hot water would begin cooking the beans prematurely.) To the water, add two teaspoons of table salt for each quart of water. Mix it all together for a few seconds to evenly distribute the beans and the dissolve the salt. Cover the bowl with plastic wrap, and set it on your counter to soak for twelve hours.

Don't put the beans in the refrigerator; the cold air in the fridge keeps the beans from softening. If the beans soak too long, they spoil and smell terrible; which is why a 12-hour soak works just about right. (If you're worried about them contracting bacteria when soaking on the countertop, the 10 to 12 hour cook in the oven at 250 or 260 degrees will take care of that.) The beans will expand as they soak, which is why the additional water is needed. After soaking the beans, drain the bowl with a colander and discard the salt water. The amount of salt used here is low enough that you won't have to rinse off the beans after draining them; but the bean water itself will be too salty.

Arrange the beans in a cast iron dutch oven of 4 to 5 quart size. Spread a layer of beans across the bottom of the pot, then lay the pork and onions on top. Cover the pork entirely with the remaining beans.

Cover your dutch oven with a heavy iron lid. Bake for at least 8 to 10 hours in the preheated oven, until the beans are tender. If you are adding franks (hot dogs) to the dish, wait until about five hours have elapsed. Cut the franks into small pieces, about one half inch wide. Add these to the pot and stir it all together. Cover the pot, place it back in the oven, and wait for another three to four hours.

Cooking longer than 8 hours is fine; I've often prepared these beans at 5:00 or 6:00 PM in the evening, and cooked them in the oven until 5:00 AM the next morning in order to take them in to work. The important part is making sure the beans don't dry out and become hard! With practice, I've found a time of between eight and ten hours seems to produce the best results for thoroughly cooked beans. (So far, my record for cooking beans is 31 hours: I started them at 9:00 AM on a Saturday morning and served them the next day at 4:00 PM.)

I grew up eating B&M baked beans, and it was always a pleasure to discover the hunk of greasy pork fat they put in each can of their beans. This is why I prefer to use salt pork or slab bacon: while it has the same taste as bacon when baked in this recipe, the consistency is different. You get the same big hunks of soft pork that you would find in canned beans.

A traditional side dish to serve with Boston baked beans is steamed Boston Brown Bread. Outside the New England area, you may be able to find this in the section of your supermarket that sells canned baked beans. B&M, the maker of one of the more popular brands of canned baked beans, also makes brown bread and packages it in cans, where it is sold next to the baked beans. Not many people are familiar with this, though; if you look on YouTube, you'll only see a couple of videos from people who are curious (and scared) about the idea of "bread in a can." 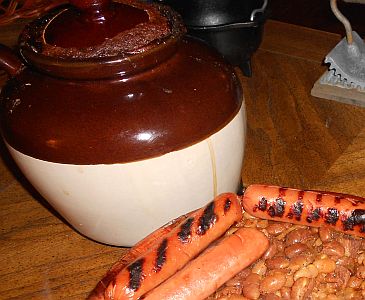 You may be fortunate enough to own a genuine ceramic beanpot for cooking your beans. This recipe was originally developed for use with a beanpot; that's why it calls for the flavorings to be heated in a separate saucepan, then poured over the beans. However, care should be taken not to damage the ceramic pot itself. Don't preheat your oven; wait until you put the pot of beans into the oven before you turn it on. Likewise, do not heat up the oven to any temperature higher than 450 degrees F to cook with the ceramic pot.

Beans can be kept warm in the beanpot with the lid on for several hours.

You may find yourself in a situation where you need to make Boston baked beans with somewhat less preparation time. A couple of steps can be taken to reduce the entire preparation time to between three and five hours from dried beans to fully ready baked beans.

Instead of soaking the beans overnight, place the beans in your dutch oven and add enough water to cover the beans, plus at least an inch of extra water. Add one tablespoon of baking soda. Heat the pot and bring the beans and water to a boil, then reduce your heat to about medium and vigorously simmer the beans for 20 to 30 minutes. This will produce a lot of foam, and your pot might boil over if you don't have enough extra space! You may have to watch the beans and repeatedly lower the heat, then raise it again as the level of foam decreases.

Prepare your ingredients in the dutch oven as listed above. The baking soda boil greatly reduces the amount of bean water produced when the colander is drained, and you will need to have additional water or broth available to add to the dutch oven.

To reduce the baking time, preheat the oven to 325 degrees F instead of 250. This will let you cook the beans for three to four hours instead of six to eight hours. 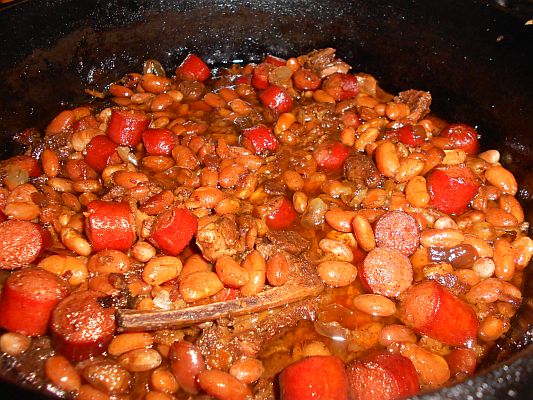 Bacon or salt pork is a traditional ingredient used for making Boston baked beans. In addition, this recipe includes the option of adding additional meat to the dish. This produces the classic combination of franks-and-beans, which are as close to New England as the Boston Red Sox. 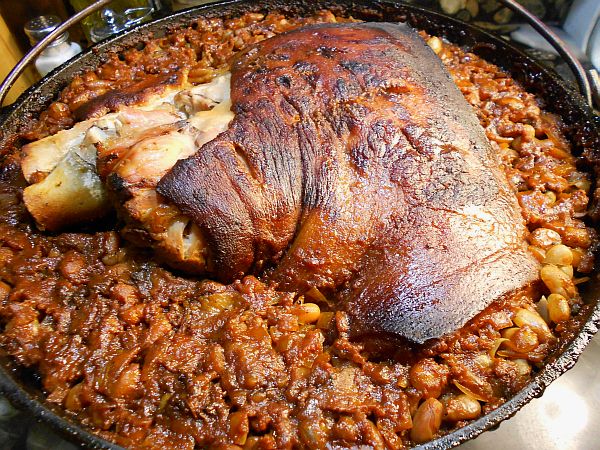 This recipe for Boston baked beans will produce a wonderful pot of beans, with an additional flavor. However, if you really want to kick it up a notch and feed your guests a luncheon they won't forget, use this recipe with a whole pork shoulder. Cook the pork shoulder together with the beans, and you'll have a wonderful dish of pulled pork with a unique Boston flavor – along with Boston baked beans as a side dish! 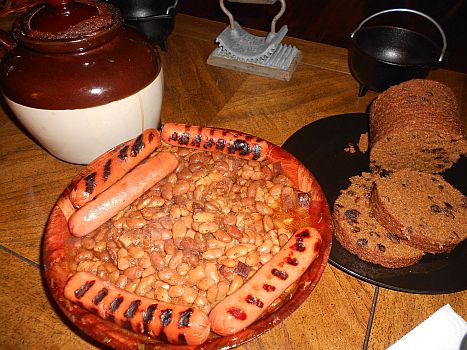 , Boston Baked Beans, and Boston Brown Bread. The dishes all succeeded wonderfully! At an antique store in New Bedford, I found something that caught me by surprise: a genuine Boston ceramic beanpot. There's no manufacturer logo on it, but it's stamped USA on the bottom. As a born-and-bred New Englander, I knew I had to get this. And so on my last day on the pager before vacation, I spent the day slow-cooking a traditional New England meal of the kind enjoyed for generations. The beans are absolutely delicious, so much so that I changed the main meat ingredient in the baked beans recipe from "salt pork" to "slab bacon." (Regular strip bacon will also work fine.) I did overfill the pot, to the point where I had to drain some of the liquid off; but this in no way prevented the beans from being thoroughly cooked, soft, and brimming with that baked bean flavor. And they're not too salty. Boston Brown Bread, meanwhile, has been largely forgotten by most of the world, even here in New England. This bread isn't baked but rather steamed – it's steamed molasses bread in a can. I prepared it in that manner, using a 28-ounce tomato sauce can and a steaming basket in my 6-1/2 quart enameled cast iron pot. I ended up steaming the bread for about an hour and fifteen minutes. The batter had filled the can about two-thirds full, and it expanded to fill the can completely. After letting the can sit for ten minutes, I shook it gently out of the can and onto the plate. As you can see, it held together and did not fall apart, nor was it undercooked. This is not a "sweet" bread, but the molasses and raisins give it a lovely taste all its own. And I can see why it all goes together with the baked beans. I am very happy with the results of today's cooking. I think it's the best meal I've put together in a while.