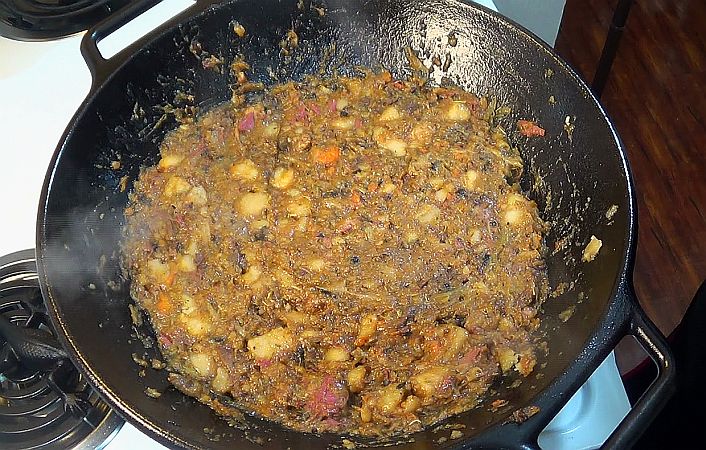 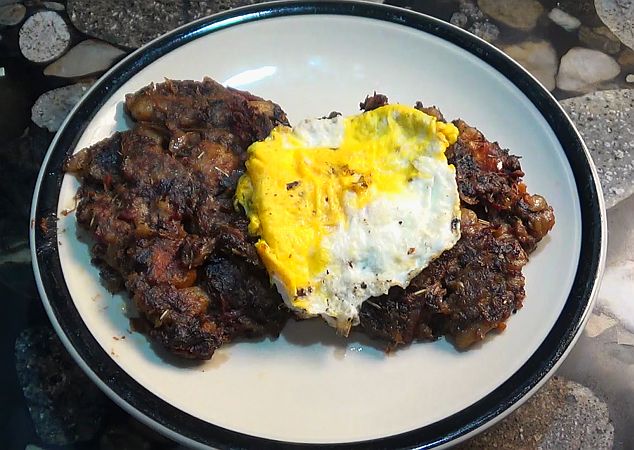 It's the day after St. Patrick's Day, and we all know what that means. It means, there's a big container in the refrigerator full of leftovers. Chances are, the corned beef is gone, or almost gone, but there are still a ton of vegetables that are now a bog cold lump of mash. Which means they'll probably be thrown out. Or, we can take a lesson from the folks in Great Britain, and take these leftovers, and make a dish with a delightful name and some less than delightful ingredients. And that, of course, would be bubble and squeak. But whether you call this corned beef hash or bubble and squeak, it's absolutely necessary to make this in a cast iron pan.

In England, bubble and squeak has traditionally been served on Mondays, because this would be when the leftovers from the Sunday roast (with boiled vegetables) would be refried and used. "Bubble and squeak" is supposed to be named after the sound these leftovers make when you fry them in a cast iron pan. Personally, I think an additional reason is because that name is more likely to make kids want to eat leftovers. And some folks say it's actually the sound you make, after you eat this stuff. Even if that's the case, a well-made leftover hash can be as good as the original dish, and even Alton Brown says, "It's almost worth making corned beef and cabbage just for the leftovers."

Pans needed: Large cast iron skillet, dutch oven or work – with a lid. A lid is very useful for helping to bring the temperature of the food up after cold and soggy vegetables are added to a hot frying pan.

Heat the cast iron pan on medium heat for 10 minutes, without adding oil at this time. Chop up the onions and sausages.

Add a little cooking oil to the pan, and fry the onions and sausage until they are cooked. Add the leftovers to the pan and start stirring away. Add in the leftover corned beef, and stir everything around. Press down with your spatula to mash it all together, and this is very easy because the vegetables are already cooked. A few minutes of stirring and mashing is all we need to give it the right consistency. All of that cold and soggy food lowers the temperature of the pan, so when after the food is mashed, cover the pan for a few minutes to bring the temperature back up.

After five minutes, uncover the pan, and stir fry the hash for about ten to fifteen minutes, to make it good and hot, both inside and outside. The good about this dish is, you can add whatever spices and extra ingredients you like best. Here we're using salt, pepper, some smoked paprika, and some parsley, sage, rosemary and thyme, but you can add Worcestershire sauce or hot sauce or anything you like to this. After about fifteen minutes, we've gotten our hash good and hot, both inside and out, so it's time to remove it from the pan, and move on to step two.

Rather than trying to fry that huge lump of hash, fry it in batches, a little at a time. This will to sear the vegetables and make those delicious crispy bits of brown stuff that everyone wants, and you can never have enough of. Doing this in batches, a little at a time, will make it all well-done and brown much more than trying to fry that big lump of hash. Brown each batch of hash as much as possible, and stir it around as we sear it so the yummy, tasty crispy bits are all throughout the hash, inside and out. These batches make for good individual servings of hash.

After the servings of hash are prepared, fry an egg and top the hash with the fried egg. The result is a corned beef hash for breakfast that's every bit as delicious than what they serve at the finest restaurants.