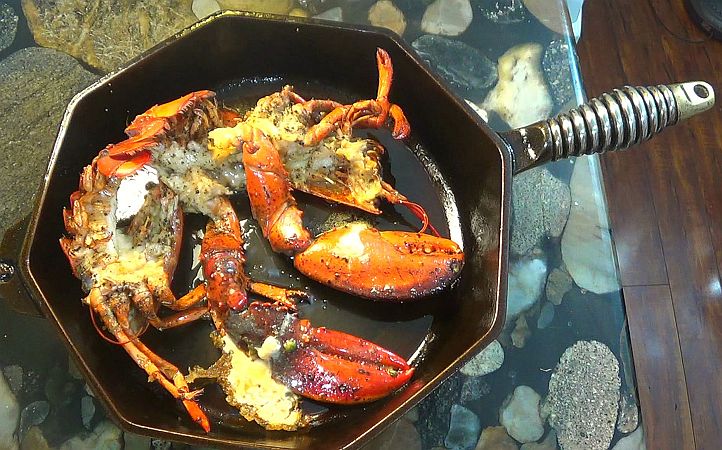 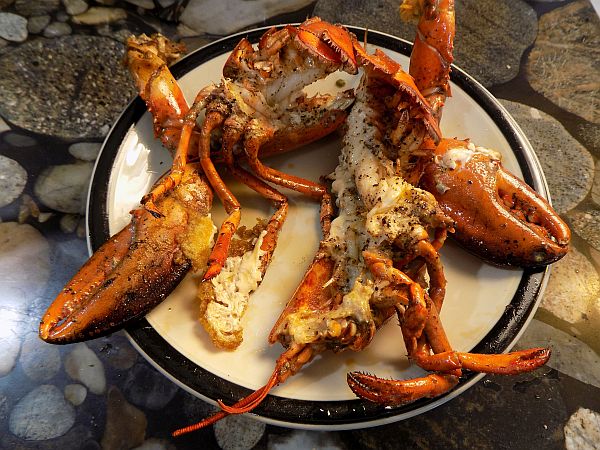 A cutting board and a large, sharp knife will be needed for killing the lobster.

Place the lobster (or the container with the lobster) into the freezer for 15 to 30 minutes. This will numb the lobster and make it easier to kill (or "dispatch").

Place a second, smaller skillet onto the stovetop, and heat this pan on low heat. This pan will be for preparing the white wine cream sauce. Chop up some fresh parsley, for use in the cream sauce. 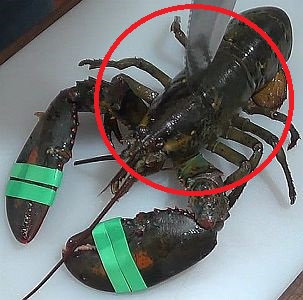 Immediately before you are ready to treat the lobster, add about 1/3 cup of white wine to the smaller skillet. The wine will simmer and reduce as the lobster is prepared.

Take the lobster from the freezer, and place it onto a large cutting board. Killing the lobster will release a lot of liquid, so be ready for this.

It's a simple fact that the lobster has to be killed (some folks say "dispatched" to lessen the emotional impact) immediately before being prepared for cooking. The fastest and cleanest way to do this involves using a large knife to quickly split the brain and spine apart, thus killing the lobster in about one second.

On the top of the lobster's shell, just behind the head, there is a natural "cross" where the crease of the shell intersects the base of the head. The tip of the knife is placed at this point. (A large and heavy knife works best here – and, of course, it must be sharp.) The user then thrusts the knife down, hard and fast, and pulls forward to quickly split the head apart. When done correctly, this takes about one to two seconds.

The claws, legs, and tail will continue to move after this point. These are entirely muscle contractions, especially after the brain has been removed.

Using a large knife or cleaver, split the lobster completely into two halves. Remove the intestines, which are stringy bits attached to the base of the tail and run along the edge of the shell. Remove the stomach and all other guts. Essentially, the lobster is cleaned and anything colored green, or blue, is removed and discarded.

Remove the claws by twisting their legs and pulling them off. Use the knife, or other large object, to crack each claw. Don't completely break open the claw; simply crack it, to allow the claw meat to properly cook.

Use a pepper grinder and spread cracked black pepper onto the lobster.

Add canola oil to the hot cast iron pan, and it should begin smoking immediately. Place the lobster pieces into the pan, shell side down, so the shell is contacting the hot surface of the pan. This will cook the meat without burning it. You only need to cook the lobster in this manner for about one minute.

After one minute, add 1/4 to 1/2 cup of brandy to the hot pan. Light the brandy with a lighter or torch, and flambee the lobster. The flame will die down in less than a minute.

At this point, take the hot pan and place into the oven. Roast at 450 degrees Fahrenheit for five minutes.

During this time, raise the temperature of the stovetop burner with the white wine, to about medium. Add 1/3 cup cream to the pan with the white wine. Stir in parsley, and keep stirring until the lobster is ready to come out of the oven.

Remove the lobster from the oven. Immediately transfer the lobster pieces to a plate, to keep them from overcooking.

You can add the cream sauce before or after serving.