A fully roasted turkey in half the time

I compiled this recipe in early November of 2012, in preparation for Thanksgiving, and have been updating and tweaking it over the past few years. Like every aspiring cook, I wanted a "perfect" turkey on my table: one with moist, juicy meat and crisp brown skin. I looked at a lot of different recipes for roast turkey and considered many different methods, from the original roast turkey (325 degrees F the entire time, end of story) to a dry salt brine, to "blasting" the turkey at 500 degrees for the entire cooking time. Some recipes said to flip the turkey; other said to put it into the oven legs first. The high heat method warned the reader to have a clean oven. I considered them all, and finally compiled this recipe with bits and pieces from all of them. This recipe may not win any awards, but it gives a tasty, well-cooked turkey that is anything but dry. It also gave me the chance to use my favorite cooking tool, a cast iron dutch oven.

I'm fortunate to own a huge cast iron dutch oven, and it's been especially useful for cooking piles of food for many groups of people. That, of course, makes it a natural to be the vessel of choice to cook a Thanksgiving turkey. Here's one recipe for preparing a holiday bird that you may find useful, especially if you have a big cooking pot. What's more, the heavy iron cooked this turkey very quickly: the bird was fully done in an amount of ranging from one-third to one-half less than the traditional oven roasting time of three to four hours.

(However, another person on the Cast Iron Cooking group simply inverted a cast iron pot, placed it upside down on the floor of his oven, and rested the roasting pan on top of that.)

A bare metal cast iron dutch oven can cost only a fraction of the fancy French-made enameled cast iron pots. The lowest price I've seen for a pot of this kind is the Harbor Freight Tools 12-inch dutch oven, which sells for $30 as of the fall of 2016. Likewise, a larger and reasonably low-priced cooking pot is the Camp Chef Classic Deep 12 inch dutch oven. Meanwhile, the most popular "deep" dutch oven of this sort is the Lodge Logic 8-quart cast iron camp dutch oven.

I've read about dry-brining the turkey with salt instead of using a wet brine. I like the results of a wet brine, as it keeps the meat moist and juicy; also a wet brine takes only one day as opposed to two to three days for a dry brine. For Thanksgiving of 2015, we'll be using a buttermilk brine!

In a container over one gallon in size, such as a large bowl or plastic container, add one gallon milk. Stir in 1 cup apple cider vinegar. Wait 15 to 20 minutes for the milk to curdle and become buttermilk. Stir in salt, sage, thyme, rosemary, pepper. The brine is ready to be used.

Place the cast iron pot, empty but with the lid on, into the oven. Preheat oven and iron pot to 450 degrees F.

Prepare a spice rub of your favorite poultry spices, such as thyme, rosemary, black pepper, paprika, and any other spices you prefer.

Slice the carrots and celery stalks into thirds. Slice the onion in half, peel them, and slice the halves again to quarter the onion.

This turkey does not require basting – once it goes into the oven, you don't have to do a thing until it's time to remove the lid. The basting mixture is prepared in advance while the pot is heating, so it can be applied to the turkey after it goes into the blazing hot cast iron pot. In a saucepan, melt 2 sticks (1 cup) of butter. Pour the butter through a fine strainer into a separate warming pan (such as a cast iron pan), and strain the fat out of the butter to produce a clarified butter. (If you prefer, look in the international food section of the supermarket, or go to an ethnic market that serves Indian food (India the country, that is), and purchase some ghee. This is clarified butter.) Mix 1 teaspoon paprika and 1 teaspoon ground pepper into this liquid. Keep the warming pan on the stovetop at a very low heat, to keep the basting liquid melted so it can easily be poured over the top of the turkey.

Thoroughly rinse the turkey, and discard the brine mixture. Dry off the turkey with cloth or paper towels, including the inner cavity. It doesn't have to be bone-dry, but at least so it won't soak your hands when you lift and move the bird. Apply the dry rub, rubbing it over the entire surface of the turkey.

Stuff the turkey cavity with the onion, carrots, celery, sprigs of thyme, and the bay leaves. 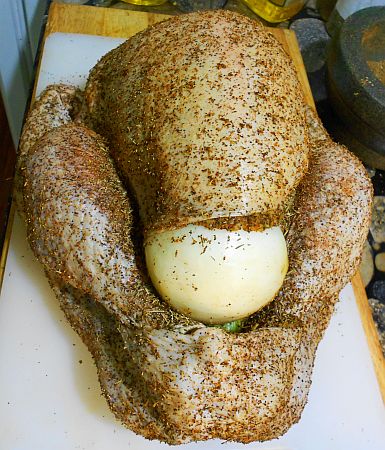 When the oven is at 450 degrees F, CAREFULLY remove the dutch oven and place it on your stovetop. Remove the lid. (Remember, this is a VERY HOT and VERY HEAVY iron pot! Use heavy gloves or oven mitts, and be careful.) Place a trivet on the floor of the dutch oven. Place the turkey on top of the trivet, breast side up. Spread the basting mixture over the entire top of the bird, to produce a crisp and dark skin. (Use all of the basting liquid now!) 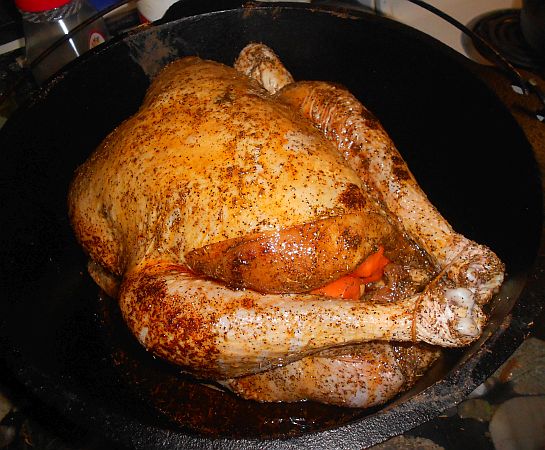 It is not necessary to add any additional liquid to braise the turkey, because the turkey has been brined and coated with the basting mixture. The turkey and the vegetables will release their own liquid as they cook.

At this point, place the turkey giblets into a saucepan. Add four cups of water to the saucepan. Bring it to a boil, then lower the heat and simmer for at least thirty minutes. This will produce turkey broth, which will be used in the gravy (see below).

Remove the mirepoix vegetables (onions, celery, carrots) from the turkey, and use them to make gravy (see below). You can now stuff the turkey with whatever stuffing you want.

Roast until a meat thermometer inserted into the side of the bird, just before the thigh (but not into the thigh itself), reaches 180 degrees F. Allow the bird to stand about 30 minutes before carving.

Here's one of the best reasons to use a cast iron dutch oven rather than one of those useless aluminum foil turkey roasters: you can use the same pot to prepare the gravy, without wasting those precious juices and scrapings!

As noted above, the giblets are simmered in a saucepan along with 4 cups of water to produce turkey broth. After the turkey has been removed from the pot, pour the entire saucepan full of broth, and the giblets, into the dutch oven. Gather the used mirepoix vegetables from the turkey – the onions, celery, and carrots – and add them to the pot. Pour three cups of chicken broth into the pot. Place the pot onto the stovetop burner at medium heat, cover the pot, and bring it to a boil. Uncover the pot, and stir the boiling stock for about ten minutes. This will reduce the liquid. 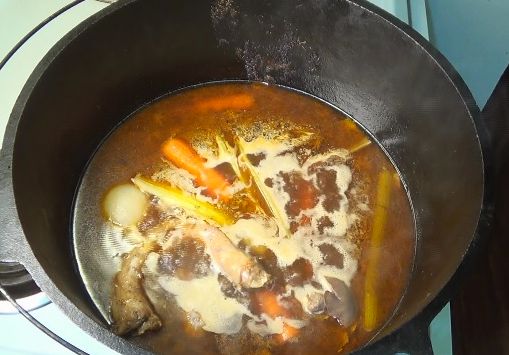 Remove the large pieces of meat and vegetables, using a slotted spoon. Continue stirring the broth.

Using a turkey baster, remove the stock from the dutch oven, and transfer it into a big glass or metal serving vessel, such as a big measuring cup. Place the sifter over a glass or metal bowl, and pour the broth through the sifter into the bowl, to strain out the extra clumps.

A YouTube video showing how the gravy is made: Cast Iron Turkey Gravy