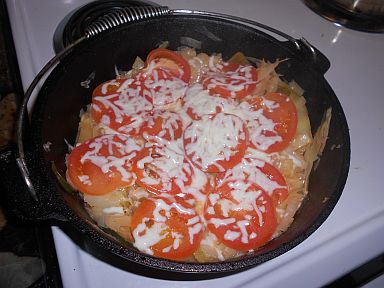 This recipe for skillet cabbage originally called for large amounts of butter, diced tomatoes, bread crumbs, and a full cup of cheddar cheese (Two recipes combined: southernfood.about.com/od/cabbagerecipes/r/bl30207d.htm plus southernfood.about.com/od/cabbagerecipes/r/bl30727h.htm ); all of that would have smothered the cabbage, of course, and left a pizza-like taste to the dish – which would have tasted good, but I wanted to eat healthier and taste the vegetables in this dish. (A sprinkling of cheese is healthy; an overwhelming mound of cheese isn't.) I ended up using the Bayou Classic 4-quart dutch oven, and the vegetables filled the entire pot when I started cooking; though the cabbage did wilt and provide more room to stir. Because this dish uses butter and cheese, it can technically be labeled "vegetarian but not vegan."

In a large bowl, shred the cabbage, chop the cucumber, celery, and onion. Slice tomatoes, but put them aside for later. Melt the butter in a cast iron dutch oven of 4 to 5 quart size, over medium heat. Add seasoned salt. Add chopped vegetables (except for tomatoes). Cook, covered, over medium heat for 15 minutes, stirring every 3-4 minutes, until the cabbage is soft and wilted. Blend vinegar and sugar; add to cabbage mixture. Stir gently to blend. Top with sliced tomatoes. Cover for 5 minutes to heat up the tomatoes, then sprinkle cheese over the top. Heat until cheese is melted.

What I'm especially enjoying is the combination of vinegar and sugar. It has a pleasant taste, the vinegar doesn't overpower everything. Combined with the sweetness of the celery and onions, it gives the cabbage a refreshing, sweet taste that still has a hint of tartness from the vinegar. I grew up loving the taste of vinegar, and my favorite way to have cabbage was to drown it in vinegar or worcestershire sauce; but this dish allows the flavors to mix in and give it a more mellow but springy taste.