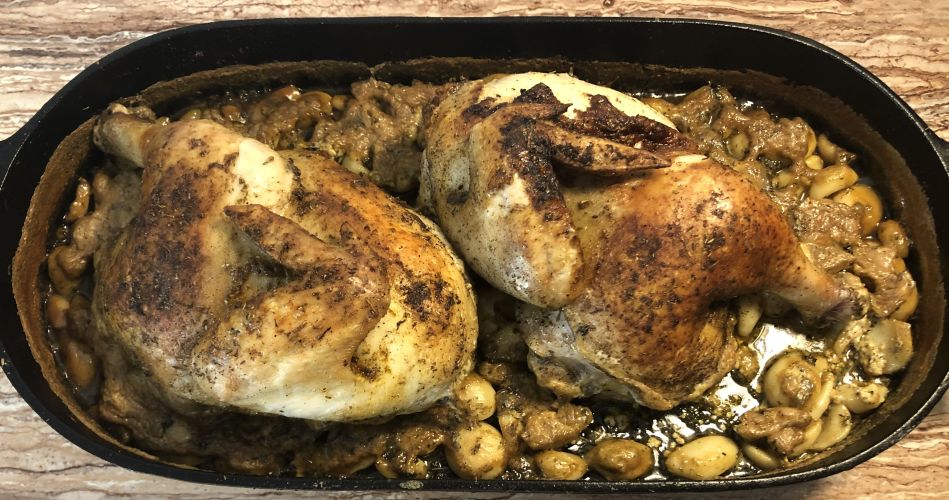 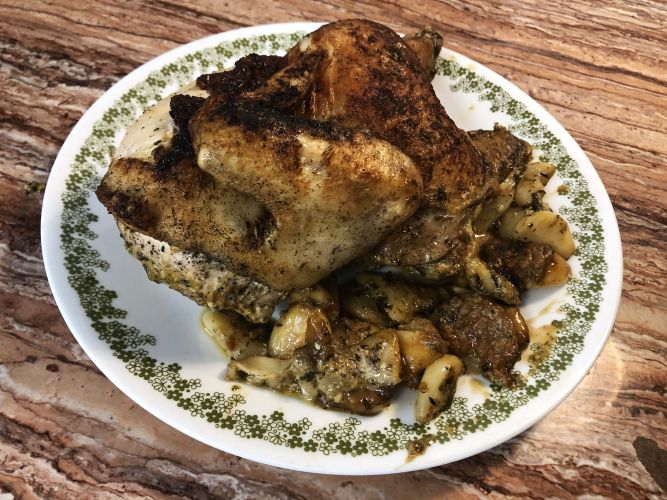 There are at least a hundred different ways to roast a chicken, ranging from easy to ridiculously difficult. This certainly an easy way to roast a chicken, but the result with this method is certain to be a chicken that stands out and will satisfy any dinner guest. This is a take on the classic recipe Chicken with 40 cloves of garlic, though with this recipe there's no such thing as too many garlic cloves.

As anyone who has made spatchcock chicken knows, cutting a whole chicken in half will help the chicken cook thoroughly, and in far less time. Since you don't have to worry about the chicken inside the cavity being undercooked, this is a reliable method for roasting a chicken – or a turkey, or any other poultry.

And once again, here's an essential tip on how to ensure your chicken is fully cooked and not overcooked, or undercooked: use a thermometer and cook by temperature, not by time! Whether you're using a chicken that weighs 3 pounds, 5 pounds, 8 pounds, or a Cornish hen, it will still be done when the meat temperature reaches 165 degrees Fahrenheit. Although cooking a half chicken will still allow the chicken to finish cooking far sooner than a whole chicken, you should still use a thermometer and be the chicken isn't overcooked.

Prepare at least 40 peeled garlic cloves for use in this dish – though with this dish, there's no such thing as too much garlic! If you can prepare 60 cloves, either by peeling them or buying containers of peeled garlic at the supermarket, then you can certainly do so.

You can use your favorite spice rub with this chicken dish, though here we're using a simple rub of "Simon and Garfunkel" spices – parsely, sage, rosemary and thyme – along with onion powder, smoked paprika, salt, and pepper. Combine these herbs together into a rub for the chicken.

Preheat the oven to 375 degrees Fahrenheit, and place a large cast iron skillet on the stovetop – or two cast iron skillets, so you can sear both chicken halves at once. While these are heating up, cut the chicken into two halves using the following directions.

It isn't even necessary to cut the chicken in half, but I do recommend doing so. As anyone who makes spatchcock chicken will tell you, chicken halves are much easier to cook than a whole chicken, and they cook much faster. That's because you don't have to worry about the inner cavity of the chicken. Take a good set of kitchen shears, and cut out the entire spine of the chicken. Cut on each side of the spine, all the way from the bottom to the top. Once the spine is removed, set it aside for use in making chicken stock (not part of this dish). Fold open the chicken. Now, you can use a good sharp knife, or the same kitchen shears, to cut along the breastbone and cut the entire chicken into two halves.

Add about 2 tablespoons of cooking oil to each cast iron pan. Place a chicken half into the each hot pan, and sear the chicken on both sides so the skin is browned. Flip each chicken half after about two minutes, so they are browned on both sides. Next, remove the chicken pieces from the pans and set them aside. Add about 2 tablespoons of brandy to each pan. (If you're using one large pan, add 1/4 cup of brandy to the pan.) The grease and liquid in the pans can now be used to cook the garlic cloves. Add the garlic cloves, and stir fry them for only about 30 seconds to a minute. This will be enough to lightly brown the garlic, and that's all we want to do. We do not want the garlic to burn! After frying the garlic for one minute, add about 1/3 cup of chicken broth to each pan. This will prevent the garlic from burning. To this, add another teaspoon or two of dried thyme, then add 1/2 cup of cream to each pan.

along with some brandy. After this, chicken broth, cream and more brandy were added to the pan, the chicken halves were placed into the pan, and the entire dish roasted at 375 degrees Fahrenheit until the chicken reached 165 degrees. This took about 40 minutes. As anyone who makes spatchcock chicken will tell you, chicken halves are much easier to cook than a whole chicken, and they cook much faster. That's because you don't have to worry about the inner cavity of the chicken.

The chicken was thoroughly cooked and juicy, the white meat wasn't dried out, and the garlic cloves were soft enough to squish with a fork. If you've never had roasted garlic, you absolutely need to give this a try. The cooked garlic does not become incredibly strong garlic – just the opposite. It mellows, takes on a nutty flavor, absorbs the flavor of the chicken, and is so delicious you can just scoop them out of the pan with a spoon and eat them. Or, even better, you can spread the garlic on buttered bread with a knife or fork, for a garlic bread that can't be beat. 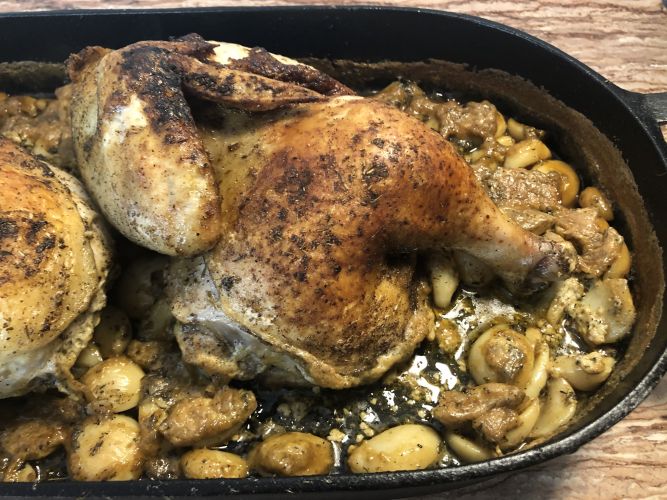