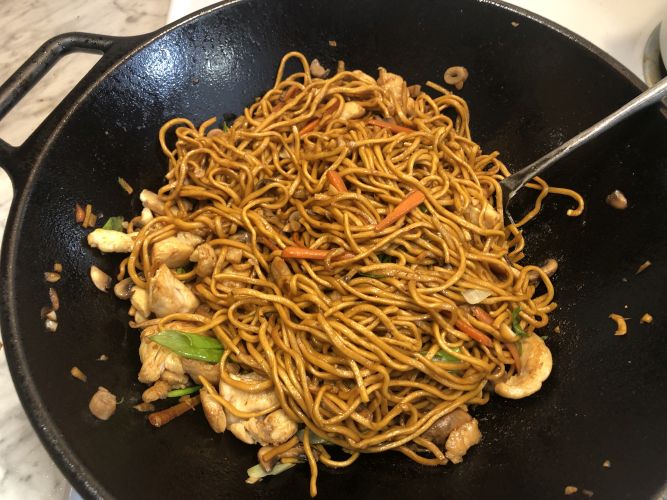 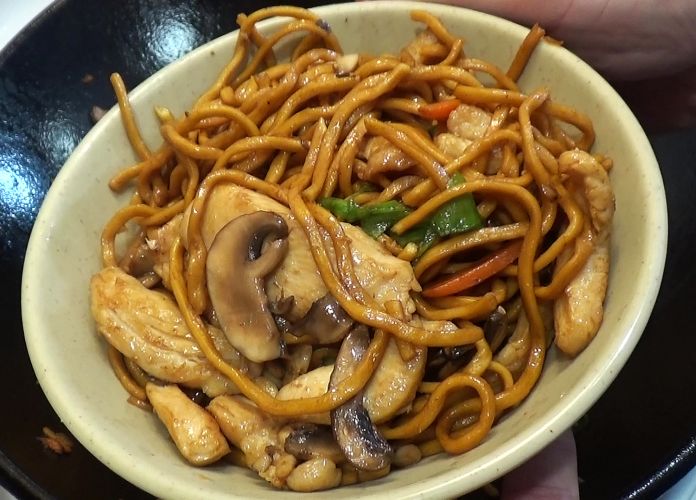 Whether you're making lo mein or chow mein, this is an exceptionally easy and popular dish to make in a cast iron pan. What's the difference between lo mein and chow mein? Essentially, the only difference is in the way the noodles are cooked. When you're making lo mein, the noodles are simply boiled in water, while the additional ingredients are stir fried in a wok, along with a tasty sauce to add flavor. The cooked noodles are added to the stir fried ingredients and sauce and mixed together…and you have lo mein! Chow mein, meanwhile, involves frying the noodles until they are slightly crunchy, and then adding the stir fried ingredients and sauce. Because it requires one extra step to fry chow mein noodles, although this is still an easy step, many people (and restaurants) simply make lo mein.

Two of the most Asian basic foods to cook in a cast iron wok are rice and noodles. Cast Iron Fried Rice is so easy anyone can do it…and, so are noodles. However, here in the USA people are less likely to make noodles in a wok than fried rice, and this may be because of "cheap" ramen noodle bricks. These noodles are made from flour, and there's nothing wrong with making a tasty Ramen Noodle Stir Fry. Traditional lo mein noodles are made from eggs. They're egg noodles, and they can easily be bought at most stores at a very low price. If you are going to buy dry egg noodles and boil them, you'll usually find flat noodles rather than the round, spaghetti-shaped noodles seen in most Chinese restaurant lo mein. Most of these recipes for lo mein noodles say you can't find a package labeled "lo mein" in Asian markets; but I didn't have any difficulty at all finding these the refrigerated section. They're more fresh then the dried noodles, but when they are cooked they made turn out drier than if you start with dried noodles and boil them to taste. 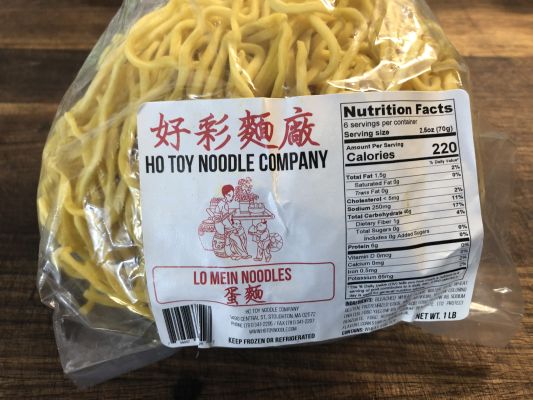 A good stir fry does require a lot of preparation in advance, because you can't do very much prep work while you're cooking over a blazing hot wok! The actual stir fry itself only takes a few minutes, and you need to have your ingredients prepped and ready to go into the wok quickly. This is why it's necessary to chop and mince your aromatics in advance, while the wok is still heating up.

The meat should be prepared first, so that it can marinate while the other ingredients are being prepared. In addition to preparing the sauce to flavor the lo mein, we're using another classic Asian stir frying technique known as velveting to prepare the meat. This consists of:

While the wok is heating up:

And now for the final part of the preparation: prepare the lo mein sauce.

At this point it may seem obvious why not many people make lo mein at home when compared to a simple fried rice. However, I intentionally added more steps here by doing the velveting technique with the meat. That's because it's worth it, as you'll see, because now, at last it's time to fry!

Here's the difference between cooking on a cheap electric stove like this one, and using an authentic gas stove with a rocket burner for a wok.

And at last, the noodles!

At first the noodles will look as though they've stuck together into a big spongy pillow. But that's not permanent, and a few minutes of stir frying will separate everything and give the noodles the consistency you expect from an Asian restaurant.

And with that, we are done! It did take a lot longer to make this stir fry then what you'd get in a restaurant, but of course at the restaurant all that prep work was done in advance. The actual frying did take longer, but this was done on a cheap American electric stovetop. But because we made this in a heavy cast iron wok, the result is an authentic style lo mein noodle stir fry that's as good as any take-out. And because it's fresh and hot, it may even be better.