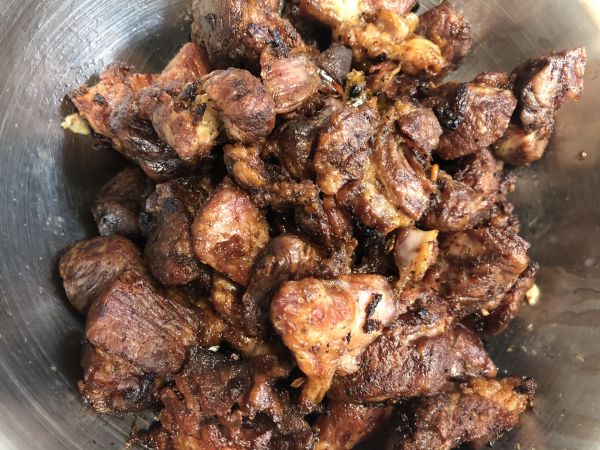 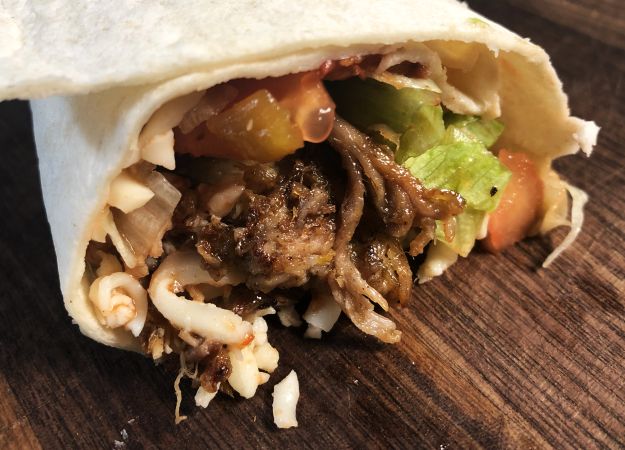 This is one of the most famous dishes to come from Mexico: slow-cooked pork, shredded and fried up to give a crispy and wonderfully delicious take on pulled pork. After you've tried carnitas you may never be satisfied with pulled pork, simply because while pulled pork is easy to make and delicious, this will take your pulled pork to a new level. In fact, there are two ways to make this dish: the easy way and the "traditional" way. The easy way is to slow-cook a big pork shoulder in a cast iron pot until it falls apart, producing a tasty and very satisfying pulled pork. The "traditional" way is also easy to do, and it's faster than the usual slow-cooked method. However, the "traditional" method for making carnitas involves deep-frying the pork pieces in lard, for as long as two to three hours. Because not everyone wants to use up to a gallon of lard in the making of this dish, the "easy" way is the more popular method for making carnitas. But if you want to make the extra effort and cook this dish in lard, you'll have a feast you won't soon forget.

Pans needed: A large cast iron dutch oven, at least 5 quarts in size. Depending on the amount of pork you'll be preparing, you may want to use a pot much larger than this. You'll also need a large cast iron skillet, 10 to 12 inches in diameter (or even larger if you have one!), to sear the shredded pork. A large metal bowl is also useful for keeping and shredding the cooked pork.

Whether you're using the "easy" way or the "traditional" way, the ingredients for this dish are essentially the same. The traditional manner does have one additional ingredient: lard. Lots of lard.

Preparing pulled pork is one of the easiest ways in the world to cook a large pork shoulder, and here is no exception. If you're using a full bone-in pork shoulder, it will be necessary to carve the pork shoulder and remove the fat cap (the skin), as well as removing the pork from the bones. Once this has been done, cut the pork into pieces about 1 to 2 inches in size.

In a large bowl, stir the ingredients into the pork pieces: salt, pepper, garlic, onion. Squeeze the juice of two oranges onto the pork and stir it all around. Cover the bowl with plastic wrap, place it in the refrigerator, and let the pork marinate for at least two hours.

When you are ready for cooking, preheat the oven to 225 degrees Fahrenheit. Place the pork pieces into a large cast iron dutch oven. Add about 1 cup of your favorite braising liquid (water, chicken stock, beer, whatever you want) to braise the meat. Cover the pot, place it in the oven, and let it slow cook for 6 hours.

After 6 hours, remove the pork pieces from the dutch oven and place them in a large bowl. From here, the pork is ready to be shredded and fried, which we'll be talking about below.

Confit -- the ancient and traditional method

The traditional method for preparing carnitas takes about three hours rather than six hours. More importantly, it gives you a big pot of cooked pork that is far, far more delicious than your usual slow-cooked pulled pork. Even though we'll be deep-frying the pork in lard, it will still be slow-cooked.

There's even a fancy name for this method of cooking. It's called confit, and it involves deep-frying the pork in lard, heated to a low temperature. The meat is gently cooked at this temperature for two to three hours, until it's ready to be pulled apart. You can heat the lard to the usual temperature of 350 degrees Fahrenheit and cook it fast, and if you do it in this way it should be ready to eat in under an hour. Deep fried pork is a treat you shouldn't pass on – at least once in a while! – whether it's cooked fast or slow.

Anyway, to make carnitas in the traditional manner, you'll need a whole lot of lard. 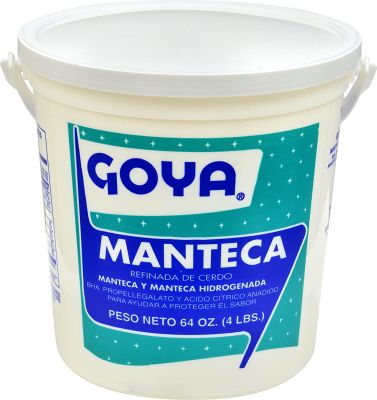 This bucket gave about half a gallon (64 ounces) of lard. Some articles on using lard say to use as much as a gallon of lard, but I found this amount to be fine for preparing carnitas.

To prepare for cooking, take a really big cast iron pot and place it on the stovetop. Scoop and empty the entire container of lard into the pot. Heat the stovetop burner to no more than medium heat, and slowly melt the lard. The temperature of the melted lard should come to only around 200 to 220 degrees Fahrenheit. 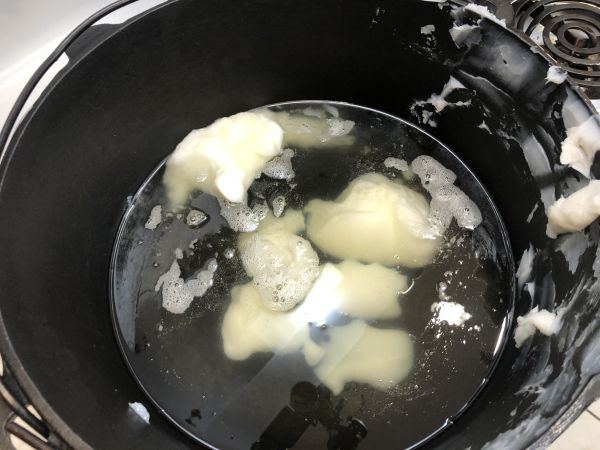 Once the lard has melted and reached the correct temperature, add the marinated pork pieces to the pot. You don't have to space out the pork pieces when placing them in the lard. It's okay to completely cover the bottom of the pot with the meat, with very little space between meat. The meat should be completely covered with the liquid, though it will work fine if it's only barely covered. Because we're cooking with lard rather than water, the liquid won't reduce as it cooks. The meat will shrink as it cooks, and when it's done it will be much smaller in size. You can leave the pot uncovered during the entire cooking time.

The liquid will begin bubbling when it passes the boiling point of 212 degrees Fahrenheit, and you don't want to bring it to a higher temperature. Keep the temperature in the range of 210 to 220 degrees. As the meat cooks, the temperature will rise very slightly.

The meat will be ready when each piece registers over 200 degrees with a probe thermometer. It will take about two and a half hours for the meat to reach this temperature.

When the meat is ready, remove the pork pieces from the boiling lard, and reserve them in a large metal bowl. We're now ready to shred and fry the pork. 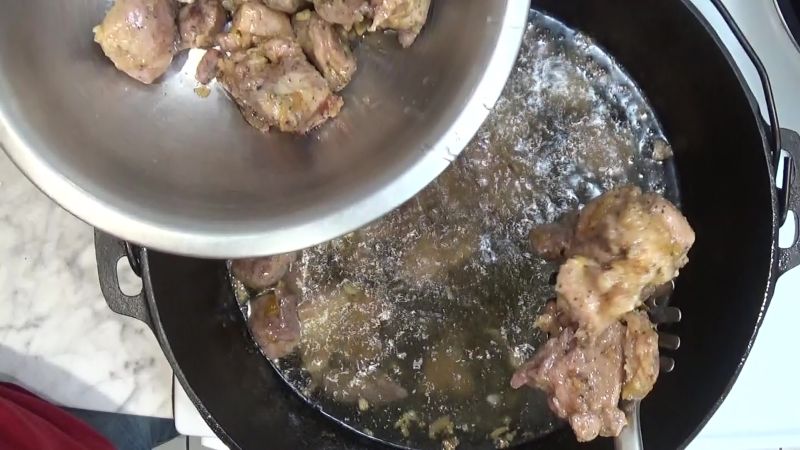 Shred and fry the pork! 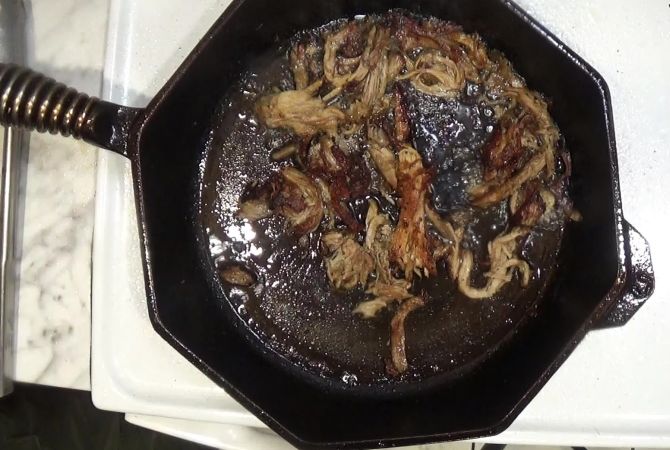 Whether you're using the "easy" way or the "traditional" way, this step is the same. Place a large cast iron skillet on the stovetop, and begin heating the pan to searing temperature. Heat the pan dry, without oil, for about ten minutes on medium heat. The pan will be ready for cooking when the surface temperature passes 500 degrees Fahrenheit.

While the pan is heating, take two forks and shred the pork.

When the pan is ready, add a couple of tablespoons of the lard to the pan and melt it. (It should begin smoking immediately when it hits the hot metal!) Place the shredded pork into the hot oil and sear it, so it will become crispy. Don't stir fry the pork very much: allow the bottom side of the pork to become brown and crispy. After letting it set for about two to three minutes, stir the pork around to ensure it has a good mixture of crispy and chewy meat.

Fry the pork in batches until it's entirely done in this manner.

Serve on tortilla or taco shells with your favorite dressings, or accompanied by beans, rice, or whatever you want.