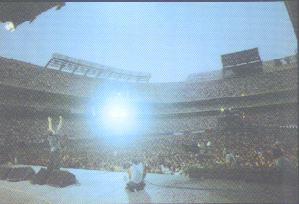 The name says it all. Hope you don't mind songs about…

Bill T. Miller: Out of Band Experience and Kings of Feedback

The King of Slack was present at the great X-Day Drill of 1998, and has passed into legend.

Two post-humans. One xenodimensional . The three are the weirdest music project that will ever melt your throbbing brain down to its stem.

High-minded spiritual musicians and performance artists who get together to jam four times a year.

The High Keeper of the greatest collection of bulldada music to ever grace this planet!

The Duke of Uke

How many people do you know who would dare to get up on a stage in front of drunk heavy metal fans and play Led Zeppelin and Jane's Addiction songs on a ukelele?

The master of ambient techno rhythms!

ALL mutants bow in honor of the spastic ultra-loser who slings a KILLER guitar…LITTLE FYODOR! Your life is not complete until you have seen him play!

Christianity Is Stupid. Give Up! Give Up!

Musical Deities and Bands You Need To Hear

Kate Bush's fanatical fandom compares to the fanboys of the Grateful Dead, but she deserves the accolades!

And Through The Wire - Peter Gabriel

Living proof that being an internationally famous rock star does not automatically make you a sell-out.

Links to many techno music artists that you will never hear on the radio.

the KLF, also known as Justified Ancients of Mu Mu, sometimes known as The JAMS. Latterly a non-music project: "The K Foundation". (See also The Foundry)

Soothing music to hate with.

One of the greatest voices in world music! (The vocalist behind The Last Temptation of Christ.'")

A terrific instrumental cosmic rock band that may have started as a Pink Floyd clone, but evolved into something far greater.

I was lucky enough to see Sun Ra in concert in Somerville, Massachusetts back in the late 1980s, before he left this plane of existence. He won a new convert that night, and his music has never left my CD player.

There's a fine tradition of music being used to teach children about God, but little Marcy tops them all.

The Cake and Polka Parade

"Crackpot Music Siftings, Geniuses Incompetents & Audio Debris" Some of the most obscure bulldada recordings that I've ever come across on the net.

Sample testimonials: "I found the Tom Bosley Experience to be just that - a weird yet functional poetic tribute to every genre of music placed in one serving. Get [The Spark of Inspiration]. It's so worth a good listen. NZ has produced yet another talent." -Keith Wright, Singer/Songwriter
"I really like 'The Weekend Song' and 'Oh Mr Sheffield'. LOL, I was dancing around the lounge in my undies and toe socks singing, "My nipples hardened!!!" and waking the neighbours up!" -Kelly, Checkout Queen

April Winchell, daughter of ventriloquist Paul Winchell (and "sister" to Jerry Mahoney) is a radio host on KABC AM 790. She's a collector of bizarre musical recordings, as her website will attest. Lots of strange covers of popular tunes (Mr. Ed theme in German, French version of Green Acres theme, etc.), sickening religious music, and KFC training tapes. A little "cutsie" in general but a few gems are buried there.