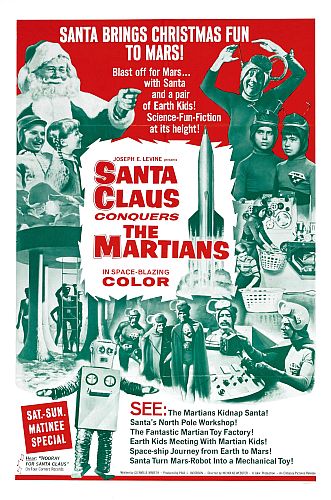 Way back when I was a young 'un (some time in the mid-1970s or so), the timeless holiday classic (ahem) Santa Claus Conquers The Martians was broadcast on our local station for a Saturday afternoon movie. My brothers and I started watching it, but they became bored (or worse) and wandered away from the TV. I didn't, however; for some reason I still don't understand, I sat and watched the entire movie. This may explain my state of mind today.

Of the various kiddie-oriented holiday movies to appear over the years, Santa Claus Conquers the Martians is easily the most infamous, the most despised, and the one pointed to as the worst Christmas movie of all time (if not the worst movie ever). This movie is often compared with the two most famous bad movies of all, Plan 9 from Outer Space and Robot Monster. Among fans of Mystery Science Theater 3000, Santa Claus Conquers the Martians (I'll call it SCCTM for now) remains one of the most popular episodes – not just because the comedy is so good in this particular one, but because the movie is indeed so bad.

But comparing SCCTM to Robot Monster and Plan 9 is like comparing apples and oranges, for a number of reasons. First of all, both of those other classics of bad film were honestly made with good intentions: their creators honestly believed or hoped they were weaving exciting, terrifying tales of monsters from outer space, to scare their audiences and deliver a good time at the movies. Science fiction films of the early-to-mid-1950s had not yet been relegated to the status of low-budget kiddie entertainment, and their creators had enough faith in their visions to persevere and bring them through to the final versions on screen…which were subsequently rejected by howling, laughing audiences. But still, they were brave enough to try; and this is why Robot Monster and Plan 9 are still enjoyed and respected (after a fashion) by audiences today. Sympathetic movie fans know that these movies are indeed as awful as their legends say, but they still respect the directors and actors behind them. And despite their legendary status as the so-called "worst" movies ever made, I can honestly say I've seen worse. (Have you ever seen a double-feature of Navy Versus the Night Monsters and Women of the Prehistoric Planet?)

Which brings us to Santa Claus Conquers the Martians. I'll say that I know very little of the behind-the-scenes decisions that resulted in this piece of celluloid excrement, but it sure seems safe to say that there was no great creative vision involved in the concept. Some marketing guru had the the bright idea of making a Christmas-themed "science fiction" movie to foist on the little kiddies – something that was practically guaranteed to make a profit, especially if the production budget was kept low. And he was right, too: SCCTM was re-released to matinee theaters across the country and around the world for the next twenty years, and the movie did indeed bring in a profit. It also caused some children to start screaming and crying, according to legend, but who cared about that? (The movie's profitability makes me wonder why the movie's producers let it lapse into the public domain; this is why the only copies of the movie available on video today have washed-out, dark, mauve-tainted prints.) SCCTM is hardly alone in its opinion that kids will watch anything put in front of them, if it's meant to appeal especially to kids.- – something that continues through the present day. (Can you say "Yu-Gi-Oh!," boys and girls?)

Yet despite the five seconds or so it took to come up with the deeply moving concept of Santa Claus being kidnaped by Martians, the screenwriters assigned to the project (listed in the Internet Movie Database as Paul L. Jacobson and Glenville Mareth) still did their best to produce a decent story, one that took care to treat the beloved image of Santa Claus with respect. While the movie suffers from lapses in logic (of the kind that would make Dustin Hoffman in Rain Man say "this sucks!"), there are still some moments in the story that suggest the writers were trying to give it some kind of decency.

John Call's performance as Santa Claus has been called many things, ranging from "half-drunk" to "high on LSD," but I'll disagree with this and say his performance is actually decent. He gives us the Santa that children know and love: always smiling and laughing, jolly, respectful, similar to Bugs Bunny in his certainty that he's never in any real danger (which makes it easy to forgive Voldar the evil Martian), and possessed of an infectious glee and jolliness that mysteriously turns the attacking Martian robot Torg into a toy, and makes the young Martian children smile with joy. (Well, if the kids playing the Martian kids had turned in a decent performance – and yes, I know that's Pia Zadora – then we might have better been able to suspend disbelief and accept Santa bringing joy to the children of Mars.) Even the rebellious Martians are affected by Santa's jolliness (except for the evil Voldar, of course); and even he even makes us believe (sort of) that Santa Claus can meet Martians. After all, we still respect John Carter and Barsoom – why not let Santa Claus meet the Martians? Even J.R.R. Tolkien wove fairy tales of Santa Claus and his friend the Polar Bear constantly battling evil goblins (The Father Christmas Letters). Bringing Santa Claus to Mars is hardly the worst thing to happen to the jolly old elf over the years.

People have also laughed at the earnest performance of Leonard Hicks as Kimar, the "King Martian." He's the guy who takes his role so seriously, you'd think he was acting in a Shakespeare drama (except that he has to wear a helmet with antennae). Yet Kimar shows us that if the other performers has approached the movie in the same manner and put in some good performances, then even a storyline like this might have become more enjoyable. In comparison, Rankin-Bass' The Year Without A Santa Claus doesn't exactly have a believable storyline either, yet it's still fondly remembered because its creators didn't talk down to the audience…and the special effects were better.

Still, it's hard to suspend disbelief in the face of low budgets and an uncaring attitude on the part of the producers. This hampers the movie more than anything else (except maybe Dropo), and this above all is what reveals the movie as the hack job it is: ultra-low-budget sets, a performer in a polar bear costume, the silly Martian "nukular curtain" force field with red and green light bulbs, some howlingly bad lines of dialogue (Santa saying "I'm not tired - but my finger is!") and a ridiculous, poorly-staged fight scene between Kimar and Voldar that makes the viewer think, "Gad, I could do a better fight scene than that!"

And then…there's Dropo. Dropo the idiot, Dropo the humorless comedy relief, Dropo the laziest man on Mars. If there's one character who makes SCCTM live up to its reputation as one of the worst movies of all, it's Dropo. (The MST3K crew said, "Dropo, you're the Gilligan of your time!" – and they were right.) When we first see Dropo, Kimar is using a Martian wake-up wand (or something) to keep him from falling asleep on the job again, and he gives us a "funny" burst of hysterics that looks like a cross between an epileptic seizure and an LSD overdose. And it goes downhill from there, especially during a scene where he tries to put on weight to become Santa. He overacts and gives stupid facial expressions, accompanied by treacly music that even Mister Rogers would hate. Leonard Hicks may have rescued his decency as the antenna-wearing, green-faced Kimar by committing himself to the role and turning in a respectable performance, but Bill McCutcheon's Dropo is someone you would want to stick a knife into, because you know no jury would ever convict you. If SCCTM 's quality is destroyed by the ultra-low-budget sets, special effects, ridiculous stock footage, and embarassing one-liners, then Dropo is the final nail in its coffin.

So in spite of its reputation of being so bad, does Santa Claus Conquers the Martians really belong in the movie junk pile? Hell, yes! While it's not quite as bad as its legend portrays it, the movie's bad points – the special effects, the snore-inducing direction, the stock footage, Dropo, and that godawful song by Milton DeLugg – ensure that the best way to see this movie is indeed to check out the MST3K episode, which often skewers the movie itself right to the core. (This may be why that particular episode is so good!) The movie does try to give Santa the respect he deserves, but then again so do many other, far better movies. With its aspirations far lower than many other successful and not-so-successful low-budget science fiction and horror movies of the era, Santa Claus Conquers the Martians is richly deserving of its reputation as one of the worst Christmas movies of all time.

Dedicated SubGenii are able to list at least a dozen bad movies that can put this one to shame…and in most cases, they'll tell you that the only good things about these movies are the fact that they gave paychecks to some actors and actresses who needed the money, and they gave audiences fodder for laughter. There are other Christmas movies that can easily be roasted alongside SCCTM (Silent Night, Deadly Night anyone?), but the legend and appeal of this one make it a Christmas classic that will be with us for many years to come.