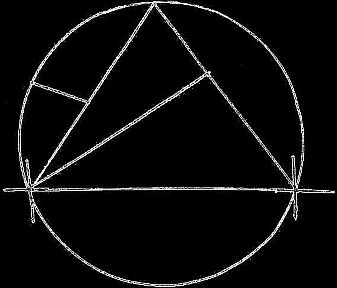 (As an experiment, I designed and "charged" this sigil to cast a spell upon YOU, the person reading this. No, I'm not going to tell you what it's for.)

One of the most popular (and the easiest) aspects of Chaos magic is sigil magic – designing and drawing magical shapes as a way of "casting a spell." Sigils have been around since the earliest days, and Chaos magic simply took the idea of a sigil and simplified it to its basic concept. The popularity of sigil magic stems from its simplicity: it is so basic that anyone can do it. You simply design a sigil to match your desire or intent, activate it, destroy it, and let it happen.

In Chaos magic, a sigil is essentially an aid to focusing. When I meditate, it is convenient for me to focus upon the image of a sigil, as a way to help me shift my consciousness and block out input from my environment. Focusing on a sigil is a way to make it easier to achieve gnosis. A sigil is designed as a way of symbolizing the intent of meditation. After all, there's a reason why we're engaging in meditation in the first place – are we just trying to calm our bodies down, or are we actually looking to achieve a "magical" effect? It's easier and more precise to focus our minds on a single image – a sigil – than to try to envision a phrase or a sentence such as "I will score with a chick tonight, huh-huh huh-huh."

In his Disinfo presentation and his popular essay Pop Magic, Chaos magician and comic book author Grant Morrison describes sigils in this manner:

"In the Pop Magic! style, the sigil (sij-ill) is the first and one of the most effective weapons in the arsenal of any modern magician.

"The sigil technique was reconceptualized and modernized by Austin Osman Spare in the early 20th century and popularized by Chaos Magicians and Thee Temple Ov Psychick Youth in the 19 hundred and 80s.

"A sigil is a magically charged symbol like this one:

"The sigil takes a magical desire or intent – let's say "IT IS MY DESIRE TO BE A GREAT ACTOR" (you can, of course, put any desire you want in there) and folds it down, creating a highly-charged symbol. The desire is then forgotten. Only the symbol remains and can then be charged to full potency when the magician chooses.

"First remove the vowels and the repeating letters to leave a string of consonants – TSMYDRBGC.

"Now start squashing the string down, throwing out or combining lines and playing with the letters until only an appropriately witchy-looking glyph is left. When you're satisfied it's done, you may wind up with something like this:

"To charge your sigil you must concentrate on its shape, and hold that form in your mind as you evacuate all other thoughts.

"Almost impossible, you might say, but the human body has various mechanisms for inducing brief "no-mind" states. Fasting, spinning, intense exhaustion, fear, sex, the fight-or-flight response; all will do the trick. I have charged sigils while bungee jumping, lying dying in a hospital bed, experiencing a total solar eclipse and dancing to Techno. All of these methods proved to be highly effective but for the eager beginner nothing beats the WANK TECHNIQUE."

(For more about the WANK TECHNIQUE, read Morrison's Pop Magic!.) There are many online dissertations on sigil magic, such as these: [1] [2] [3]

What I do is simply concentrate on the image of the sigil as I meditate, using the steps and tricks described earlier, until I feel I've achieved gnosis. At that point I can then forget the sigil and leave it buried in my subconscious. If you believe in magical "energy," this phase of the meditation would then be described as "charging" the sigil with magical energy and activating it. Chaos magicians often say they are "activating" a sigil or "releasing it into the subconscious." At this particular moment, we focus our belief that the sigil has been activated, and the "spell" has been cast.

Chaos magicians also frequently destroy the sigil in order to assist with forgetting it, and to impart the sigil into the subconscious.

Because I consider such situations as walking serenely and cooking as meditation, I've concentrated on sigils while performing these acts. I've even burned sigils in my cast iron pans, because I like the dramatic effect and the irony (pun intended) of such a theatrical and flashy act.

Because the sigil only has meaning for you, then it will work best if you design in it a manner only you can understand. Above all, do not tell anyone else the exact meaning of your sigil until you are positive that the effect has worked…and maybe not even then. Some Chaos practitioners believe all sigils should be kept a secret until after they have been effected, but I personally feel that you can design a sigil with the intent of making it public, such as the one placed at the top of this page. Even then, though, the sigil should remain mysterious in order to maintain its power. Remember, one of the most powerful aspects of Chaos magic is the power of belief. If a person believes the sigil has an effect, then it is much more likely that it will – whether that includes you, or the subject or target of your "spell." Even in the 21st century, "witchcraft" still causes hysteria and panic in much of Africa – not because it is effective, but because large numbers of people believe it is effective. (See also: Witch Hunters.) Until the vast majority of Africa no longer believes in witchcraft, incantations such as sigil magic will continue to have an effect…as it will on anyone who believes that it will be effective. That includes you, and me: if I believe this sigil will be effective, then I will look for proof (even subconsciously) that it was effective until I discover it. (Note the similarity between this and many ludicrous conspiracy theories, Creationism, and other areas that rely largely on faith and belief.)

Does it work? That's the mystery of magic: if the sigil has any effect at all, there's no way to actually point to a piece of evidence and say, "THAT is the result of the sigil." As with other forms of magical reading, you can only wait for the event to occur, and suddenly experience a moment of hindsight when you realize that, yes, this sequence of events coincides with what you had designed into your sigil.

As I've stated, I am not a believer in magical "energies" or outside forces. I consider the sigil to be an aid in meditation, one that I can focus on in order to better attain the state of gnosis and achieve the magical effect I am aiming to place upon myself. Even Peter J. Carroll has written and stated that "magic," as practiced by Chaos magicians, is a subtle affecting of probability and possibility in order to turn the tables more in the magician's favor. The primary aspect of the sigil is to place the intent of the spell into one's subconscious – and as such, it may possibly have the placebo effect of causing the spell caster to work that much harder towards achieving the goal (or the intent) of the cast spell…and thus provide the tipping of balance with the result of actually achieving said goal or intent. And then…well, what do you know? The spell worked!

A mantric sigil can also be created as a corollary to a drawn sigil. This is essentially a word or words (mantra), formed by arranging the letters used in the creation of the sigil. This is typically a nonsense word with no actual meaning or language behind it, other than the intent of the sigil itself. As with a drawn sigil, this magical phrase only has meaning for you, so it does not have to be spoken in an actual language. But as with the creation of a magical alphabet, some truly ambitious Chaos magicians may take the effort of creating their own artificial magical language especially for spell casting. (Shades of Ursula K. LeGuin's A Wizard of Earthsea.) The phrase Mod Externa, as seen on the front page of this very Web site, Cast Iron Chaos, is a sigil I developed myself. As I was designing a sigil behind a certain meaning related especially to myself, I suddenly discovered that the letters in my intent could be condensed into those two words, "mod externa" – and immediately upon forming these words, I had a sensation that this was right. It was correct. It was a moment of magic! I felt that this phrase, "mod externa" (which is not Latin, despite the resemblance to Latin), was there for me, and so I took it and used it as the motto of my Web site. The meaning of this phrase applies to me alone; it was a spell I had cast especially for my own benefit.

This application of mantric sigils can also be applied to Fotamecus, the time elemental created by Chaos magicians and then released onto the Internet for others to invoke. I've invoked him myself, especially when taking part in long drives in my car.

Here's an example of one of the best successes I've had so far as a Chaos magician: the night of New Year's Eve, December 31, 2011. After casting a sigil for success that evening, I wrote the following in my blog the next day, New Year's Day: "New Year's Day, 2012. This year has already kicked ass over 2011. Last night I had the most fun I've had in years on New Year's Eve, and magic was definitely involved: the exact kind of esoteric and impossible-to-pinpoint magic that I've seen since I embraced Chaos. For this weekend's festivities, I engaged in a summoning ritual and I successfully conjured a cybernetic rabbit spirit from the future, who manifested in many strange and unusual ways. The most unusual, and positive, aspect of this came when I designed and cast a sigil with the intent having an effect that very evening, a scant few hours after it was cast. Rather than phrasing it as a desire, I took a chance and made it a declaration: instead of "My desire is…" I simply stated my intention "Something Unexpected Will Happen Tonight" and sigilized it. I then burned the sigil in a cast iron pan to project it into the subconscious. I may be an anthropomorphic cat at heart, but last night the rabbit was my spirit guide: I followed the white rabbit, and even managed to engage in Kirlian photography that showed the aura of the rabbit. I followed the rabbit and let the magic happen, and the result was that last night turned out to be the best fucking New Year I've had in many a year. I made several interesting acquaintances and met one person who I do hope will be more than just an acquaintance.

The night's magic began with cast iron and ended with cast iron – true cooking magic. This makes me happy. Some people work magic with candles and cauldrons and pentagrams drawn on the floor. Cooking is my magic. My rituals involve cast iron over a blazing hot stove, wielding metal implements of culinary creation. The results of my cooking magic are slowly manifesting, but I am indeed gaining experience and confidence. Not the least of which was the way I cooked wonderful bacon two separate times in the space of five hours. I will be a beginning cook for a long time to come – but I am now an experienced beginning cook. I am achieving gnosis through my cooking."