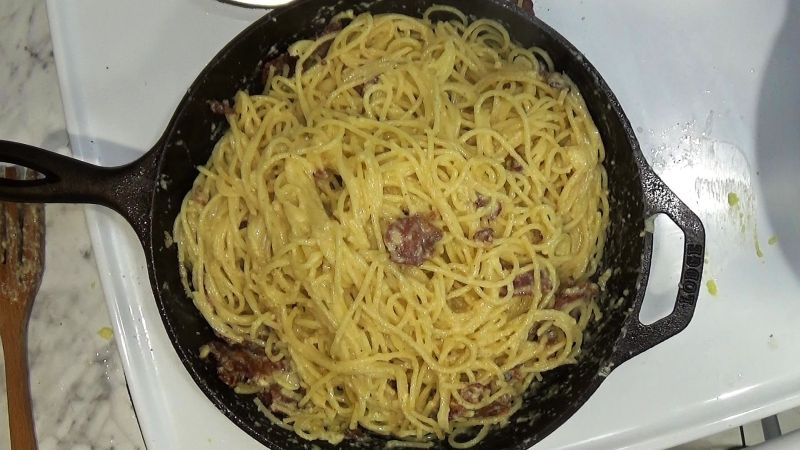 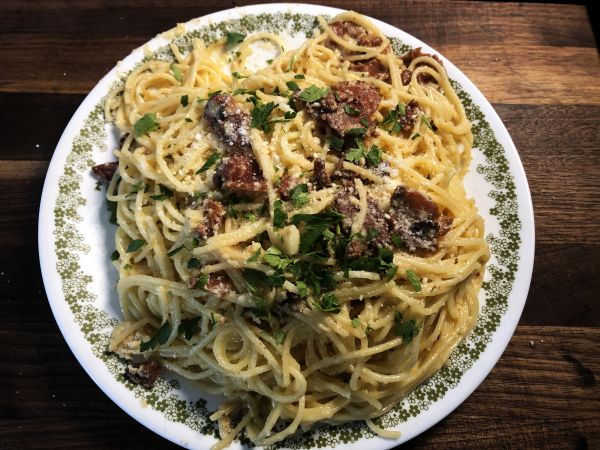 Here's a simple dish that doesn't require a lot of fancy ingredients, but it's considered a delicacy in Italy where it came from: spaghetti alla carbonara. This is spaghetti fried up in a cast iron skillet, with bacon and cheese added in to give it a taste that will keep you coming back for more. We don't use regular pasta sauce in this dish, and this will help you to stretch your food supplies a little more, as well as your budget.

Pans needed: A large stock pot for boiling water. One large cast iron skillet, 10 to 12 inches in diameter. And a small bowl for mixing the egg and cheese sauce.

Chop up some parsley to top the finished dish, and slice up a few cloves of garlic. Slice 8 ounces bacon into small pieces.

In a large stock pot, add 1 to 2 tablespoons of salt, cover the pot, and bring to a boil. While waiting for the water to boil, Place a large cast iron skillet on another burner and begin heating at low-to-medium heat, enough to cook the bacon but not extremely hot.

In the cast iron pan, cook the bacon until crisp. Don't drain the bacon grease, because we'll be using it to cook the garlic and pasta.

When the bacon is crisp, turn down the heat to medium-low, because we don't want the garlic to burn . Add the sliced garlic and cook for only a minute or two, until the garlic just begins to brown.

And now it's time to add the spaghetti. Mix the spaghetti together with the bacon and garlic, and make sure it's completely coated with the pan grease. The temperature is still low because we don't want to dry out or burn it. Once the spaghetti is coated in oil, add the egg and cheese sauce. Quickly mix it all together, because we don't want scrambled eggs in our spaghetti. Mixing it fast keeps the eggs from overcooking, and it only takes a couple of minutes. If it seems to dry, add a little of the pasta water. When the pasta is coated with a thick cheesy sauce, it's ready to serve.