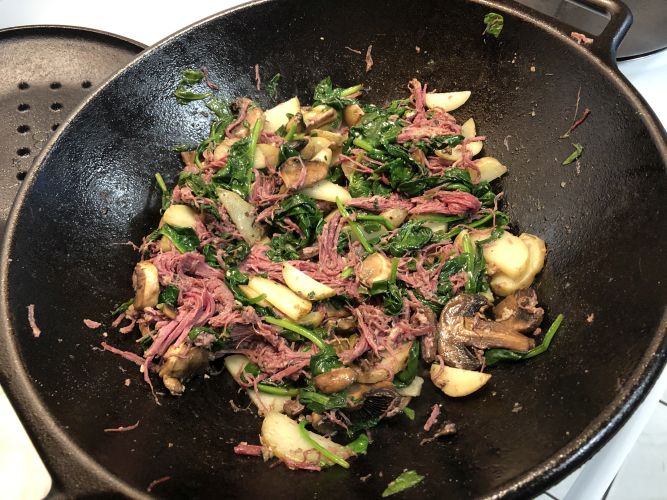 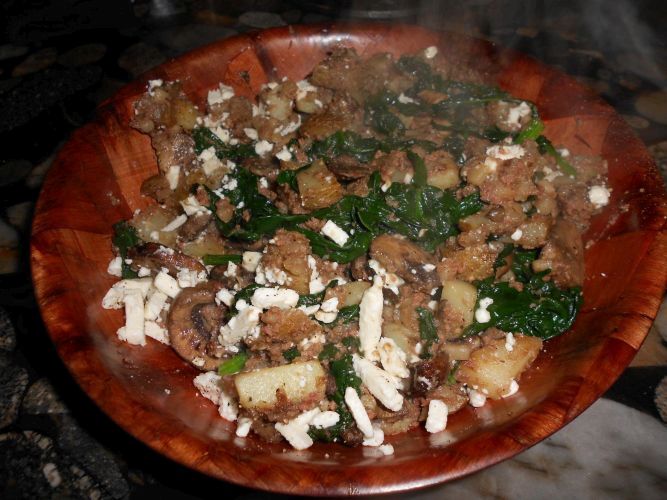 November 2010: For the past several years, one of the few dishes I was allowed to make exclusively on a regular basis was a disgusting mash of canned corned beef, canned spinach, canned mushrooms, crushed ramen noodles, and shredded cheddar cheese, all fried up in a wok and put together in a big bowl. We always thought it was tasty, which was why we had it again and again; but its consistency made it look as though it had been digested and regurgitated. I called it "fried vomit," while she felt the name "wok-n-puke" fit it more appropriately. And as for its healthiness…between the fact that it all came from cans, and the way I would add crushed ramen noodles to it to absorb the excess water from the cans, this dish was probably a salt bomb.

Recently, I've been inspired to do a lot more cooking with fresh vegetables instead of canned crap, and I'd been wanting to work out an improvement to this dish. Tonight I broke in my brand-new wok and gave it a try…and I think it came out quite well!

I've made this dish many times since then, and I'm quite proud of it. It's simply, easy, fast, healthy, and delicious.

Pan needed: Large stir-frying pan, such as a wok or deep skillet.

Preparation: Chop up the potatoes. Press or crush the garlic, chop it up, and put it aside. Chop up the mushrooms into a small bowl.

If you’re using fresh corned beef brisket rather than canned hash, the corned beef needs to be cooked in advance, to the point where it can easily be pulled apart. Use a slow cooker or a dutch oven to cook the corned beef overnight (or 6 to 8 hours), as per this recipe: ‘’Corned Beef and Cabbage in a Cast Iron Pot’’. When the corned beef is ready, cut it and chop it into fine pieces.

Heat up the wok on about 2/3 heat, and don't add the oil until the wok is hot. Wait until you can flick a few drops of water into the bottom of the wok, and watch them sizzle instantly and evaporate in one to two seconds. Cover the bottom with about a quarter inch of olive oil, and wait one minute for the oil to heat up.

Fry the potatoes in the olive oil until they're lightly brown. Dump the can of hash on top of the potatoes, and mix them up for about three to five minutes until the hash is soft and cooking. Add the fresh spinach on top of that, and mix it all together. As you mix it over the course of a few minutes, the spinach will absorb the moisture and change from big and leafy to the damp, soggy consistency you see when it's cooked or boiled. The potatoes and hash will blend together. Add the mushrooms and garlic, and keep on mixing the entire dish together until the mushrooms are soft, cooked, and no longer dry.

Serve in a large bowl, or two smaller bowls if you're feeding two. (I like to add fresh ground pepper at this point, because I love pepper.) Add grated or crumbled feta cheese on top. Alternately instead of cheese, use sour cream or Greek yogurt as a topping. The end result is a nice hash dish with extra flavor, very filling…and, no doubt, more healthy than canned ingredients. (Traditionally a fried egg is served on top of corned beef hash, but this dish actually tastes better without it.)