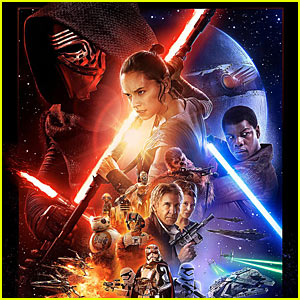 January 18, 2016: A month after its premiere, I've finally seen Star Wars: The Force Awakens. This may sound like a cop-out, but I'll agree with both the positive and negative criticisms of the movie. It wasn't perfect, but it was a lot of fun and that's what made it the most enjoyable movie I've seen since Guardians of the Galaxy. That may sound strange, but it's because Guardians captured the goofy, joyous sense of fun rarely seen in movies – the same feeling we had when we first saw Star Wars, and which The Force Awakens does indeed manage to capture. Or re-capture, seeing how it's the seventh movie in this series.

Yes, the plot is very much a re-write of Star Wars (I prefer the original Star Wars rather than merely A New Hope), with the valiant heroes fighting to escape the clutches of the Empire…I mean the First Order…as they seek to delver the vital secret plans…I mean map…to the good guys and also defeat the Death Star…I mean Starkiller Base. If this movie had only been a re-hash of the original, it would be a dreadful failure. But somehow, J.J. Abrams adds enough of his own spin to the story to make it seem fresh and original. That's been his forte, of course, as he is also seen as the director who did the same thing with Star Trek. But the reason why it works is because he does indeed give some new, interesting characters for us to root for. The nostalgia factor is a big draw for this movie, and when I watched the movie in the theater, the audience applauded every time a familiar old face reappeared (Han and Chewbacca, Princess Leia, R2-D2, C-3PO, and of course Luke Skywalker). But the old characters are just there to help us ease into the story of a newly awakened Jedi, Rey. I'm overjoyed to see her enter this story, because she's fresh and new – and she's not a clone of Luke or Anakin Skywalker written as a girl. She's the real star of this new story, and she successfully steals every scene she's in. That's good, because she's not overpowered by the legendary Han Solo, even when she's co-piloting the Millenium Falcon right next to him. Female heroic leads are so scarce in the movies that many reviews of The Force Awakens have compared Rey to the protagonist in The Hunger Games. Bah, humbug. That is an insult to the character of Rey, who is far more original and fresh than Katniss Everdeen. For starters, she isn't a sex object cast as a heroine. She's plucky, resourceful, gutsy – and a joy to watch. It's an obvious and intentional breaking of stereotype when she breaks away from Finn as he tries to get her out of danger, exclaiming "STOP taking my hand! I can run by myself!" So what if it's obvious: it's something adventure movies have needed for a long time. Along with Clarice Starling and Ripley, Rey is a rare female adventurer who doesn't seem like she was written for a guy role. I like her and I definitely hope she has a lot of screen time in the next movie.

Likewise with Finn, the stormtrooper who decides being a slave for the Empire…I mean the First Order…isn't for him. He's as naive as Luke Skywalker was in Star Wars, and he still has some growing up to do…but by the time of the final battle in The Force Awakens, he's risen to the point where he can stand his own ground. And yes, he has a crush on Rey. Good. At this point it seems as though these two deserve one another. If they end up falling in love then I'll be rooting for them all the way.

And as the other major new character, Kylo Ren? Fans are calling him whiny and petty, nowhere near the level of epic villainy we saw in Darth Vader. Thinking this over, I think this is also intentional. He may have the powers of a Sith, but this character also has some growing up to do, emotionally as well as physically (meaning, becoming a full Sith Lord). He could very well become the epic villain fans want him to be, but at this stage he isn't one yet. This is likely the intent of the story. At one point we even see stormtroopers standing away from his rage, and you can just tell they're whispering to each other, "Uh-oh, boss is having one of his bad days again."

I enjoyed these characters so much, the actual story of the movie seemed to be a backdrop to the point where I was far more interested in the final lightsaber battle than with the "epic" battle to destroy Starkiller Base. This is probably because in this case, we've seen it before. In one respect, though, I'll give further credit to J.J. Abrams for having the deft touch to handle awesome special effects in the right way. In today's Hollywood it's easy for a studio to pump millions of dollars into ultra-realistic and awe inspiring special effects…but all too often those special effects simply overwhelm us, rather than delight us. That's why I'm not interested at all in the Independence Day sequel coming to theaters this summer, as the original Independence Day was a textbook example of the dumb Hollywood blockbuster: blow up lots of stuff, and that's about it. The single shot in The Force Awakens of X-Wing fighters soaring across the surface of a seashore, leaving trails of mist in their wake, has far more originality than fifty separate gigantic Hollywood explosions. That speaks more of an eye for good movie making, rather than simply overwhelming the audience with special effects. The final lightsaber duel is vastly different from George Lucas' saber battles. It takes place in the dark, in the snow, and we see, hear, and even feel the awesome power of these clashing weapons more than ever before: the searing energy, the burning and crashing of falling trees and other surroundings, and especially the wounds and exertion inflicted by these combatants. I might even rank this as the best lightsaber duel of all, with the battle between Luke and Vader in The Empire Strikes Back next, followed by possibly the the best moment of The Phantom Menace, when Darth Maul took on two Jedi at once.

On the other hand, my biggest disappointment is with the way we don't really care that, during the course of this movie, several planets are destroyed and billions of lives lost. It happens, and then we immediately lose interest in it as we prepare for the remake of the final battle to destroy the Death Star. This is definitely a flaw in the writing, and I'm not going to say I forgive the writers (Lawrence Kasdan and J.J. Abrams) for this. However, they've given us so many good aspects to this movie that I'll count myself as a fan and gladly line up for the next movie when it premieres.

I was ten years old when Star Wars premiered in 1977. But that was thirty-nine years ago, and a lot has changed since then. Movies have striven to capture the magic that caught the world by surprise when the first movie premiered…and sometimes, they've succeeded in doing so. Even George Lucas was never able to re-create that original feeling when he gave us those dreadful prequels. They were interesting and enjoyable science fiction movies, but they didn't have that rare quality we saw with Star Wars and The Empire Strikes Back, the rare spell that can capture the fancy and imagination of a young child and maybe change his (or her) life forever. That happened with Star Wars, Superman, Raiders of the Lost Ark, E.T., and even later with The Lord of the Rings, Harry Potter, The Dark Knight, the Sam Raimi Spider-Man and Spider-Man 2, and even with The Avengers and Guardians of the Galaxy. All of these later movies took their inspiration from Star Wars. And with The Force Awakens, the circle is now complete. As it began with Star Wars, so it has returned. The magic is back.