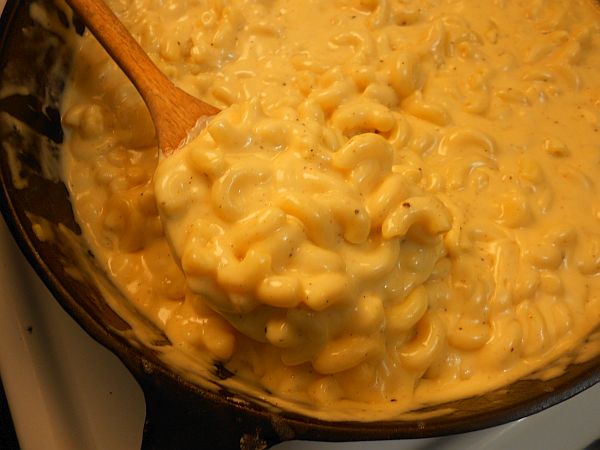 The golden rule for a roux is equal parts oil and flour, and that's why we're using 4 tablespoons of butter and 1/4 cup of flour. Meanwhile, the rule for adding milk to a cheese roux is supposedly "eight times the amount of the roux." Since this recipe uses a roux that's about 1/4 cup in volume (1/4 cup butter plus 1/4 cup flour), eight times the amount for milk would equal two cups of milk. If we were using half a cup of flour and a full stick (1/2 cup) of butter, we would need to double this to four cups of milk.

Pans needed: Stock pot or dutch oven for boiling the macaroni. A 10-inch cast iron skillet for preparing the cheese sauce. A whisk is essential for keeping the roux and the cheese sauce from becoming too thick.

Prepare macaroni in a stock pot. Drain the macaroni into a colander, and leave it in the colander to rest while the cheese sauce is prepared.

Melt the butter in a cast iron skillet over low-to-medium heat, in order to prevent the butter from burning. Whisk the flour into the butter to make a roux.

Add 2 1/4 cups whole milk to the roux, and stir into a creamy sauce. Be sure to constantly and briskly stir the sauce with a whisk. It's important to use a whisk for preparing the roux, because that helps to wipe out any lumps that form with the sauce.

Heat the milk to at least 130 to 150 degrees Fahrenheit, which is the temperature for melting cheese, depending on how hard the cheese is. Soft melting cheese like mozzarella melts at 130 degrees, while harder cheese such as romano melt at 150 degrees or more. Once the milk is steaming and hot enough to melt the cheese, add the cheese, and stir it constantly to ensure it melts and turns into a good, creamy cheese sauce. Add salt, pepper, a little ground mustard, and some smoked paprika for flavor. Then, it's time to add the cooked macaroni. Stir it into the cheese sauce, and we have a mac and cheese that any kid will enjoy..even kids who've only eaten mac and cheese from a box their whole lives.