A truly unique cast iron skillet. There have been two folks on the Cast Iron Cooking Facebook group who were fortunate enough to score this pan, and I was not expecting to find one myself: a gate-marked number-9 sized 19th century pan, with one single left-handed pour spout and a wonderfully detailed handle. The first time this was posted here on the Facebook group, I drooled with envy: it's a lovely pan! Then, on September 8, 2013, I made a trek to the famous Brimfield Antique Show in Western Massachusetts in search of cast iron. And there was cast iron to be had there…including one vendor with an impressive pile of uncleaned iron, with several big pots and quite a few pans. Most of them were rusty and crusty, and the pans were various items from the 20th century - unmarked Wagner, made-in-Taiwan skillet, unmarked Lodge, and so on. But in the midst of this, I found two amazing discoveries including this skillet. Also at that same stall was a Griswold #9 Tite-Top lid, sitting on top of a big gate-marked pot. Because it was on a mismatched pot, I didn't mind taking only the lid, and negotiating a price for the two pieces. The guy charged me $25 for the two, with "most of it being for the lid" because (again) it was a Griswold. And in a wonderful coincidence, the Griswold lid fit PERFECTLY on the gate-marked pan! Now THIS was a score I simply could not pass up! 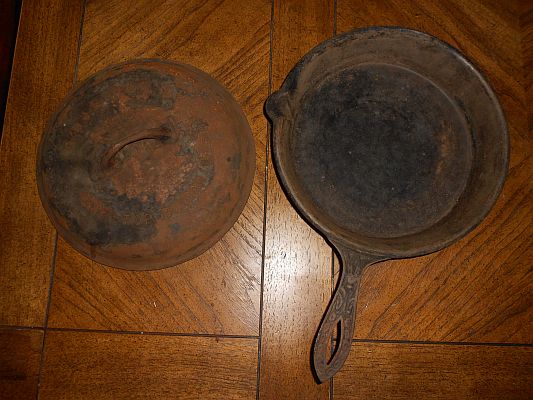 Cleaning this pan up, however, nearly broke my heart. After five days in the lye bath, I was saddened to discover this pan had not one, but TWO cracks. 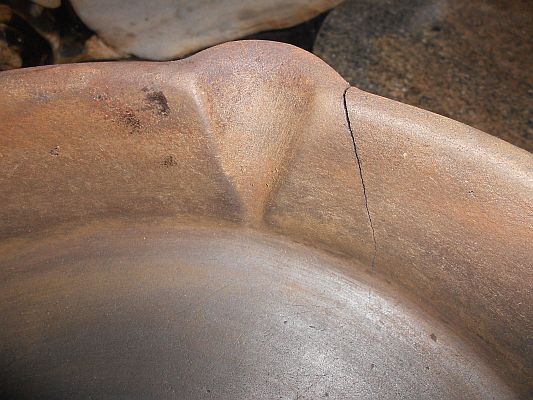 Upon consideration, I decided this pan was unique enough to consider having it repaired. In early October, I took it to a guy in Waltham, Massachusetts who does contract industrial welding work, and showed him this, plus a second gate-marked pan that also had a substantial crack. He took them and told me they'd be ready by Wednesday, though he was delayed a day and didn't finish the job until Thursday. When I picked them up, I decided it was worth the wait. He used nickel welds on the cracks, and the only signs that there were any cracks at all were the grinding marks from grinding down the weld. The metal blends in well with the surface of the iron. I promised the guy I'd give him a plug on this group, and here it is: bobroywelding.com/ He does industrial welding and machinery repair, and he wasn't familiar with antiques when I showed him the pans. He'd never heard of the electrolysis method of rust removal, for instance, and was fascinated when I explained it. He mentioned that his co-workers had asked him about the pans: "What's he going to do, hang them on his wall?" "I think he's gonna use 'em." Yes, that's what I'm going to do, all right. 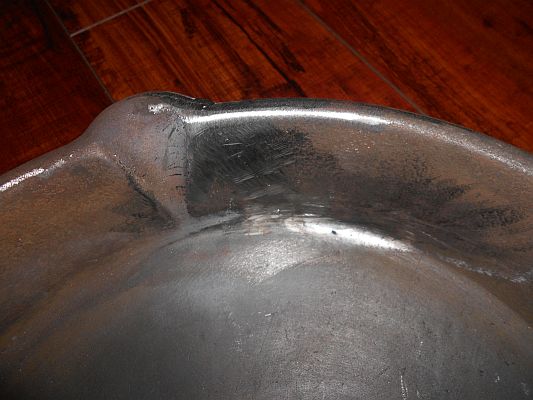 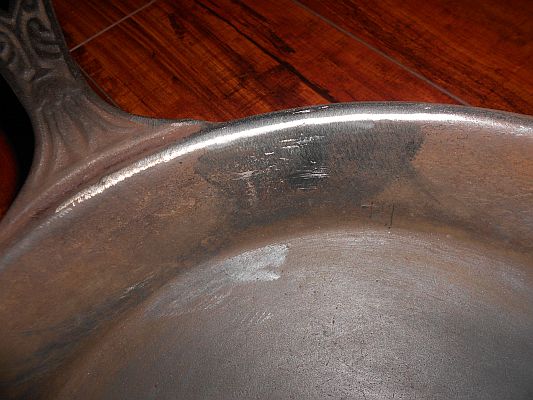 November 12, 2013: And now the pan is out of electrolysis and cleaned up, ready for seasoning. This was easy the thinnest and lightest cast iron pan I'd ever seen (until I was shown an even thinner lid at the 2013 National Dutch Oven Gathering). It's taken a lot of abuse, and there are scratches and a couple of pits in the cooking surface that look as though this pan took some whacks. The pan is heavier than a steel pan of the same size, though, and I did successfully test it with a magnet to ensure it was actual iron. Now, it's ready for seasoning. 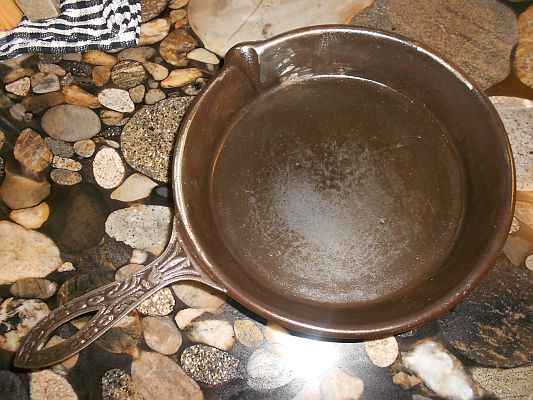