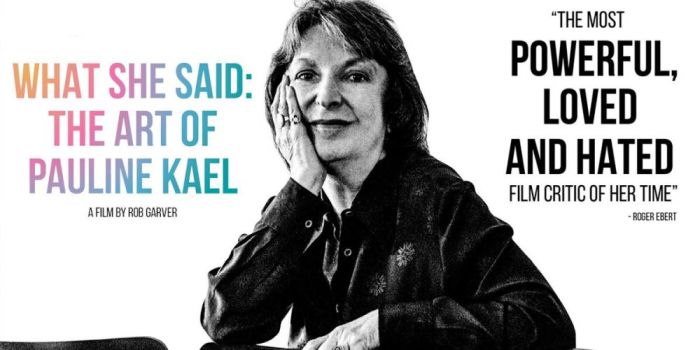 During the late 1980s through the 1990s, I was heavily into a film geek, or amateur movie buff, phase. My enjoyment of cooking today rivals how I was into movies thirty years ago. (Egad, has it been thirty years?) And as any film fan knows, in order to be a film snob you have to experience the writings of Pauline Kael. It would be too easy to simply dismiss her with the statement, "I hated her because she hated this movie that I really loved!" And yes, she blasted a number of my favorite films, too. Stanley Kubrick's films are among my all-time favorites, with 2001: A Space Odyssey topping them all, and Kael trashed it. She described it as "a monumentally unimaginative movie." She had equally harsh words to say about A Clockwork Orange – and yet, she also pointed out some aspects of these movies that certainly do have a logical point. She described 2001 as a huge ego trip for Stanley Kubrick, even to the point where he shot a home movie of his daughter, and showed it in Heywood Floyd's "Picturephone" call to his daughter from the Hilton space station. As much as I enjoy 2001, I have to admit her obviously coached dialogue and unconvincing acting are a weak moment. (Yes, I know she was barely three or four years old in that scene.) Likewise, Kael also described the extended scenes of attacking and stripping women during of "A Clockwork Orange" as poor exploitation, simply because it takes so long for the droogs to strip the girls naked; and once again I had to admit she had a point. I'm still not sure I agree with her point, but it was a point nonetheless.

Kael did write some reviews praising movies that also were among my favorites, such as her incisive positive reviews of Yellow Submarine, Jaws, Taxi Driver and even E.T.: The Extra-Terrestrial. Yes, she enjoyed E.T., even after being bored out of her mind with Raiders of the Lost Ark. But I kept reading Kael not so much for her opinions of movies, but for her energetic, conversational writing style. She wrote marvelous prose, and her writing really gave the impression she was speaking from the heart, using her reviews to express her personal feelings and emotions rather than giving a cold, analytical, scene-by-scene analysis of whichever movie she was reviewing. She truly opened my eyes to the world of film, not because she loved Jaws but hated Shoah; but because she could describe the movies in this manner, seen here where she sums up why movie directors insist on producing these "passion projects I've wanted to make my whole life:"

"This form of gigantism is not to be confused with the producer-initiated or studio-initiated big-budget pictures (Cleopatra, Doctor Doolittle, The Towering Inferno [or Terminator 2 or Jurassic Park if I might add], and so on). The artist-initated epic is an obsessive testing of possibilities, and often it comes out of an overwhelming desire to express what an artist thinks are the unconscious needs of the public. It comes, too, from a conviction, or a hope, that if you give the popular audiences the greatest you have in you they will respond. The moviemaker has an idealistic belief that no matter how corrupted mass taste is, people still retain the capacity to receive a vision. These epics try to vault over the film industry and go directly to the public." ("Hail, Folly!" – review of Bernardo Bertoucci's 1900 from Kael's When The Lights Go Down.)

This was why I had to watch the 2020 documentary What She Said, which takes a light-hearted look at Kael's life and especially her opinions of movies. (She rarely used the word "film" to describe movies, as she felt the term was too elitist.) And while this does a good job touching on several of the major moments of her life, including her most infamous moments when she panned The Sound of Music, when she published Raising Kane, when she eviscerated David Lean to the point where he stopped making movies for 15 years, and when she praised Last Tango In Paris and Nashville, and other moments; what we really want to see is a more insightful, or inciteful, look below the surface and learn more about Kael herself. And we don't really see much of that. Archival footage of her 1950s radio broadcasts, and many clips from TV interviews, are interspersed throughout the film, in which she fearlessly expresses her opinions (as she did for her entire life); but once never really gets the sense they've learned something new about her, something personal that we've never known before about her. Her daughter Gina was closely involved with the film's production, and maybe that's why the film doesn't expose any real skeletons from her closet. I'm not asking for the movie to reveal some taboo, shocking tabloid secret that may have been covered up. Rather, like her own (negative) review of Lawrence of Arabia, when it was over I didn't feel like I knew Pauline Kael any more than when the film started.

On the other hand, what we do see is entertaining, light-hearted, interesting, and very appealing. She had many fans and many people who considered themselves her enemies, and the film doesn't shy away from presenting their (brief) commentary, either. Then again, that was obviously the intent of this movie, to tell us that Pauline Kael was controversial. It spells this out continuously, but it doesn't do a great job in really letting us feel why she was that way. I suppose this is inevitable, because she passed on in 2001 (no, I don't even consider that to be a meaningful coincidence; she died due to complications of having Parkinson's disease), and so this film is built entirely on prerecorded interviews and excerpts from her writing. I think I felt the same way when I saw Imagine, the John Lennon documentary that was compiled in the same way with archival footage – and which was also done with the participation and permission of Yoko Ono. Neither of these movies are revealing; they're almost entirely surface level and even shallow. But they're also entertaining and fun to watch.

I do have to mention one personal moment regarding Pauline Kael. During the period before she died, I worked at a call center that dispatched emergency services from senior citizens. One of the subscribers to our service was, in fact, Pauline Kael. One of the requirements of our subscribers was that they send test their emergency equipment once per month. By coincidence, I happened to receive a test call from Pauline Kael, as she tested her monthly service. After saying that her equipment was working correctly, I did have to take a moment to tell her, "I hope you don't mind my saying I've read your books and I enjoyed them very much." Her reply was a simple "Thank you." But I'm glad I had the opportunity to say hello to Pauline Kael.