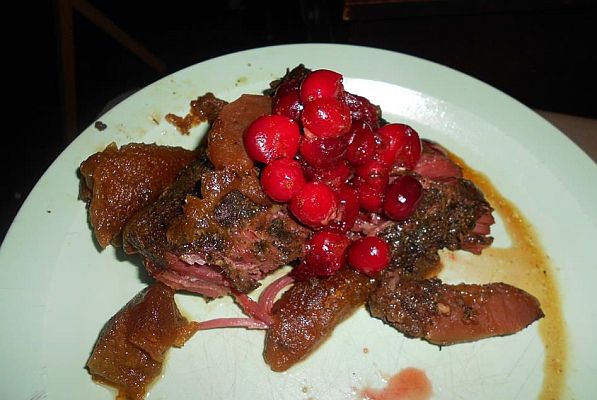 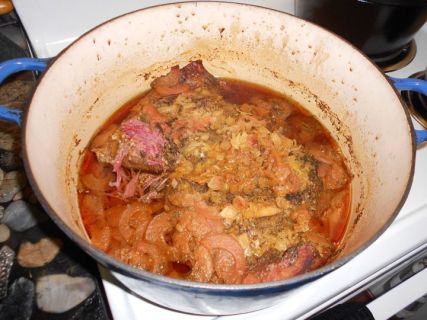 December 20, 2012: And at last, that time is upon us once again – the holiday weekend! After all the madness of rushing around, we can settle down at last and get to some special holiday cooking. This pot is something of a Yuletide present to myself as well as my co-workers, because I'm testing a recipe of my own design here. It's hardly earth-shattering or complex, because anyone who makes slow-cooked beef brisket will tell you that this is one of the easiest, and tastiest, dishes anyone could make – especially in a cast iron dutch oven. All you do is rinse off a slab of beef, place it in the pot, cover it with spices, and cook it for several hours in the oven. Still, I hope this combination turns out well: I simply call it "Yuletide Corned Beef." This came from my watching that video of PBS' cooking show, A Taste of History earlier this week, and getting the urge to try a saddle of venison recipe. Since I can't afford a decent-sized chunk of venison, I went out looking for a deal on a beef brisket…and there were none to be had in my area. Evidently, beef isn't a popular Christmas dish at most supermarkets; instead, they had ham and turkey sales as far as the eye could see. However, I did come across a decent-priced corned beef brisket…and that got me to wondering what could be done with it. So, I decided to give it a shot. This is corned beef done in in a manner that's quite different (I hope) from St. Patrick's Day corned beef: it's made with many of the usual holiday spices, including cloves and nutmeg, along with parsley, ground mustard, black pepper…and for a braising liquid, I'm using orange juice. (That's why I'm cooking it in an enameled Le Creuset pot instead of a bare iron pot; the acidity of the orange juice calls for it.) In addition, I used my apple-peeler-corer-slicer-thingie to prepare a couple of apples and spread the slices on top. I figure with several hours of slow cooking, the apples will soften or dissolve into the mixture. With all of this, I'll be making cranberry sauce to serve on top of it. I hope it works. It sounds like a good mixture in my mind, but I'll find out tomorrow morning after it's been cooking in the oven at a low temperature all night.

Also – this dish does not include cabbage!

If you have the time and the resources, I strongly recommend that you try making your own home brined corned beef. It will outshine any corned beef brisket purchased at the supermarket.

Preheat oven to 265 degrees F. (If you're using a crock pot, set it on low.) If the corned beef came with a packet of seasoning and spices, you can discard it or save it for another meal; you won't need it here. Rinse the corned beef brisket, and place in an enameled cast iron dutch oven. (The acidity of the orange juice can affect the seasoning in a bare iron pot, which is why an enameled cooking pot should be used.) Add spices as listed: parsley, mustard, garlic, thyme, pepper, cloves, nutmeg. Spread diced onion over the brisket, add butter on top. Pour orange juice into the pot. Add sliced apples on top of the onions. Cover the pot and place in the preheated oven. Cook for 8 hours. (The meat will be tender enough to pull apart with a fork.) Serve beef with Cranberry Sauce topping. Mashed potatoes make a good accompanying side dish.

December 21, 2012: The corned beef went over very well at work – people gobbled it right down! Not many of them tried it with the cranberry sauce, though. I think it was just because it was something new – after all, cranberry sauce is supposed to be a turkey dish. How dare someone try it on beef? Well, I took a serving of the beef and tried it myself with the cranberry sauce…and personally, I thought it was terrific. I’m not just saying that because I cooked it, either.

I feel it turned out well enough for me to declare the recipe satisfactory. Hopefully someone will try it…and if you do, I hope you like it.