< Here's a look at what the finished ''dulce de leche'' looks and sounds like:

> Click your mouse on this picture for a look at what the finished ''dulce de leche'' looks and sounds like: 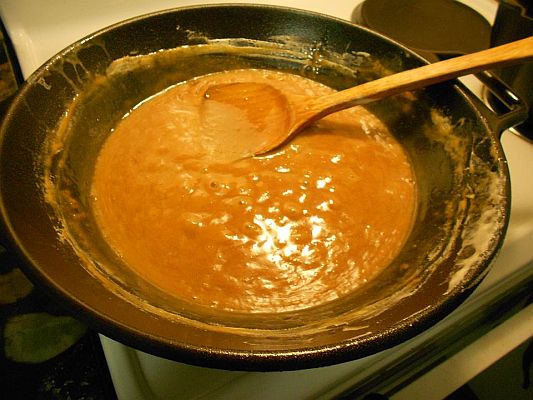 I live in a Brazilian neighborhood, and that has introduced me to a lot of interesting foods and tastes. I've managed to befriend a few of my neighbors, especially the ones who have kids. In 2013, one of my neighbors' kids asked me to make her a birthday cake with her favorite flavor: doce de leite (that's Portugese; the Spanish term is dulce de leche for "sweetness of milk"). This is a Latin American sweet that is phenomenally popular, because it's both delicious and easy to make. It has a consistency and flavor similar to caramel, except there's no caramel in it. In its basic form, dulce de leche is nothing more than milk and sugar, heated stirred together slowly for a long time until it congeals into a thick, light brown, sugary taffy substance.

The popular – and easier – way to make dulce de leche is to take a can of sweetened condensed milk, place the unopened can in a pot of water, and boil it for several hours without opening the can. (Boil it in a large stock pot for about three hours; or slow-cook it in a crock pot for eight hours.) This causes the milk to congeal – although there's a risk that the pressurized can could explode if the water boils off. Using a crock pot or slow cooker reduces this risk; however, doing it the harder way, with milk in an open pot, is actually the faster method of producing this wonderful sweet. You also end up with a greater quantity of the stuff.

Pans needed: The basic recipe for dulce de leche is nothing more than a half gallon of milk and four cups of sugar, stirred together over heat. Milk is notorious for burning, of course; and as I was thinking about how to approach this, I considered the best ways to ensure the milk would be evenly cooked (and stirred) without developing a crust of burned milk on the bottom of the pan. Then, I realized the same procedure used for making scotch broth (which also burns easily) could be applied here: use a round-bottomed pan rather than a flat bottom, so that you can stir it easily and constantly. That's why Scotch bowls are round in shape, to prevent the barley used in scotch broth from burning. So, I decided to use a round bottomed pan for this. Since I don't have a Scotch bowl, I settled for the next best thing: my Lodge cast iron wok. That also allowed for the use of a wok turner, shaped especially to fit a wok, to stir it. 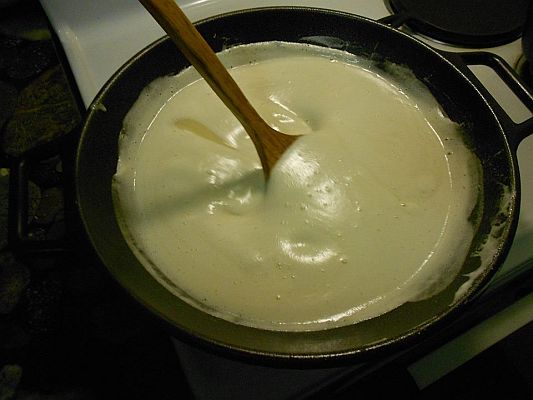 6:50 PM: Pour milk, baking soda, vanilla, and sugar into big wok, begin heating slowly. The baking soda gives a layer of foam on the surface of the liquid; this is correct.

7:35 PM: It took 45 minutes for the milk to come to a boil, but it boiled without burning. Stage 2: stirring to thicken it.

9:10 PM: 2 hours and 15 minutes later…When it had reduced and thickened to the point where the stirring ladle gave a "slurp" sound every time I stirred it, I decided it was thick enough to put into a bowl. It can be served hot and poured over ice cream, cake, pie, or other desserts; or, you can keep it in the refrigerator for a long time. Dulce de leche will last at least two weeks in a covered container, in the fridge.

Click your mouse on this picture for a look at what the finished dulce de leche looks and sounds like: 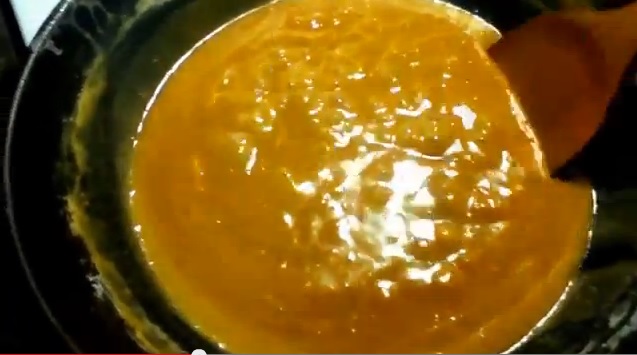 A full video on the making of this dish can be seen on YouTube: Dulce de Leche