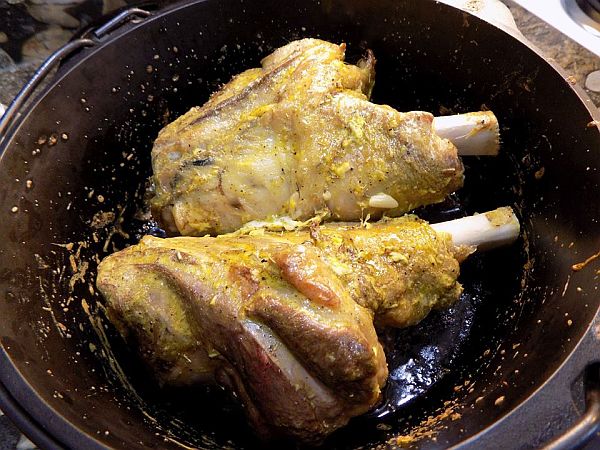 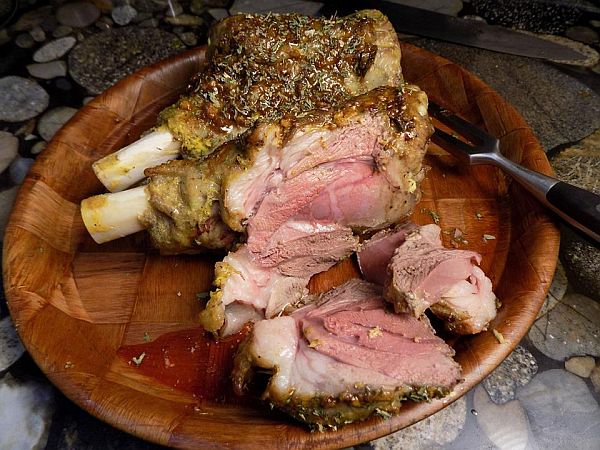 This recipe was titled "Haedus in Alio" from Libro de arte coquinaria, and it was translated into modern English in the modern cookbook Pleyn Delit, which was pubished in 1976 and updated in 1996. Here is the original recipe:

By "kid" they mean "baby goat." The recipe substituted a leg of lamb instead, because this much easier to get.And here is what was used to make this dish in a modern day kitchen:

Pans needed: Cast iron dutch oven. Using a cast iron pot, rather than a roasting pan, helps to deliver even heating to all sides of the meat, in a manner similar to being roasted on a spit. A probe thermometer for measuring the temperature as the meat cooks – they definitely did not have something like this in the Middle Ages! However, we have them now, and we can certainly take advantage of this.

Lemon juice is used here as a substitute for verjuice, though white wine vinegar can also be used.

Crush a clove of garlic in olive oil, and brush this over the lamb. Put lamb into the preheated pot, and into the oven, and turn heat down to 325 degrees F.