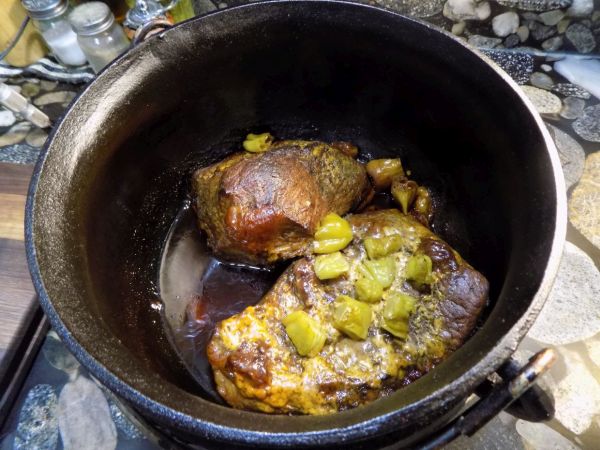 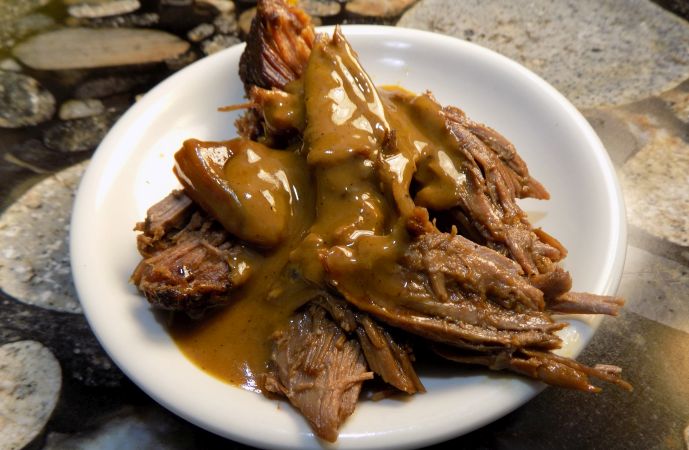 This is a recipe that became popular over the past few years, and it usually consists of putting a roast into a crock pot, dumping packets of au jus mix and ranch dressing mix in it, and adding pepperoncini peppers. Slow cook and you have a great pot roast. This is true, but…there's nothing wrong with soup and gravy packets; I just think homemade is better. Especially when the roast beef is seared in a cast iron dutch oven and cooked overnight at 250 degrees Fahrenheit. Then, after mixing in the au jus with the beef, we make a beef gravy that takes it to another level. "Au jus," which means "with juice," is a fancy word for "beef drippings in the pot." I think the reason why we only use this with beef is because if we tried it with chicken, we might use the word in "coq au vin" and end up with…um…coq jus? I don't think I'll elaborate on that.

Just about every home has a crock pot, and it's been said that if you have a crock pot, you don't eed a dutch oven. After all, a slow cooker is about as easy a kitchen tool as you can have, and slow cooked food is wonderful and easy to make. This is just one of the reasons why you do indeed need a cast iron dutch oven – because a dutch oven can be used for many other uses, in addition to being an excellent slow cooker.

Pans needed: A large cast iron dutch oven, 4 quarts or more in size. One separate bowl for mixing the sauce. A metal whisk, for preparing the gravy.

Every recipe on the Web for "Mississippi pot roast" says to use pepperonici peppers. Be sure these are the green picked peppers. What they don't tell you is: these are actually called friggitello sweet chili peppers. They are labeled "peperoncini" in the United States, but this is not their given name in Europe. In Europe, peperocini is the name given to Italian hot peppers – and those are not the peppers we'll be using here! 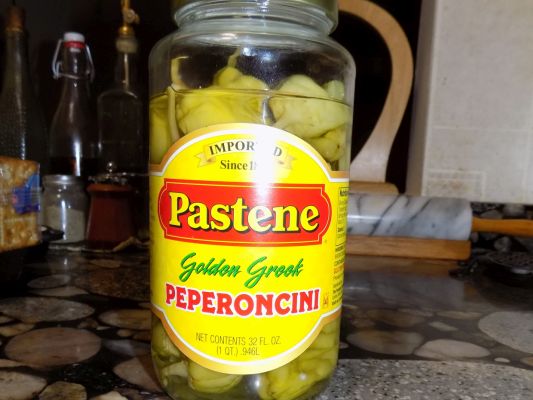 The night before preparing this pot roast, prepare the roast for cooking. Pat the roast dry with paper towels. Brush Worcestershire sauce over the entire surface of the roast, top and bottom. Sprinkle or grind black pepper over the entire roast, then coat the roast with kosher salt. Wrap the roast tightly in plastic wrap, and place in the refrigerator. Marinate 12 to 24 hours.

The next day, preheat the oven to 250 degrees Fahrenheit. Unwrap the roast. Mix the sauce ingredients together in a small bowl or dish: mayonnaise, vinegar, dried dill, paprika.

Place the cast iron dutch oven on the stovetop burner, and heat it on medium for 10 minutes. This will make the cast iron pot hot enough to sear the roast. Add a small amount of cooking oil to the hot pot (canola, peanut oil, stir fry oil, your choice), and let the oil heat for 1 minute.

Place the roast into the hot pot, and sear all sides to form a crust. This will take less than five minutes. Turn the roast as it sears, so all sides of the roast are browned.

Cover the pot, and place it in the oven. Let it slow cook at 250 degrees for eight hours.

After eight hours, remove the pot from the oven and move the roast to a large bowl or dish. Using two forks, shred the roast. Mix some of the pan juices (au jus) from the pot into the meat. Remove the cooked peppers.

Now, the pan juices can be used to prepare a beef gravy for the roast. Heat the pan juices on low-to-medium until they begin to bubble. Add 1 tablespoon of flour to the pan drippings. Use a whisk to mix it all together into a roux. Add more flour, a little at a time, and keep stirring. The roux will become very thick, and it will become a mass of lumps and pieces of thick flour-grease mixture. This is correct: the roux must be this thick, so it can then be thinned out into a gravy without lumps!

Add 1 to 2 tablespoons of beef broth to the cast iron pot. Stir it all around at medium-low heat and mix it all together. The roux will begin to change from lumps into thick goo. Add more broth, and keep stirring.

Add more broth and keep stirring, again and again and again. Keep on adding broth and stirring, until it becomes a good, thick gravy. Add salt and pepper to taste. You can use a turkey baster to move the gravy into a gravy boat, or carefully pour it out of the pan into the serving vessel.

Serve the hot gravy along with your roast beef.