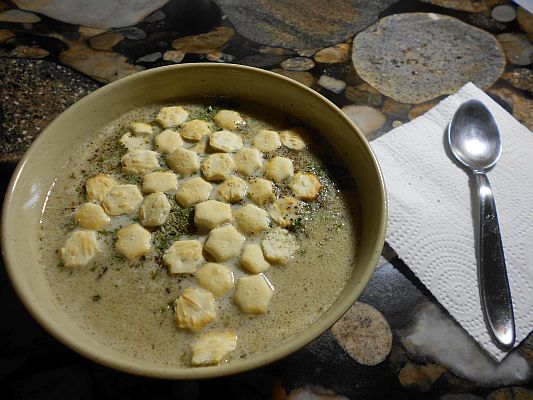 If you're interested in trying the cuisine here in New England, there are several dishes you have to try, including your Boston baked beans and your lobster – and, of course, there's your world famous New England clam chowda. There's a reason why you don't hear about Baltimore chowda or even New York chowda. That's because here in New England, you know how to make your chowda, and we're proud to show off this New England legacy to everyone who visits us. This is a simple recipe and it only has a few ingredients. It's basically clams stewed wth potatoes and spices – but that's why it tastes so good. A lot of people prefer a thicker chowder, one they need to eat with a spoon; but I've always loved a chowder where you can drink the broth like a soup, after eating the tasty parts with a spoon. You can thicken this with flour if you want, but I think it's fine as it is. Also, one more thing: here in New England, you never pronounce it "chowder." If you want the authentic stuff, then it's definitely CHOWDA.

Pans Needed: 1 large pot for steaming clams and boiling the chowda…preferably a cast iron pot of at least 6 quart size.

While you can certainly use canned clams, purists will tell you the best clam chowda is always made with fresh clams. It takes about three pounds of shelled clams to produce a pound of unshelled clams. Wash off the clams and remove as much sand and grit as possible. You only need to boil a little more than four cups of water, which will make all the broth uses in your chowda. You don't need to cover the clams completely, because we'll be steaming them open in the boiling water. Fresh clams only need to be steamed for fifteen minutes. The clams will open up, and that's how you can tell they're ready to be used in the chowda. Strain the clam broth and save it for making the chowda. Remove clams from shells. Dice and mince the clam meat, and save to use in the chowda.

From here, peel and cut a pound of potatoes into cubes, and prepare your other chopped up ingredients: one onion, two stalks of celery, and of course, a half pound of bacon.

Ssear up the bacon in your cast iron pot, until it's crisp and all the fat is rendered out. This will take about ten minutes at the most. Remove and reserve the bacon, so you can add it back into the dish later. Use the bacon grease to sear and caramelize the chopped onion and celery, which only takes about five minutes. Next, add the cubed potatoes, along with half a cup of white wine to give it more flavor.

Once the potatoes begin to soften, add two bay leaves, and a dash of thyme. Add in the clam broth, cover the pot, and cook the potatoes for twenty minutes.

Once the potatoes are soft and tender, you can now add in the clams, along with a dose of black pepper for flavor, and also white pepper. Bring the chowda down to a simmer, and add cream and butter. You don't want to bring it back to a boil because this would burn the cream. Simmer for ten minutes.

Serve chowder with parsley and bacon.