< * 2 tablespoons bourbon, rum, or a dark or spiced liquor

> * 2 tablespoons bourbon, rum, or a dark or spiced liquor (optional) 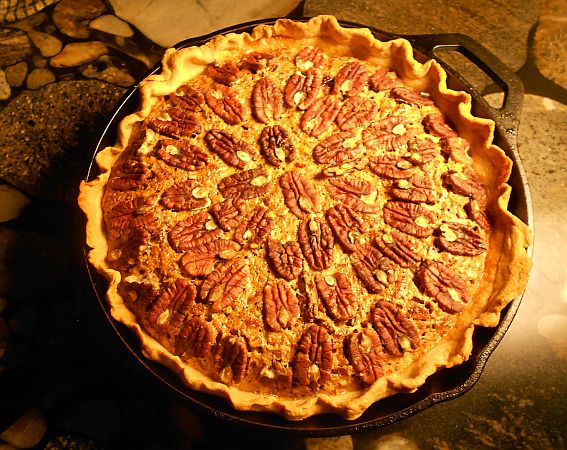 Pans needed: A 9-inch or 10-inch cast iron skillet. Most recipes call for the use of a pie plate made of glass or even aluminum foil, but a cast iron skillet will cook the pie crust more thoroughly – especially on the bottom. It also gives a faster baking time! If you read most recipes for pecan pie, they say to bake the pie for 55 minutes, an hour or even more. When using a cast iron skillet as your pie pan, you can reduce the baking time to 50 minutes: 5 minutes to form a skin on top of the pie, then 45 minutes to thoroughly bake the pie.

Many recipes for pie crust use cold water when preparing the dough, but this recipe uses vodka rather than water. The reason for this is because water mixes with the flour to form gluten, and this can cause the dough to become very tough or even crunchy. We don't want a crunchy crust with this pie! Using a tasteless alcohol, such as vodka, prevents the dough from forming gluten, and gives you a firm but still flaky crust.

To prepare the dough: in a medium sized bowl, whisk together flour, salt, and sugar. Add cut butter pieces to the bowl. Begin mixing it all together, until the butter is blended in with small pebble-sized chunks throughout the mixture. Beat egg in a separate bowl or cup, add it to the mixture, and stir it all together. Add 1/4 cup chilled vodka, and mix it all together into a dough.

Form the dough into a disk, wrap it in plastic wrap, and refrigerate the dough at least 1 hour.

When the dough is ready, grease the inside of a cast iron skillet with vegetable shortening. You'll be able to roll it into a circular pie shell, to lay into your pan. (You're not using a glass pie plate, are you?

In a 2-quart saucepan, boil sugar, corn syrup, and molasses together for 2 to 3 minutes; set aside to cool slightly. Melt 1 stick of butter, to add to the batter in a little while.

In a large bowl, beat the eggs lightly and very slowly pour the syrup mixture into the eggs, stirring constantly.

Stir in butter, vanilla, and crushed pecans, and pour into crust.

Bake at 350° Fahrenheit oven for five minutes. This will allow the top of the pie to congeal and form a layer. Slowly remove the pie from the oven, but be careful – the pie filling is still liquid! However, the top of the pie will be solid enough to lay the whole pecan halves on top, in any pattern or design you like. After arranging the pecans, place the pie back into the oven, and bake at 350 degrees F for another 45 minutes.

When the pie comes out of the oven, the filling will ripple and jiggle – this is correct! The filling has not completely set. You must let the pie rest for at least one hour for the filling to solidify.