< Here's a YouTube video of this wok being used to make popcorn: [http://www.youtube.com/watch?v=d7Y_UT_ZYls Wok Corn]

> : Here's a YouTube video of this wok being used to make popcorn: [http://www.youtube.com/watch?v=d7Y_UT_ZYls Wok Corn - popcorn in a cast iron wok] 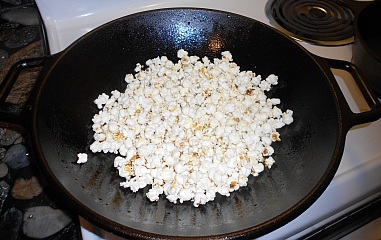 Wow, I can't believe how easy this was – and how FAST! Someone posted a recipe to Amazon's reviews on how to make popcorn in a cast iron wok. I tried it out tonight, and it was done just like that. I heated the wok to high, added the oil, tossed in a kernel…and it popped in ten seconds. I poured in the rest of the popcorn, and it was all done about two minutes after I'd poured in the oil. Nearly every kernel popped. It was so fast, it took me off guard; and some of the popcorn burned because I didn't get it out of the wok fast enough. I'll be ready for it next time, because there will definitely be a next time.

This recipe was originally posted to Amazon.com by J. Gohr "Amazon Junkie".

"I love this wok. Why did I wait so long to buy it? Reading reviews here really helps for hints on how to use it. I have a glass top stove and have been able to get it hot enough by letting it preheat for ten to fifteen minutes. I cook each component of the dish separately and then put them back in the wok to mix together. I love how big it is. BUT the favorite thing I've found to do with my wok is to make popcorn.

"WOK corn is what we are calling it. Right after the first batch was done, I hauled the air popper to the basement to the get rid of pile. Let the wok heat up on high and then put 1/4 cup [canola] oil in. Put one kernel of popcorn in. When it pops pull that out and put in a 1/2 cup of popcorn. Put a lid on. I use a 12" lid I have that will vent out steam. When the popcorn is about halfway done popping (after only 20 to 25 seconds!)turn off the heat. The popcorn will finish popping. The wok does not need to be shaken like usual stove top popcorn. The sloped sides keep the popped kernels from burning."

Only 60 seconds after adding the popcorn seeds to the oil, the popcorn is ready. Pour it out of the wok – fast! It will burn quickly if you leave it in the wok for too long.

If you want to sweeten the popcorn, mix in 1/4 cup of sugar with your popcorn seeds, so that you can pour them both into the hot oil at the same time. You can use either white sugar or brown sugar.

Here's a YouTube video of this wok being used to make popcorn: Wok Corn - popcorn in a cast iron wok

If you don't have a cast iron wok, here's an article on cooking popcorn in a 12-inch cast iron skillet.