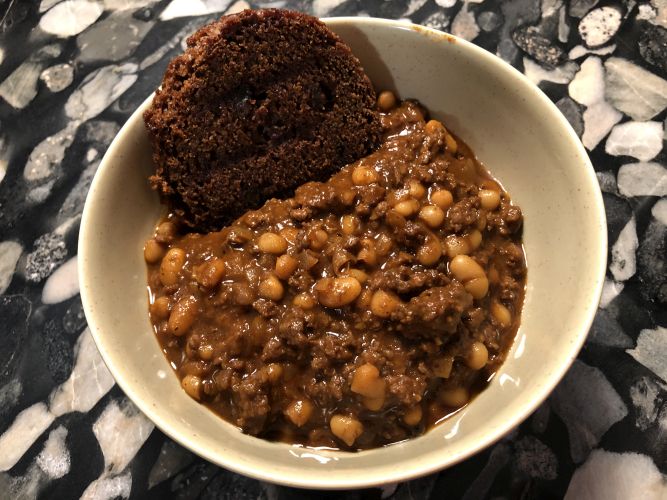 As a born and bred New Englander, I grew up with our world famous Boston Baked Beans. As far as I'm concerned, these are the greatest baked beans in the world, and I'll fight anyone over that! What's more, I'm proud of my recipe for Boston Baked Pork and Beans, in which a large pork shoulder is baked with the beans, cassoulet style, and shredded to produce a pot full of pork and beans like nothing else. However, this recipe came as an idea when I prepared Boston baked beans for a guest who doesn't eat pork. I had a revelation that went something like this: "My guest doesn't eat pork, so I'll make this pot of beans with ground beef instead. But wait a minute…the sauce for these baked beans makes a good barbeque sauce as well, because I've used the sauce to make an Oven Baked BBQ Chicken recipe that was quite successful. What do you get when you combine ground beef, barbeque sauce and beans? You get chili! And thus came the recipe we have here, for a chili made with Boston baked beans. I can't give this a name other than Boston baked chili…even though this chili is simmered on the countertop, rather than baked.

You can buy canned navy beans, or prepare the beans yourself. This requires soaking one pound of dry beans overnight, then boiling them for at least two hours to pre-cook the beans. If you want to prepare this recipe on the same day, canned beans will work fine.

In a large cast iron skillet, brown 2 pounds of ground beef and drain the liquid and extra fat. The ground beef does not have to be fully cooked in the pan, because it's goiong to simmer in the chili for an hour. You only need to cook the beef enough to render the extra fat and liquid. After draining the grease, stir in 2 tablespoons of chili powder and 2 teaspoons cumin. When it's all mixed together, set the skillet full of meat aside, to be added to the chili in a little while.

Add cooking oil to the heated dutch oven. After one minute, add the chopped onions to the pot, and sautee for five minutes until the onions are softened. Mix in and stir together brown sugar and molasses with the onions. The brown sugar will melt and mix with the molasses, forming a thick sauce. Add additional ingredients, and keep stirring as you mix them in: kosher salt, ground pepper, dry mustard, tomato paste, sugar, vinegar, ground cloves. Add the beans and stir everything together.
Add the chili ground beef to the pot, and stir until everything is combined. Cover the pot for about five minutes to bring it all to a boil. Uncover the pot, turn the heat down to medium-low, and simmer for 1 hour to reduce and thicken the chili.

While the chili is simmering, heat up the cast iron skillet once again. Slice Boston Brown Bread into large slices. Melt butter in the skillet, and fry the brown bread slices for about two minutes on each side. 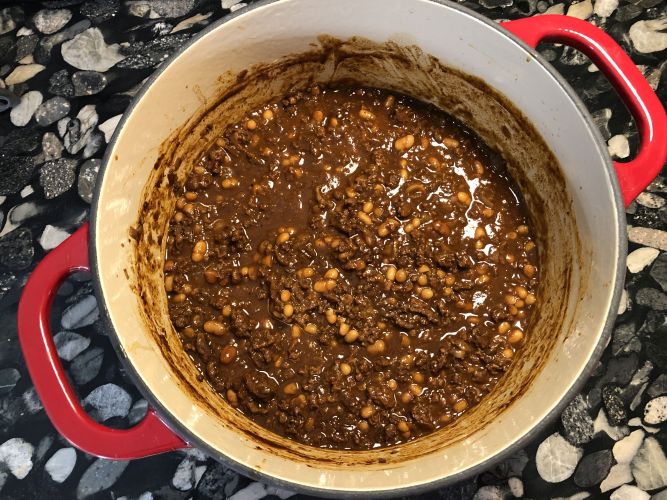