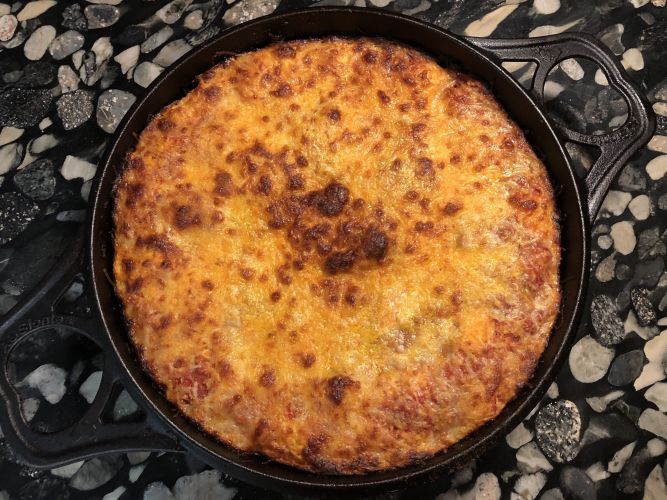 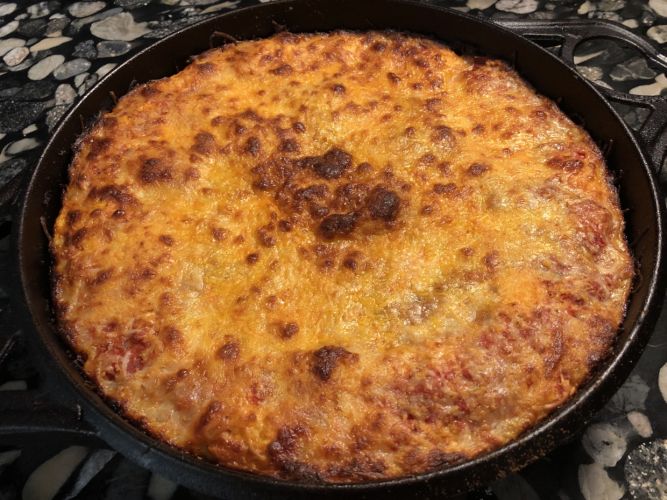 If you're new to making homemade pizza, you should certainly consider making pan pizza in a cast iron skillet. It should be said that this is not the same as delivery pizza, Neapolitan pizza, Chicago deep dish pizza, or New York style pizza. However, it should also be said that this pizza is far easier to prepare than classic pizza baked on a pizza stone (or steel), and it's practically foolproof. You can add your favorite toppings, of course; or just stick with a simple and easy cheese pizza. The end result here will give a thick pizza that's easy to chew. There's also no crust around the edge, as the toppings are entirely contained within the pan. This means people will be more likely to eat the entire pizza, without tossing out the crust.

I strongly recommend using a scale to weigh the flour and water! It's important to have the right ratio of flour to water, to ensure the dough isn't too wet or too dry.

These measurements will produce one pizza. Use this amount for each pizza, so for two pizzas double the ingredients.

In a large bowl, use a scale and measure 11 ounces of all-purpose flour. (Bread flour also works fine here.) Add 1 teaspoon of ordinary table salt, and 1 teaspoon of yeast. Use a whisk to mix together the dry ingredients.

Make sure the water isn't too hot or too cold! If it isn't the right temperature, the yeast either will not bloom; or it will be killed if the water is too hot. add 8 ounces of lukewarm water (105 to 110 degrees Fahrenheit) to the bowl. Begin mixing the ingredients together with a large spoon or spatula. When it begins to come together into a big mass, set the spoon aside and knead the dough in the bowl, using your hand. The dough only needs to be kneaded for about a minute or so, until it has formed into a dough and doesn't have a lot of extra bits of flour left over.

Add about 2 tablespoons extra-virgin olive oil to a fresh bowl, and cover the surface of the bowl. Place the dough into the bowl, then flip it over so that the dough is completely coated with olive oil. Cover the bowl with plastic wrap, or simply place a large dish or metal bowl over the top. Let the dough rise for two hours.

After two hours, take out a large 12-inch cast iron skillet. Add more olive oil to the pan, and use a basting brush to coat the entire surface of the pan with the oil, including the sides. When the pan is ready, dump the dough out of the bowl and into the pan. Spread the dough out until it completely covers the surface of the pan. Now cover the pan with plastic wrap or a lid, and let it rise for 30 minutes to an hour.

While the dough is rising in the pan, place your oven rack on its lowest shelf, as close to the bottom heating element as you can get. Preheat the oven to 450 degrees Fahrenheit. A lot of recipes say to blast your oven at its highest setting, but this recipe works fine at this temperature, which is still very hot.

As the oven is heating, prepare the pizza sauce and gather your toppings. You can use store-bought pizza sauce if you want, or you can make your own homemade pizza sauce. Here's a very simple recipe for a basic pizza sauce:

Use a strainer to drain extra liquid from the crushed tomatoes, then add them to a bowl. Mix in garlic powder, oregano and black pepper. Do not cook the pizza sauce before using it on the pizza.

When the oven reaches 450 degrees F, uncover the cast iron, and add your toppings to the dough. Spread a layer of pizza sauce across the entire surface of the dough, all the way to the edges of the pan. Don't leave a bare area for a pizza crust.

Add a thick layer of shredded (or grated) mozzarella cheese. After this, add your own pizza toppings. Use your favorite pizza toppings, such as cheddar cheese, pepperoni, bacon, ham, mushrooms, peppers, or any pizza toppings you want. After the toppings have been laid out, add an additional layer of shredded mozzarella around the entire edge of the pizza. This is done especially to create a ring of "brown cheese" around the edge of the pizza. This is caramelized cheese, not burned cheese. Finally, sprinkle parmesan cheese (grated or shredded, whatever you want) over the entire pizza.

Place the pan and pizza onto the lowest rack of the hot oven, and bake at 450 degrees Fahrenheit for 20 minutes. After 20 minutes, take the pan out of the oven and let it rest for another 5 minutes, to finish cooking the underside of the pizza.

The pizza can be sliced in the pan, or taken out onto a serving tray or rack. 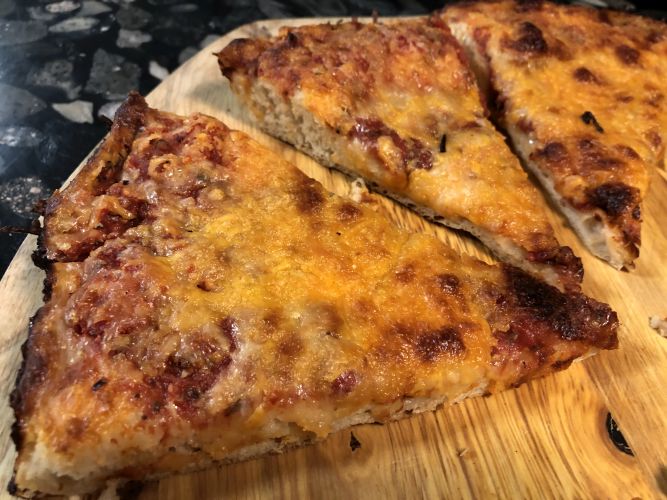