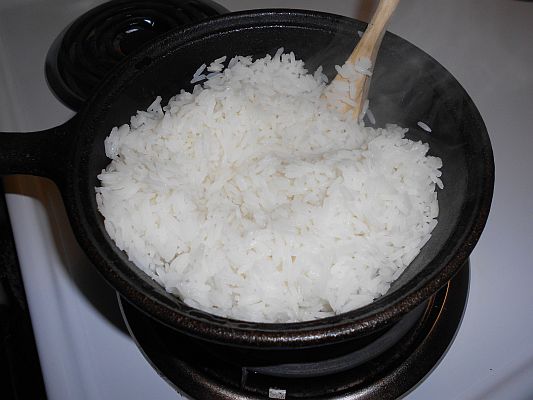 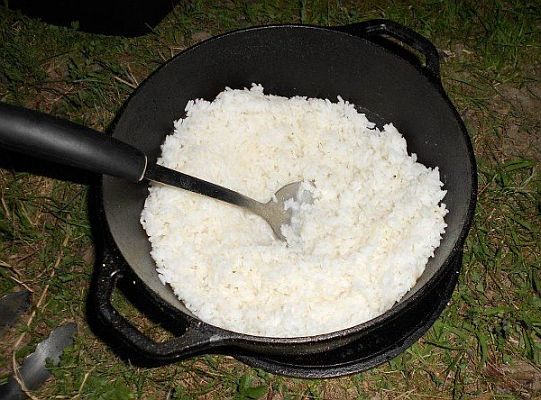 Of the many basic cooking skills forgotten by modern-day civilized folks, one of the simplest is a mystery to many – almost as mysterious as the secret of making fire! Rice, of course, is a basic staple for anyone eating on a budget: it's nutritious, it's tasty, and it's CHEAP.

When you make your rice, be sure to use a pot with a heavy lid, such as a cast iron pot. As it cooks, the rice will produce a lot of foam within the first few minutes, and if your lid isn't secure this will likely spill out of your pot and onto the stovetop burner. A heavy lid will prevent this and, even more importantly, it thoroughly pressure-cooks the rice so that your result will be minimum sticking and large individual saturated grains of rice.

Here's some advice from Jessica Darling:

"It's the easiest thing in the world!"

"Cook 15-20 minutes for white rice (depending on your stove or burner). Do not lift lid while rice is cooking. When done, fluff with fork. Easy. (I find the median time of 17 to 18 minutes works perfectly on most stoves.)

"When using brown rice, add the rice to cold water first and heat it all to boiling, then turn the heat to low and finish. White rice should be added to the water after it is already boiling.

"Also, the best way to flavor rice is to use broth instead of water. Or, cheaper than broth, crumble a bouillon cube into the water; usually one cube per one to two cups of water. Put the bouillon in the water before you heat it, so it dissolves as the water heats."

How To Cook Brown Rice

Brown rice is a horse of a different color – and different consistency, as well. Brown rice has a tougher shell that needs to be softened as it cooks, while at the same time the inside grain cain't be overcooked; or else, it becomes mush. This method will successfully cook brown rice:

Pan needed: a cast iron skillet or other oven-safe skillet with an oven-safe lid

Saute onions in butter 4 to 5 minutes, to caramelize them. Add rice (dry, uncooked) and stir until rice is browned. Add salt and chicken broth, and stir. Cover the skillet with a lid, and bake it in the oven at 375 degrees F for 20 to 25 minutes. The rice should be tender when it is removed from the oven and uncovered.

For less rice pilaf, or more, use a 2:1 ratio of liquid to rice.