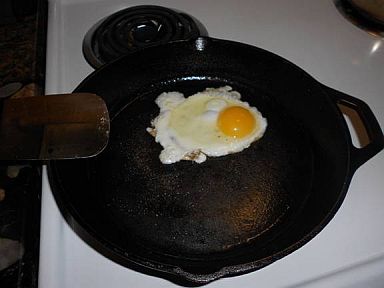 This is one of the most common questions asked about cast iron: how to get a non-stick cooking surface. A lot of people are scared away from cast iron after their first experience with it: their food sticks to the pan, and they think there's something difficult that they can't be bothered to grasp. In fact, it's amazingly simple to achieve a good non-stick surface on any cast iron pan. Here are some guidelines to help you discover how easy it is to cook anything in cast iron:

A bare metal pan will grab hot food and cause it to stick to its surface, probably burning it. Seasoning places a thin layer on the surface of the pan, and it adds additional layers of seasoning each time you cook with your pan. After only a few uses, the seasoning on your pan will be good enough to rival any pan purchased with a "non-stick" coating. The seasoning will turn your pan a dark black color, and this is exactly what is supposed to happen. (It also protects against rust!)

Nearly every cast iron pan available in retail stores, from Wal-Mart to Target to Big Lots, is "pre-seasoned." That's because the pre-seasoning proved to be a selling point for Lodge; they now pre-season all of their cast iron, and so do all of their competitors (Camp Chef, Stansport, Bayou Classic, Old Mountain, etc.). This "pre-seasoning" an adequate coating, and you can indeed cook with a pre-seasoned cast iron pan as soon as you take it out of the box. This seasoning is not as durable or layered as the black patina that builds up with a well-used cast iron pan, but it's good to start with.

Some folks feel the pre-seasoning applied to commercially available cast iron pans isn't adequate, and they prefer to begin with a bare, unseasoned pan. If you want an unseasoned pan you will probably have to buy a pre-seasoned pan, remove the seasoning, and season it yourself. Removing the seasoning isn't hard, and there are many ways to do so. My favorite is simply to scrub the entire pan with steel wool, using a mixture of vegetable oil, cider vinegar, and kosher salt. After that, you just rinse the pan off, give it a towel dry (paper towels are fine), and then season the pan in the oven. See also: Seasoning Your Cast Iron Pan

Cast iron is known for its even heating, which will sear and cook food with less burning. This is actually not accurate: a cast iron pan can have areas that are hotter than the rest of the pan. This is different from lightweight pans that develop random "hot spots," which cause the food to burn on one side while remaining undercooked on the other. Rather, the part of your cast iron pan that directly contacts the heating element will become hotter than the rest of the pan, and it will heat up faster. However, this heating will eventually affect the rest of your pan; and after a while the entire pan will be really, really hot, including the areas not touching the heating element. It simply takes longer for these "remote" areas of the pan to heat up fully.

The best way to allow your pan to heat evenly, with as few "hot areas" and "cold areas" as possible, is to heat your pan at a setting of medium heat to 80% heat (8 on a dial of 1 to 10). Heating your pan at too high a temperature won't damage it – after all, this is cast iron. However, it will cause part of the pan to reach high temperatures faster than other areas of the pan. At extremely high heat this can even cause a cast iron pan to warp, though this is unlikely to happen on a typical kitchen stove.

Heating a cast iron pan at medium to medium-high temperature will bring your pan to the proper temperature for cooking within a few minutes. 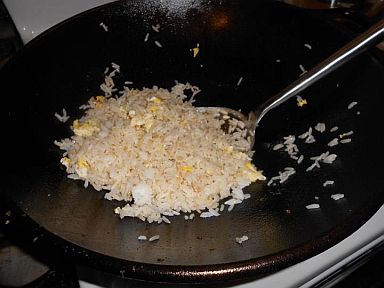 This is a Chinese proverb that offers useful advice on how to achieve a non-stick cooking surface with a cast iron pan. (This saying was also quoted by Jeff Smith, the Frugal Gourmet.) It summarizes a good method on how to heat your cast iron pan for cooking: gradually heat up the pan until it is hot enough to cook. When your pan is hot enough, adding oil on top of the hot metal will create a thin film of oil that goes into the pores of the metal, creating a "non-stick" effect. The oil then dances easily on the surface.

How to tell when your pan is hot enough to add oil: wet your fingers with tap water, and flick the drops of water onto the surface of the pan. If the water doesn't sizzle right away when it hits the surface of the pan, it's not hot enough and you need to let it heat up some more. When you flick drops of water onto your pan, and the water sizzles loudly and evaporates almost immediately, the pan is at the right temperature. After the pan is hot, add your oil. The oil will shimmer and ripple, and in about one minute it will be ready for you to cook.

I'm listing this especially to counter a long-running and popular myth that frequently pops up when someone new to cast iron asks the question "Why does food stick to my cast iron pan?" to a seasoned cast iron cook (who may have a large connection of beautiful antique cast iron pans). This myth usually goes like this: The rough surface of the newer Lodge skillets ruins your non-stick cooking! You need to find an older Griswold or Wagner pan with a smooth surface; or else you need to grind down the surface on your new pan to a smooth finish. This is not true, and there is plenty of evidence to back this up.

Antique cast iron pans from the early 20th century, including the popular Griswold and Wagner pans, were machine-tooled and polished to achieve a wonderful smooth cooking surface. This is one reason for the appeal of these pans: they look and feel beautiful, and they are a joy to cook with. They're also somewhat less heavy than the modern-day cast iron pans produced by Lodge, Camp Chef, Old Mountain, and all of the other companies producing cast iron these days. When you have one of these older skillets on your stovetop range, you'll feel the difference right away – it's well worth the effort to acquire one of these pans.

However, the modern-day cast iron pans from Lodge and other companies are also superior cooking tools. They're heavier than the antique cast iron pans, and they do indeed have more of a grained surface; but that does not mean they are inferior for cooking. It just means they're a little different. As with any cast iron pan, the best way to begin cooking with a new "modern" cast iron pan (including Lodge) is to cook foods that add to the seasoning of the pan, especially greasy meat such as pork and bacon. Be sure to use the tips listed above: use a seasoned pan, heat your pan gradually, wait until the pan is hot before adding your oil. After only a few uses, your cast iron pan will take on the legendary black non-stick patina that it's known for.

If there's any pan I would recommend as your very first cast iron skillet, it would be the Lodge 12-inch skillet because it's cheap (less than $20.00 USA at Wal-Mart), it provides a very wide cooking surface, it is "pre-seasoned," and its heavy construction guarantees it to last the rest of your life. Get one of these, then go ahead and start cooking with it. If you want to use to sandpaper to smooth your new Lodge Logic skillet, go ahead and do so. It will look shiny and very pleasing to the eye. But it is not necessary to grind down the surface of your brand new cast iron skillet in order to get a non-stick surface. All that needs to be done is simply to cook with it! Have fun cooking lots of greasy foods, and the seasoning will build on your pan over time. Then you'll see what a well-seasoned cast iron pan can do…and you'll have a pan you'll treasure for the rest of your life.