Watch this on YouTube: The Dangers of Cast Iron Cooking

Take down your smoke detector. This method produces a lot of smoke!

For this method, you'll need two plates: one to marinate your steak, and one dry plate.

Place the cast iron skillet in your oven and turn the heat to 500 degrees (F) to preheat. Pour a layer of balsamic vinegar onto a plate; you only need an eighth of an inch or so covering the plate. Place the steak onto the plate, and marinate the steak in balsamic vinegar for at least 15 minutes on each side, turning it over after 15 minutes to ensure each side is marinated. When the oven reaches 500 degrees, put the steak onto the dry plate, and coat each side of the steak in cracked pepper. Turn on your stovetop burner to its highest setting. When the stovetop is ready, take the pan out of the oven (with heavy gloves!) and place it on the burner. Sprinkle kosher salt onto each side of your steak. In order to avoid the salt taking the juice out of the steak, it's important to salt your steak right before you put it in the pan – don't wait too long and leave the salt on the uncooked steak.

Use tongs to place the steak into the pan – don't use your hands. Don't risk burning your hands on that hot iron pan!

Sear the steak for 2 minutes 30 seconds on the first side. DO NOT poke, prod, or move the steak as it is searing – it will develop a blackened crust. This is exactly what is supposed to happen.

While the steak is searing, turn your oven temperature down to 400 degrees F. It will not immediately set the oven to 400, but the temperature will slowly decrease while your steak cooks.

Cook the second side for another 3 minutes. Take the pan out of the oven, put it on your stovetop (remember, it's still blasting hot!), and use tongs to place the steak onto your dry plate.

Deglaze the hot pan: pour the extra balsamic from your marinating plate into the pan, where it will sizzle and bubble. Use heavy gloves to lift the pan, and with a metal spatula scrape all of the drippings from the pan onto the steak. Cover the steak loosely with a piece of foil. Wait 10 minutes. This will result in a wonderful medium rare steak.

December 15, 2011: One year ago, I celebrated my one-month anniversary in my new apartment by cooking in cast iron for the very first time. I've already talked about this pan here, my "redneck pan:" a Lodge 10-inch skillet with a huge Bass Pro Shops logo embedded in the bottom. At the urging of a close friend, I'd salvaged that pan from the top of a kitchen shelf in my old apartment, where it had sat unused since the day it was given to us. It was coated with eight years' worth of dust, and it was rusted all along the bottom. One year ago, I posted this message on Facebook:

"One month anniversary in my new home! Time to celebrate tonight…with steak! And yet another first – I'll be breaking in a cast-iron frying pan that was given as a present, and never used over the course of several years. I salvaged it from the old place before leaving, and it had a thick coating of dust on it. It was "pre-seasoned," though; even after all that time, when Morgan helped me season it, the first coating of oil burned when we heated it up. It should come out fine now, though; I made sure to season it with oil a week ago. The pan's label said it was a Lodge, but Morgan thinks it's some other brand that paid Lodge to put their logo on it.

"Steak is an exception to the frying pan rule. My favorite way to cook steak is in the frying pan, with the heat on to about 1/2. I constantly poke and prod it with a fork, and flip it every couple of minutes. It takes about twenty to twenty-five minutes to cook that way, but it cooks thoroughly and is delicious.

I also don't flavor or season the steak when I cook it; I just let it cook in its own juice. When I was really young I used to always drown my steak in worcestershire sauce – another sin to atone for! Worcestershire sauce may be tasty, but there's nothing like the taste of a well-cooked steak, with nothing but pepper.

AAAUUUGHHH! My "favorite way" was to poke and prod it and let out all the juices?!?! Well, that's what I wrote on that night…the night I was seduced into the cult of cast iron. So tonight, I celebrated my cast iron anniversary by cooking a steak in that very same pan. However, there was a difference between my cooking it a year ago and cooking it now. For starters, the "redneck pan" is well-seasoned and mostly black, the way a cast iron skillet should be. I'd selected my steak by cut – boneless rib eye. The method I used tonight was definitely NOT to "constantly poke and prod it with a fork." Instead, I prepared by marinating the steak with balsamic, as I heated up the oven (with the pan inside) to 500 degrees F. and turning the stovetop on to high. Just before putting it on the pan, I gave each side a coat of freshly ground pepper. I'd read a suggestion that salting your steak tends to dry it out if you let it sit, and supposedly you should apply kosher salt to the pan itself; so I gave that a try. The kosher salt blackened, of course, but it helped to put a nice crust on the steak.

And the steak hit the pan, filling my apartment with smoke.

I'd prepared for this by taking down the smoke detector (mandatory with a lot of my cooking these days!). This was a thick piece of steak, so I seared it for 2 minutes 30 seconds on the first side, then flipped it and seared the other side for 2 minutes. I set the oven temperature down to 400 as the steak was searing, though it wouldn't drop to 400 immediately. Before putting it in the oven, I dropped a few mushrooms into the pan around the steak, to cook alongside; and I put the pan into the oven at 3 minutes for each side. Then out of the pan and onto a plate. I dropped a bit of balsamic into the pan to deglaze it, where it bubbled nicely, and scraped it all out of the pan and onto the steak; then came a foil tent and the agonizing ten minute wait. I sat down and began writing this message as I waited.

And the result was…WOW! I was afraid the blackened crust would give a burned taste to the steak. Anything but! The steak cut easily, and it was a good medium rare, with red in the center and a cooked layer around it. The taste was wonderful! The outer crust was very slightly crunchy, with NO burned taste at all, and a moist, tender interior bursting with juicy and meaty flavor. I didn't add any pepper at all, nor anything else to lessen the natural taste. The taste didn't need enhancement; I was thoroughly sated. The mushrooms were damn tasty, having cooked in the balsamic and and soaked up some of it. The end result of all this effort: in the same 20 to 25 minutes I spent poking and prodding at that steak last year, I came up with a seared meaty delight. I'm ecstatic at how this one turned out. It was a great way to celebrate my cast iron anniversary, by cooking what I think was the best steak I've ever cooked. So far. 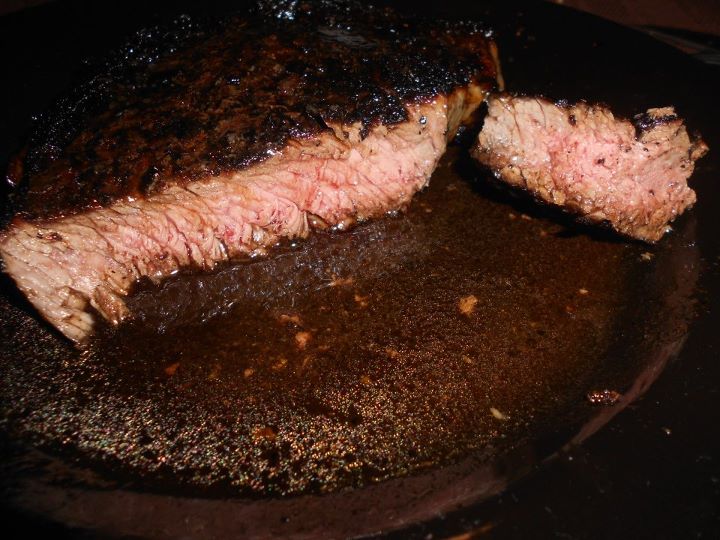