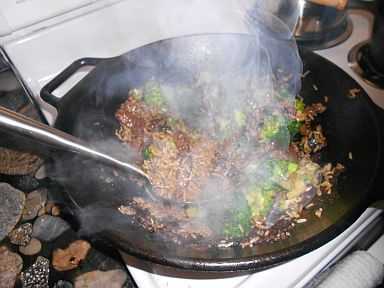 If there's one kind of cooking that approaches the idea of "cooking magic," that would be wok hei. This is a style of cooking developed centuries ago in China's Canton province, one that elevates the wok stir-fry to a mystical level. Because Canton has a climate that often sees temperatures going over the hundred degree (Fahrenheit) mark, cooks in this region learned long ago to do their cooking very quickly, so as to spend as little time as possible over a hot stove and wok. Over time, the stir-fry technique developed by the Cantonese masters became legendary, and a "mystical" quality was seen to develop in their best stir fries. This became known as wok hei (pronounced "wok hay") – the "breath of the wok." "Hei" can also be read as a type of qi ("chi"), and it is described as an energy imparted into the food by rapid stir-frying at very high temperatures. As a result, wok hei is seen as adding a rare, well-seared taste to the food. It's not an "ingredient" per se, but rather an experience or a goal: the best Cantonese stir fry is the one that gives your food the taste of wok hei.

Cantonese stir frying stoves are used to heat cast iron woks (sometimes carbon steel, but usually cast iron) at incredibly high temperatures of hundreds of degrees F – often far more than a stove at home can achieve. Because of this, it can be very difficult to achieve wok hei in your home stir fry, especially if you're cooking on a typical Western-style electric stovetop. But the experience of wok hei is a goal to reach for, and maybe attain, because it results in some wonderful tasting food – a delicacy far beyond what you get with typical Americanized "Chinese takeout" fast food.

I use a heavy cast iron wok as opposed to the traditional lightweight wok, and this alone is considered blasphemy in the eyes of many Cantonese stir fry masters. However, I like the weight of the wok, because it allows the wok to remain sturdy on my electric stovetop, and I only have to adjust it occasionally as I cook. Also, I'm able to preheat the wok in my oven to 500 degrees; from there, I heat the stovetop range to its highest setting, slam the blazing hot wok onto the stovetop, and sear my food right away before the wok has time to cool. The resulting temperature may not approach the blasting heat used in Cantonese stir fry restaurants, but it still allows me to sear my stir-fry at a high temperature in a manner that allows me to do an entire stir fry in only a few minutes.

Here's an example of one of the most common stir-fry dishes made in wok hei fashion: a simple beef and broccoli stir fry, with rice. Variations on this dish are also used with chicken or pork instead of beef, and other types of vegetables such as baby corn and water chestnuts (I prefer broccoli and carrots, personally). The traditional stir fry procedure is used here on a high-temperature wok; and the result, when done correctly with practice, is a magical, tasty dish that approaches the mystical sensation of wok hei.

Preheat a heavy cast iron wok (as noted above) to 500 degrees; this may take 45 minutes. If you use an electric stove, turn on your stovetop burner to its highest setting, so that it is red-hot when you are ready to stir fry.

Cut the beef across the grain into thin strips, about 1/4-inch thick. Add the dark soy sauce, 2 teaspoons peanut oil, salt, and corn starch. Marinate the beef for at least 15 minutes. Pour 3 tablespoons of peanut oil into a small cup or shot glass, so that it can be quickly added to the wok when needed.

While the beef is marinating, prepare the vegetables. Chop the broccoli, rinse under warm running water, and drain the water. Prepare the ginger in a small cup or shot glass, so that it can be added quickly to the wok.

Prepare your rice: bring the water to a roiling boil in a covered iron pot. Stir in the rice. Set the stovetop to low heat, cover the pot, and simmer the rice (without stirring or removing the lid!) for 15 to 20 minutes, depending on your stovetop. When the rice is ready, remove it from the pot and put it into a bowl, so that it can be added to the wok when ready.

Take the hot wok out of the oven and place it on the red-hot burner. Let it heat further for about a minute, then add 2 tablespoons of peanut oil: spoon or pour the oil around the sides of the wok and let it run down the sides – do not drop the oil into the center of the wok bottom. When the oil is hot, add the beef. Lay the meat flat, don't touch it, and let it brown for a minute. After a minute, stir-fry the beef until it is browned and nearly cooked through. Remove from the wok and place the beef into a bowl.

Add the beef back into the wok. Mix everything together until the rice is brown instead of white. Add a shot or two of hoisin sauce, again around the sides of the wok, and mix the stir fry around until the sauce is completely mixed in and the rice is a darker brown color. Turn off the stovetop range, and use the wok shovel to scoop it the stir fry out of the wok and into a large serving bowl. Serve while still hot.