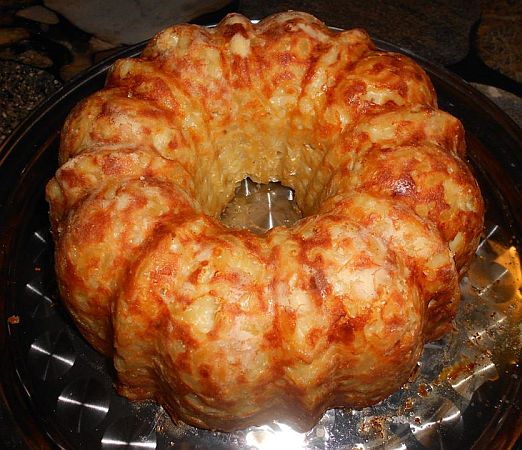 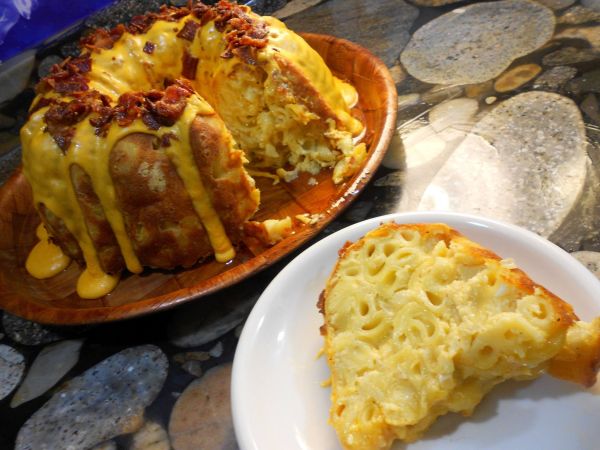 This was a recipe that showed up on the secret Cast Iron Bundt Bakers Anonymous Facebook group. I could not rest until I'd given it a try. Mac and cheese cake! Mac and cheese in a cast iron bundt pan, topped with a cheddar cheese ganache. My success rate at making ganache has been very low, but this turned out to be the easiest and most successful one so far.

Pans needed: Stock pot or large saucepan to boil macaroni. Large saucepan or dutch oven to prepare the cheese roux; this pot must be large enough to mix in the cooked macaroni. Heavy bundt pan for baking the cake. And a second (or third) saucepan, or a medium to large sized skillet, for preparing the cheese drizzle for the cake. (That makes three saucepans plus one bundt pan.)

Cook four slices of bacon until crisp, move the bacon to a metal dish or bowl, then break them into small pieces. These bacon pieces will be used to top the finished cake.

Cook macaroni to al dente: boil the pasta in salted water until it still has a bit of a chew, but it is definitely not hard. Drain and set aside to cool until it is room temperature.

Prepare the cheese roux by melting butter in a large heavy saucepan, or dutch oven. Add chopped onion and garlic, and cook until the onion begins to caramelize, about 5 minutes. Stir flour into the mixture. Add cream, mustard, and paprika. Using a wooden spoon, mix everything together. Fold in cheddar cheese and mix until melted.

Coat inside of the bundt pan with oil or cooking spray, and flour.

Beat eggs in a small bowl. Add salt and stir. Mix eggs into cheese mixture. Fold in macaroni. Mix half a teaspoon of basil into the macaroni and cheese.

Spoon the mixture into the bundt pan. Bake at 350°F until the top is firm to the touch and a toothpick comes out clean (about 50 minutes).

After removing from the oven, the bundt pan only needs to rest for a minute or two, before being flipped and removed. Unlike a typical cake, you don't have to wait for the cake to settle in the pan.

Prepare cheese drizzle: heat 1/2 cup of heavy cream in a cast iron skillet, and mix in 8 ounces of shredded cheddar, stirring until it is all melted. Add extra cream or milk until it reaches the consistency of the caramel seen in candy bar TV commercials. Stir paprika into cheese sauce for extra flavor. Pour over the macaroni cake, and top with crumbled bacon pieces. Let it settle for a few minutes before serving. 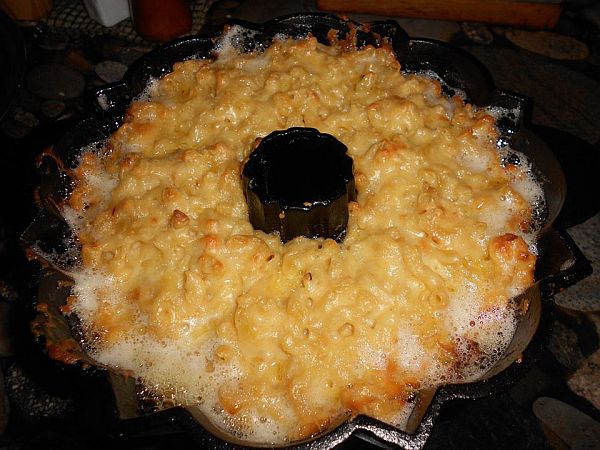